Anatomy of a joint: On the way to define a standard cannabis unit

A study conducted by three UCL researchers aimed to compare self-reported and actual doses of cannabis and tobacco in a joint, and how these are influenced by controlled acute administration.

This study was effectuated with 24 recreational co-users of cannabis and tobacco during four different sessions. They were initially asked to measure out the amount of cannabis and tobacco they would put in a joint for themselves (dose per joint). One hour after drug administration in each session, the participants were asked to reiterate the operation for a joint that they would want to smoke “right now”. This paradigm, called “roll a joint”, was designed to assess both the typical dose of tobacco and cannabis per joint at baseline, and desired dose one hour after drug administration. 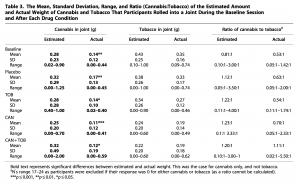 These findings also show that both cannabis and tobacco amounts decreased after intoxication, suggesting that this paradigm is sensitive to acute satiety. However, participants were only able to estimate that they were using less tobacco, but not less cannabis, “which may imply they were aware of their satiety to tobacco but not cannabis” according to the researchers. “This may be a consequence of the lack of information about cannabis due to non tolerated sales, which means a greater level of uncertainty regarding potency and the total weight of cannabis bought (e.g. an eighth of an ounce may not actually be what the user receives)”. The same problem did not apply to tobacco probably because it is sold in standardised weight and is therefore potentially easier to estimate. The study warns that “it is important to note that tobacco and cannabis differ in their appearance and typical dose per joint, which may have influenced accuracy; however, these factors were not manipulated and therefore were unlikely to account for the results of the study”.

The authors underline that their efforts in trying to define a standard unit of cannabis similar to a standard unit of alcohol is limited by several factors. Firstly, a previous study has found that recreational users have a poorer understanding of cannabis potency than heavy users, which would require the conducting of another study for such a group. Secondly, their study included only 24 people, a number too small that limits the generalisation of the study. Thirdly, the authors warn that only dosage has been studied in this research, thus the authors recommend that future research should take both dosage and potency into account. Indeed, the potency of cannabis after administration could have significantly changed both the self-estimated and actual doses of cannabis and tobacco in the joints.

Even though many States have already legalised cannabis for either (or both) recreational or medical use, it is important for policy makers and researchers to know how much cannabis is in a joint. This will help them apprehend the issues related to cannabis more clearly and allow for more relevant and accurate policy making and research to be done.

This study was conducted by PhD student Chandni Hindocha, Doctor Tom P. Freeman, and Professor H. Valerie Curran from the UCL Clinical and Psychopharmalogy Unit and is available here.

Drug-Related Deaths In Scotland On The Rise