This week Volteface examines the emerging and seemingly booming CBD industry. In this piece we had the opportunity to discuss the topic with Paul Moore, patient advocate and Chief Executive Officer at Green Machine CBD.  Moore discussed the vast potential applications and benefits that the CBD business offers to both the UK and Europe.

CBD is a non-psychoactive compound found in the cannabis plant. Unlike THC, CBD is legally sold over the counter as a wellness product or ‘novel food’. As aforementioned, due to not having psychoactive properties, CBD products will not get the user ‘high’. Whilst this classification as a novel food forbids companies from making medical claims, the product is licensed in two MHRA-approved medicines, Epidiolex and Sativex.

Whilst novel food companies cannot make medical claims, this has not stopped CBD users from reporting a plethora of benefits. Popular belief in this new-age medication is undeniable: In the first four months of 2020 alone we have witnessed £150 million pounds spent on CBD products in the UK alone. This interest in the emerging CBD industry is further reinforced by the 8 million British citizens who now buy CBD products.

CBD is now legal and available in over 10 countries including the UK and USA, while almost all other cannabinoids in the UK are controlled substances under the Misuse of Drugs Act 1971.

However, while this certainly indicates an interest in these products, this is far from evidence of their legitimacy. We have all seen the huge emergence of beauty and culinary CBD products in the UK, however what do these products really do? Is there any real benefit? Or is this just another industry ‘cash grab’?

Mike Power writing for the Guardian in 2019 refers to CBD salesmen as the “snake oil salesmen of the modern wild west” citing many examples of the undeniable ‘cash grabs’ which have emerged from the CBD industry. The most notable example was the sale of ‘CBD water’ sold in clear bottles resulting in the CBD swiftly degrading due to the sensitive nature of the compound.

By Power’s own admission, however, the health benefits of CBD (like THC) are undeniable as we have seen by not only the reforms in the UK but across the world.

The World Health Organisation in a 2017 report found that “CBD could provide relief for a variety of debilitating conditions including Alzheimer’s disease, Parkinson’s, multiple sclerosis, cancer and diabetic complications, as well as general pain, anxiety and depression.”

The findings of this report have only been further reinforced by the animal testing of CBD products. As these studies indicated, CBD could be used to treat a multitude of medical conditions. These range from Alzheimer’s, Parkinson’s, Huntington’s disease and even a reduction in the growth of cancer.

It is important to highlight here that we live in a free market society. Thereby in any industry some ‘cash grabs’ will emerge, particularly when there is lots of money to be made. Thus these ‘cash grabs’ do not diminish the value of legitimate CBD brands. One such example of a legitimate CBD brand to flourish since the initial boom is CBD business Green Machine, run by Paul Moore.

Volteface spoke with Moore about how he became involved in the CBD industry and the challenges that CBD businesses in the UK face in 2021. 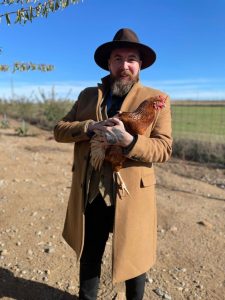 Moore began his journey in 2016 after he was diagnosed with rheumatoid arthritis. Doctors told Moore that his only option was strong steroids and treatment which would leave him hospitalised for 2 weeks every 2 months, as well as wheelchair bound just 6 months after starting his initial treatment.

When exploring alternative medicines, Moore personally witnessed the vast power and application of cannabis-based medication through CBD. As previously mentioned, while other cannabinoids remain illegal in the UK, CBD is not and therefore Moore saw an opportunity to help others just like him in a legal and safe environment. Moore went on to open not only his first CBD store but additionally the UK’s first CBD dispensary in 2017.

When opening a CBD business, Moore emphasises that his primary goal and intention is to support medical patients being failed by traditional clinical medical treatments. Moore also highlights the important role CBD businesses and their owners play in educating the public on cannabis-based medications and their legitimacy.

“When entering local communities Green Machine was met with the same criticism one would expect from opening a new cannabis based business. These complaints largely stemmed from parents considering me as some kind of ‘drug dealer’ accusing me of encouraging drug use. However rather than arguing with these individuals I would offer them to sign a petition for my shop’s removal. I did this under the condition they would sit down for a coffee and give me the opportunity to educate them on what my business does. If they were still unsatisfied, they were welcome to sign the petition.”

This education and patient-focused attitude have clearly succeeded as Green Machine is yet to have a single store removed. Additionally, Green Machine is now expanding to 13 stores by 2022. The company currently holds 10 stores across the UK with 7 located in London alone.

However, while Moore and his business have been met with huge success, unfortunately UK and global legislation makes running CBD business a difficult task. The first legislative obstacle highlighted by Moore is the ‘novel foods status’, where a novel food is defined by food.gov to be as follows.

“Novel foods are foods which have not been widely consumed by people in the UK or European Union (EU) before May 1997. This means that the foods don’t have a ‘history of consumption’.”

The issue here is any food that is dubbed ‘novel’ as a result of this definition is then required to be authorised before they can be placed on the UK market. In order to gain approval a novel food therefore must follow one of the two routes retained under EU law, a traditional food notification or a full application.

As of 2019 CBD was classified a novel food and therefore any CBD extract products must apply for authorisation using the procedure for full applications outlined on the government website. This adds an additional challenge for CBD businesses in the UK; with ‘red tape’ and testing standards set so high, it is virtually impossible for small businesses to accommodate.

This is evident by the fact as of April 2021, over a year after the novel food applications were requested from CBD business; only three businesses have successfully qualified. Moore additionally highlights that this constant need to tamper with CBD-based products to render it acceptable for the novel food requirement diminishes the medicine’s efficacy..

“Think of it like frying broccoli. If you cake it in oil and fry it you’ve lost most of your nutritional benefits. In the same way if you put THC or CBD product’s through intense clinical processes you are losing some of the product’s benefits, for example in the UK when medical cannabis is blasted with ionising lasers resulting in worse quality cannabis for medical patients.”

Interestingly, while a patient advocate and Cancard holder, Moore was not always a cannabis advocate. In his younger years, he recalls friends and family being consumed by cannabis, and  was subsequently apprehensive to engage with the drug. However, through research following his diagnosis it became increasingly clear that cannabis did not take his friends’ lives away- Rather the responsible party was outdated laws and legislation which have flooded UK streets with dangerous and poorly prepared drugs. We can see evidence of this thesis in a study conducted by King’s College London, which found that 95.9% of seized cannabis in London in 2016 was ‘Sinsemilla’ or ‘Skunk’.

When speaking with Volteface, Moore highlighted how the potential benefits of cannabis range far beyond the physical and mental health of individuals. Moore has now begun investigating how cannabis and hemp can be applied in sustainability efforts to craft a more environmentally friendly and sustainable future. These discoveries have come through his new venture ‘Viken Eco’.

Named after the beautiful village Viken in Sweden currently being damaged by the effects of climate change, this venture focuses on the vast sustainable applications of ‘hempcrete’ for both the construction of houses and their insulation. Moore will additionally be donating the proceeds from this venture to charities working to save animal habitats and building coastal erosion solutions.

Hempcrete is a sustainable substance made from the stem of hemp plants being mixed together with a binder. Hempcrete acts as an excellent building material as it can be both mixed on site and pre-cast off site to form blocks or panels. In addition to being very hard and self-supporting once set, hempcrete is not load bearing, due to the air trapped within the material and the slightly flexible nature of the hemp shiv aggregate. Hempcrete additionally holds a medium density, which means it provides both insulation and thermal mass within the same material.

Moore’s words and insights only further highlight how underused and explored the vast potentials of this plant are. Therefore, one can only conclude that to dub CBD as a ‘snake oil’ seems to ignore both clinical and academic evidence, and patient testimonials.

Moore himself was told he would be left wheelchair bound just 6 months after his available NHS treatments, yet through the power of medical cannabis and CBD treatments, Moore has been able to continue not only walking but creating a life supporting and sustaining business.

An amendment to this piece was made on December 3rd.

The New Leaf: Time to embrace this burgeoning industry, before it’s too late

All You Need To Know About Drug Decriminalisation