Diversion isn’t controversial – when will media depictions begin to reflect this?

Criminalising young people for low-level drug possessions has never led to anything beneficial. The desire to appear ‘tough on crime’ has only perpetuated and increased criminality – particularly amongst young people. The current approach is a failure, doing nothing to prevent reoffending, or tackle problematic drug use.

Over the last few weeks, diversion schemes have received a significant amount of attention, following the leaked announcement of a pilot scheme to be trialled in Bexley, Lewisham and Greenwich.

Despite being a seemingly uncontroversial topic, diversion has sparked debate amongst the media, politicians and the general public.

Perhaps unsurprisingly, the commentary that has erupted over the last few weeks has upheld little benefit to the importance of diversion, instead of focusing on evidence, media focus has been on questions of morality and ideology.

Drug policy is a contentious topic and remains morally charged; people do not sit idly by when it comes to a discussion on drugs, everyone has an opinion, a fact that’s been evermore evident in the last few weeks.

Ignorance has ensued around what diversion actually means, demonstrating a lack of desire to engage with drug reform. Sensationalist headlines took the spotlight, claiming Sadiq Khan is to legalise ketamine, speed, and cannabis across London – none of which was true.

Not only does this spread fake news, it polarises people further on a topic already perceived to be controversial. Drugs may be a ‘gritty’ subject that gets a debate going, but this sort of coverage does little to advance sensible reform. 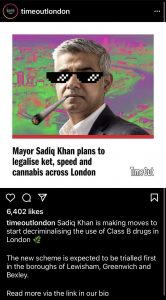 Conflating all of these issues into the bracket of ‘legalisation’ helps nobody. There are a significant number of interventions that can be implemented to reduce the harms of drugs without full-blown legalisation.

The media and policy makers have managed to move the conversation around diversion away from the core values of protecting young, vulnerable people, and toward the nebulous harms of legalising all drugs.

MPs writing to Sadiq Khan requesting the scheme to be dropped demonstrates another gap in understanding. Arguing it will inflame violence is absurd, given the scheme is only applicable to low-level possession offences. The scheme, really, is looking to prevent crime and tackle problematic drug use at its core.

It is surprising MPs have come out against the scheme given diversion is already happening across the country, in their constituencies, and accruing real-world evidence that they are in fact preventing crime. Diversion schemes are not new.

Diversion is also in line with the UK’s Drug Strategy, looking to treat drug use as a health issue and divert people away from criminality and the criminal justice system. The responses have demonstrated the reactive nature of drug policy – individuals coming out against it because they immediately feel some kind of moral infringement.

We’ve learnt a lot more about people’s immediate reactions and feelings about drugs, rather than considering reflection on what is actually being proposed.

We’ve also seen a massive gap between what politicians believe and what the public want. YouGov’s poll revealed a majority of Londoners across the political spectrum support the scheme. There is a consensus amongst the general public that the current approach is not working.

Despite drug policy being a contentious topic, the public appear to be coming round to the fact that criminalising young people needs to stop. The disconnect between politicians, media and the public has got to change.

It is worth noting that the scheme is a pilot, which means it is not implementing widespread policy change, rather, looking to gather evidence to better inform policy.

We are seeing similar schemes launched elsewhere, for example, drug treatment charity With You has partnered with the University of Kent to launch Re-Frame, a pilot randomised controlled trial (RCT) diverting young people in possession of drugs in Cornwall, Kent, Lancashire and Sefton. What is particularly unique about this programme is the use of an RCT to evaluate its effectiveness.

Evidence gathering is an essential part of implementing better policy, particularly given the lack of a robust evidence-base in the UK regarding what works in terms of diverting young people away from the criminal justice system. Initiatives like this are crucial in providing evidence about the effectiveness of preventing reoffending and reducing the risk of violence.

We are seeing diversion schemes already set up across the UK, helping to provide an alternative to criminalising low-level drug offences and instead providing mental health support, whole family intervention, drug education and treatment.

Criminalising is an impractical solution and does little to rehabilitate. Whereas, diversion schemes take a proactive approach to drug use, understanding the root cause to why someone might be in possession.

We have got to move past the simplistic view that criminalising  young people for possessing drugs is tackling crime. We cannot arrest our way out of this problem – criminal punishment drives the cycle of reoffending further by not providing vulnerable people with the support they need.

Cannabis certainly is not a harmless drug, but a criminal record for a young, vulnerable person is significantly more harmful than possessing a bit of weed.

Diversion is not a contentious topic so let’s stop perceiving it as one.

This piece was written by Katya Kowalski, Head of Operations at Volteface. Tweets @KowalskiKatya

The ‘Levelling up’ Agenda Must ‘Level Down’ Drug Deaths