What does the new MHRA guidance mean for the cannabis sector?

And what does it mean for patients?

On 16 November the MHRA published a blog post outlining the guidance for companies applying for approval for unlicensed cannabis-based medicines in the UK. In this article we unpack the guidance and what it means for companies hoping to enter the cannabis market.

The clarification came in response to an increasing number of companies with no previous pharmaceutical experience making applications to cultivate, process and manufacture cannabis-based medicines. This resulted in a ‘chicken and egg’ situation when it came to obtaining a licence, as companies wishing to manufacture required authorisation by both the MHRA and Home Office, however this was not possible as each process required some aspects of the other. Therefore, this resulted in companies being bounced endlessly between the two authorities.

Therefore, discussions began between the MHRA and Home Office as to how a ‘joined-up’ approach could be achieved which addressed the needs of the industry whilst meeting the regulatory needs of each department.

The agreed upon approach for companies that are new to the industry is now as follows: 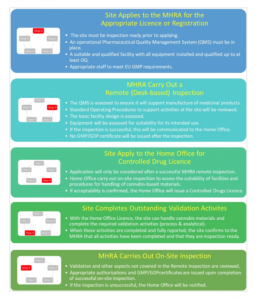 What does this mean?

Industry leaders have previously called for a ‘joined-up’ approach that targeted the confusion caused by the ‘chicken and egg’ scenario and prevented interest in domestic medical cannabis production.

For some, the update has represented a step forward towards the government recognising the potential of the medical cannabis sector in terms of economic growth and boosting the health of the nation.

One thing made clear by the MHRA is that ‘supply chain visibility’ is a top priority. This means that all stages of the supply chain will face scrutiny, including after the product has been sold. Therefore, the clarified framework clearly revolves around the product and not just the process.

According to the Centre for Medical Cannabis (CMC), it is hoped that this increase in transparency will encourage investors, thus laying the foundations for domestic cultivation, production and manufacturing of medical cannabis.

However, the update states that: ‘at the point of application, you should have all necessary systems, equipment, and procedures in place’. This appears to be in response to the issue of applicants making submissions without their facilities being ready for inspection. This was undoubtedly incredibly frustrating, however the clarified guidance now means that companies will have to do a huge amount of fundraising and have fully built facilities before making an application for a licence. Moreover, there is also no guarantee that an applicant would be granted a licence at the end of the process. Therefore, this may potentially deter new entrants to the medical cannabis market in the UK.

Although this appears to be part of the government’s plan to create a ‘pharmaceutical path’ for medical cannabis in the UK. Therefore, rather than simplifying the process to attract new entrants, the plan may actually be to focus on a serious pharmaceutical framework and product, thus deterring some companies and ensuring that only those who are fully serious and determined remain.

Could Czechia become the next European country to legalise cannabis?