France have started to enforce a law preventing cigarette companies from including their logos on packaging, Gawker reports:

Nothing is more antithetical to the aesthetic of a French new wave film than a packet of cigarettes labeled with grotesque images of rotting body parts. Except, perhaps, a pack of cigarettes with no branding on it at all.

The French Health Ministry announced at the end of March that smoke shops throughout France will have to vend cigarettes in plain packaging, free of logos. It’s a lot to ask of the country that gave us Gauloises, Gitanes, and a rich cinematic history of chain smokers with flawless skin.

Cigarette vendors must make the switch by the end of this year, in accordance with a law passed at the end of 2015

This legislature, which is also gaining ground a little closer to home, has the Tobacco industry absolutely fuming. Most recently, Japan Tobacco, who own a number of brands (most notably Camel) have appealed against the law in court. 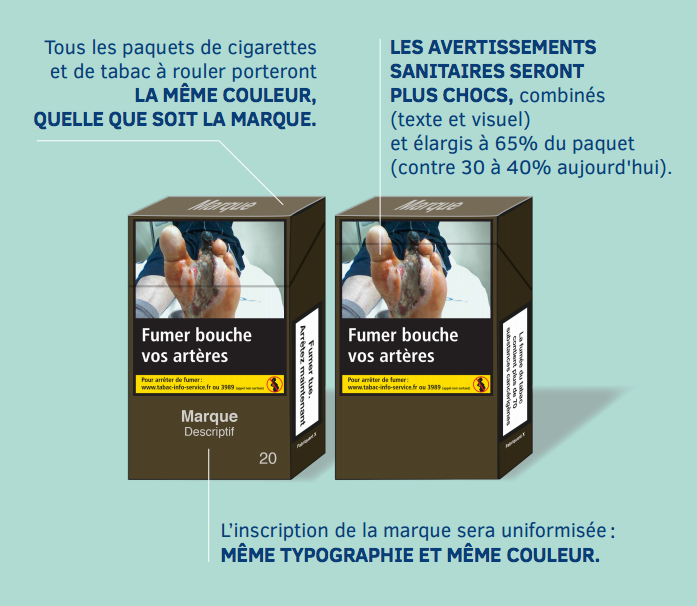 Vox capture the consternation of the French people in their commentary. Politician and citizen alike have found a common enemy in this threat to that time-honoured gallicism:

As with most cigarette regulation in France, mandating branding-free packaging was not an overwhelmingly popular opinion. After all, this is the country of famous chain-smoking artists and philosophers – a history the French hold near and dear to their hearts.

‘Tomorrow, fundamentalists will demand a neutral bottle for wines. Then neutral cheese’

Smoking rates are plummeting across Europe, and these developments mark a transitional point in the old battle between corporate and governmental influence, as far as public healthcare is concerned.

As is the way of today’s world – Cigarettes are going ‘digital’. Smokeless, sterilised vaporisers have outmuscled their analog counterparts (ashes, butts, and nasty smells…), proving the superior fit for the Age of Apple.

Furthermore, recent generations have been schooled in the dangers of Tobacco consumption, and, as a result, are thumbing their noses at their more tobacco-happy elders in greater numbers than ever before.

And tobacco companies should be scared—studies show that logo-free cigarette packaging lowers smoking rates, mostly by discouraging non-smokers from taking up the habit

The pristine, sparkling lungs of the French youth may invite the scorn and envy of their parents, but France would never have arrived at this point without considerable support from its senior healthcare officials.

The Verge remind us that, all surprises and ever-so-slightly Francophobic quips aside, the law represents a step forward for the wellbeing of French people.

‘We can’t accept that tobacco kills 73,000 people every year in our country — the equivalent of a plane crash every day with 200 people on board,’ Health Minister Marisol Touraine said after proposing the legislation in 2014

With the stats hidden in plain sight, the tug-of-war between Public Healthcare and Big Tobacco carries on.

(Almost) Out of Sight (Not Quite) Out of Mind

From Harm to Psychoactivity: The Upside of The 2016 Psychoactive Substances Act?