Last week VolteFace hosted a panel of experts discussing the escalating drug problem in UK prisons and their proposals for reform.

The night opened with a screening of the BBC footage from inside HMP Wandsworth, the result of unprecedented access granted to the BBC by the Ministry of Justice.

The event was held in association with the Howard League for Penal Reform and Law Enforcement Against Prohibition (LEAP UK). 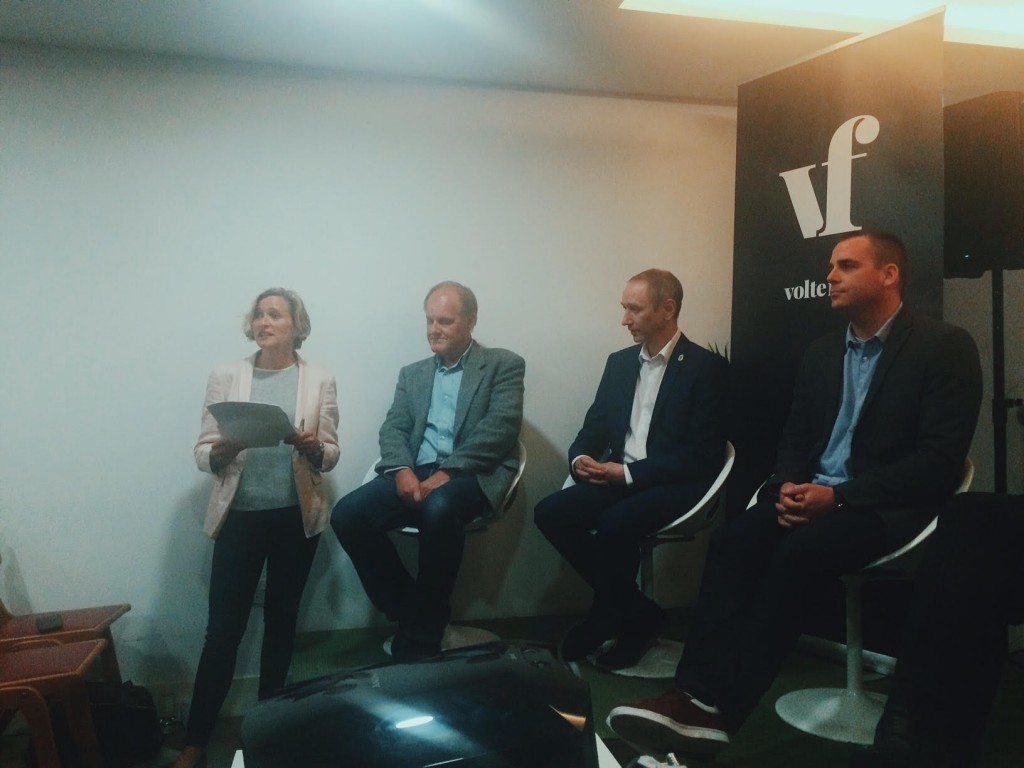 Philippa Budgen, independent media consultant and former BBC journalist, hosted the evening and opened the debate by giving the floor to Eoin McLennan-Murray, former President of the Prison Governors Association and now a Howard League trustee. Eoin was quick to point out that:

Just under 50% of the prison population are serving a sentence for drugs or a drug related offence.

Eoin went on to explain that the current strategy is to curtail supply and reduce the demand. Supply is dealt with by legal measures and security measures. The theory is not bad, but the outcomes are very poor and getting worse.

We have to move to the position where we control the supply of drugs, because while it stays in the hands of the criminals, we will never manage to get on top of the problem.

On the demand side we have to take a longer term approach… Why don’t we, as a pilot, supply drugs to those who need it, remove the violence and see what happens.

Neil Woods, former undercover Drugs Detective Sergeant and Chairman of LEAP UK, drew on his experience to explain the drugs industry in prisons as it operates under prohibition:

Debts built up in prison are with the same organised crime groups who operate outside of prison. Debts are collected in all manner of horrific ways from families.

I am aware of instances where people have been brought into prostitution because of drug debt from a family member in prison; this kind of subversion shouldn’t be allowed to happen. The only way you can tackle it is to remove the drug trade from criminals.

Debts built up to pay for drugs during prison sentences are a major driver for re-offending quickly upon release.

Neil suggested a radical diversion from current policy to reduce offending among problematic heroin users who are “less than 0.2% of the population committing over 50% of the acquisitive crime, that’s almost all shoplifting, 50% of house burglaries.” By prescribing heroin to those in need, Neil argued that this crime would plummet.

David Skarbek, Senior Lecturer in Political Economy and King’s College London and author of The Social Order of the Underworld, addressed the issue of what it is that we actually want from our prisons to do. Is it incapacitation of criminals, deterrence, or rehabilitation? Prisons are very effective at the first, over-used to the point of diminishing returns for the second and thoroughly ineffective at the third.

David’s experience of the American prison system led to a strong caution not to head in the direction the USA has taken with larger prisons, more prisoners and the creation of more environments which help gangs and organised criminality thrive:

Let’s take young men who are disorderly, who have broken the law, who come from disadvantaged communities, and let’s cram them together in impoverished environments. 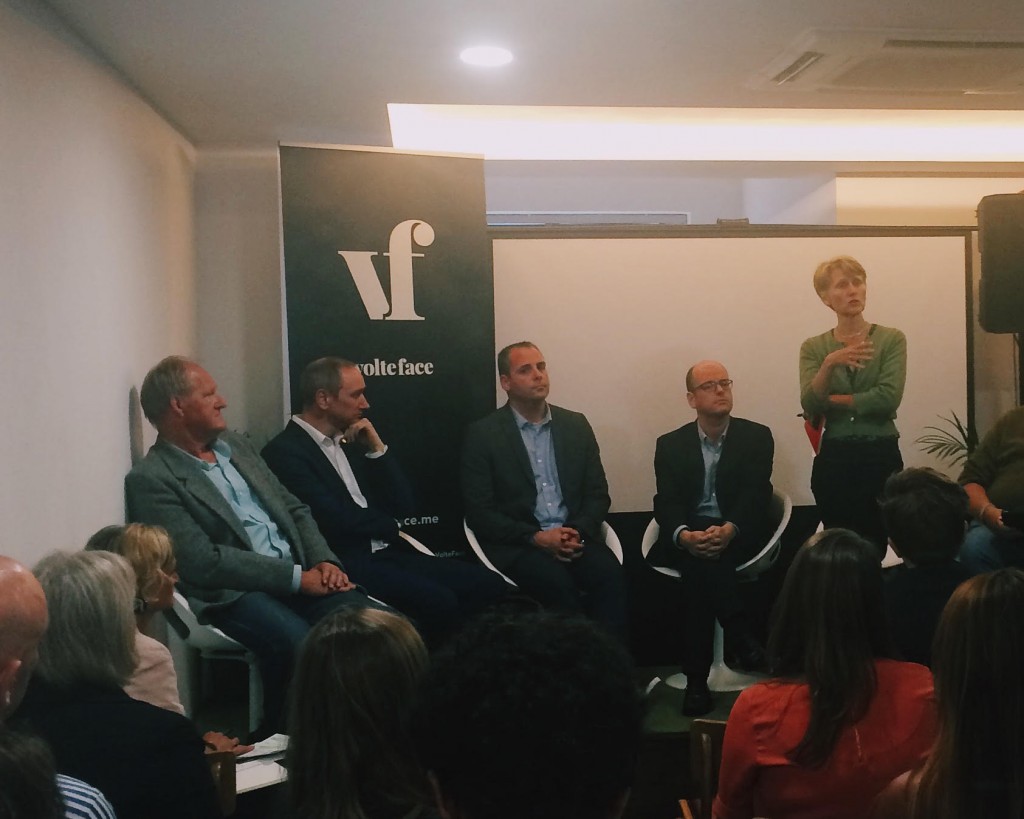 Penelope Gibbs speaks on prisons and drug reform at ‘Betwixt and Between’.

Following David’s proposals for smaller prisons, with greater engagement between staff and inmates to foster rehabilitation, Andrew Neilson, Director of Campaigns at The Howard League for Penal Reform, addressed the current void between political rhetoric and reality:

Prisons are places where the state in theory has more control than anywhere else and yet the state’s zero tolerance policy on drugs can be contrasted with the fact that nowhere are drugs more rife than in prisons. There is something really wrong there.

Andrew cautioned that we are currently attempting to punish our way out of this problem:

Over a million days, or 2890 years, of additional prison has been imposed on prisoners found to have broken prison rules over the last six years. That’s not all to do with drugs but a lot of them will be for either possession, failing mandatory drug tests or more importantly the violence and coercion that accompanies the drug trade… The system is even more stretched because prisoners are spending longer in prison. It doesn’t change prisoner behaviour. We are talking about people who are inured to punishment.

Andrew cautioned not to “confuse the rise of NPS (New Psychoactive Substances) as a cause of the rise in violence,” NPS use is a symptom of overcrowding in a system which has grown too big, the best response to which is to create busy, healthy prison routines:

People have pre-existing drug or alcohol problems, mental health problems and that person commits a crime probably because of those issues.

They then go to prison and the response at the moment is to have them lie on their bunk all day and do nothing. I think it takes a very special kind of magical thinking to think that that’s going to make them better people when they come out.

Penelope Gibbs, Director of Transform Justice and Chair of the Standing Committee for Youth Justice, sees an opportunity in drug reform to tackle the problem with prison overcrowding.

Transform Justice have recently conducted research shedding light on people’s attitudes towards crime, and interestingly “when you say ‘what is crime’ drug crime does not come out in their spontaneous view of what crime is.” Sentencing reform could be a popular measure with the public to remove drug users from our prisons.

In 2015 we had nearly 7000 people sentenced to immediate custody for drugs offences which was about 9%, still quite significant part of the prison population. Most of those are not the big business men who make huge money out of drugs.

The people in the prison are the minnows at the bottom of the chain. Of those in prison 13% sentenced for possession of class A or B then 28% there for production of class B, again is that the best way to deal with a non-violent crime? 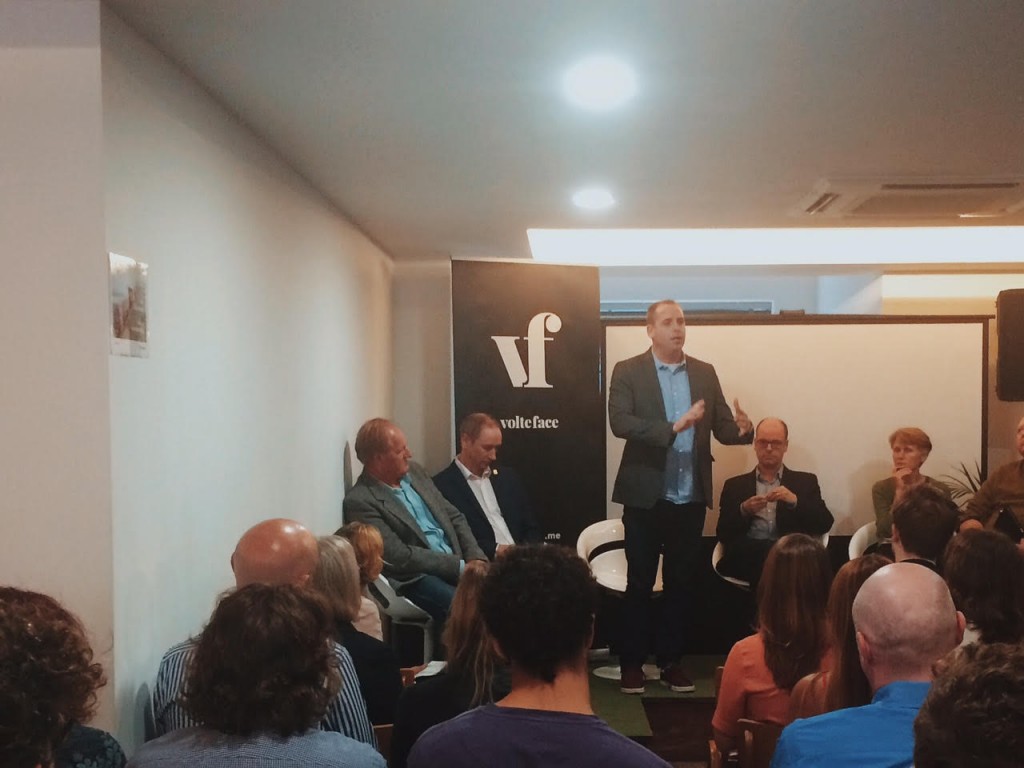 David Skarbek speaking at ‘Betwixt and Between’.

The last proposals for reform were offered by Alex Cavendish, author and social anthropologist, former prisoner and vocal campaigner for prison reform. Alex was quick to highlight the denial surrounding the source of drug supply in prisons and point out that most drugs are not smuggled in by prisoners, most drugs are coming into prisons through uniformed staff (a minority), civilian staff and authorised contractors.

Alex also pointed out that mandatory drug testing has had the unintentional consequence of driving prisoners to use harder drugs which stay in the system for a shorter period. Overall Alex concluded that:

I don’t think there will be any real progress until drug use in prison and wider society is dealt with as a medical and social challenge… adding extra days to sentences won’t work, the challenge now is what evidenced-based approach can we take to get to grips with it.

The most striking part of the proposals made by the experts was the widespread agreement despite all approaching the problem from such different angles. The major problems with our prisons are seen to be overcrowding, under-staffing and the catastrophic impacts that they have on the system as a whole.

There is no need to have so many people in prison, and, putting people in prison is evidently not a good way of reforming or rehabilitating criminals. Every expert drew attention to the need for sentencing and criminal justice system reform to alleviate our prisons from the current overcrowding. As Andrew Neilson said:

Prison population has doubled in the last 20 years because sentences have got longer. We need sentencing reform.

This is only the beginning of the debate on drugs in prisons here at VolteFace. Do follow us, and join in the debate.

Watch our debate on drugs and prison reform featuring Penelope, ‘Betwixt and Between’, kindly recorded by letmelook.tv:

It’s Time To Take Back Control

The (Absolute) State Of Drug Education In The UK