Day 4 of the Volteface UNGASS adventure started early. There is no way anyone can claim this is just a holiday when I had to be up at 6am, skip breakfast, and go to a press conference that started at 8. Admittedly that press conference was in a swanky hotel in Manhattan, and provided free pastries and coffee, so I can’t grumble too loudly.

The event was hosted by the Global Commission on Drug Policy, who, it’s fair to say, are not happy. They’ve been calling for drastic and meaningful changes to global drug policy for years, and describe themselves as being “profoundly disappointed” with the UNGASS Outcome Document. This was their chance to air those grievances to a packed room, which for once this week included a decent amount of journalists, including from the BBC, VICE News, and The Guardian. I call this the ‘Richard Branson Effect.’ 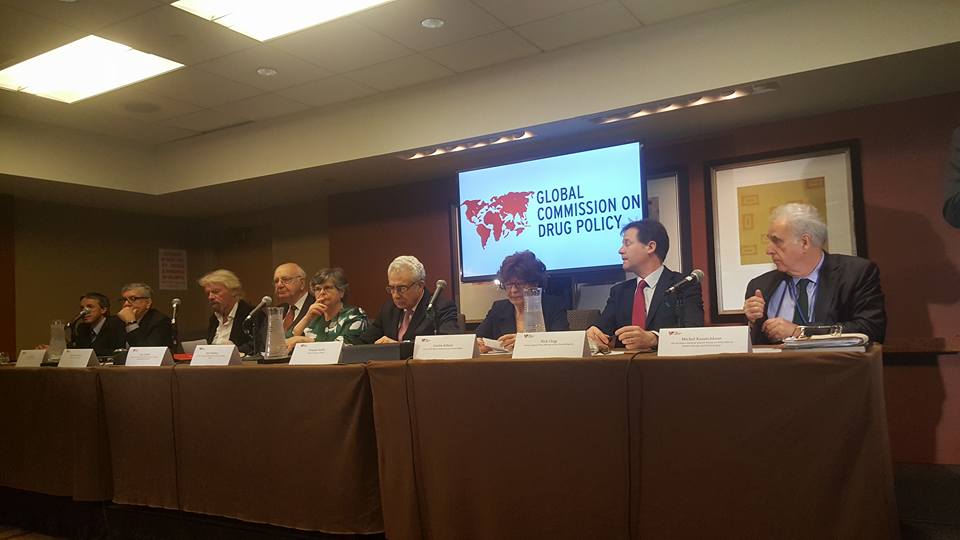 The conference was chaired by Ethan Nadelmann, Executive Director of the Drug Policy Alliance, who briefly welcomed everybody before handing over to Ruth Dreifuss. Dreifuss immediately won me, and probably any other British audience members over, by having a sly dig at Nick Clegg, who she explained was not a member of the Commission when they released their ‘red report,’ but had since joined after “changes to political life in the UK.”

The initial joviality was soon gone from the room however, as one by one the commissioners let rip at the outcome document. Dreifuss herself as circumspect, pointing out that they had not been expecting much from UNGASS. But other members of the panel were visibly riled. Branson described the declaration as “long and rhetoric, but short on substance.” “It says nothing about regulation,” he complained, and is “out of step with evidence and public opinion.”

He bemoaned the fact that the Commission on Narcotic Drugs were put in charge of preparations, meaning that two thirds of member states had no say, as they are not members of the CND. On top of that, he claimed, NGOs were denied access to proceedings. In Branson’s words, “the process was fatally flawed from the beginning.”

Even angrier than Branson was Cesar Trujillo, who could hardly contain his fury at the lack of progress made by the UN. Despite not being given the chance to speak at the outset, he stole the show with his response to a question – addressed initially to Nick Clegg, who singularly failed to answer it and was again lightly mocked by Ruth Dreifuss, who offered to answer clearly – about the fact that the UN Conventions seem to classify all drug use as abuse.

Cesar picked up the baton and lunched a scathing attack on the UN itself. Ethan Nadelmann had reminded him to use a microphone, but he needn’t have bothered, by the time he’d finished he was practically yelling. The problem, he argued, is that “the UN find it difficult to distinguish between use and abuse because their objective is ridiculous! They want a ‘drug free world’, so any use is abuse. It’s stupid.”

Many of the commissioners present, bemoaned what they saw as “a missed opportunity”, and yet, while their anger was evident, at least a few of them seemed reasonably content to repeat the entire process all over again. When asked what needed to change between now and 2019 (the next UNGASS), they were clear that a huge amount of work needs to be done, but stopped short of disavowing the UN process altogether.

Clegg stressed that “Governments need to acknowledge the scale of the failure of prohibition,” adding that governments are “aiding and abetting criminality” by allowing a system to continue where “60,000 mostly young people per year will get a criminal record in the UK, and yet the large scale gangs are hardly touched.”

Here we see a politician in his natural habitat – posing with a baby. pic.twitter.com/AUXg58hqFj

His own party, the Liberal Democrats, have recently advocated the adoption of a legal cannabis market in the UK. Given that there won’t be an election in the UK until 2020 (barring anything drastic happening), it’s still theoretically possible that should they win that election (hugely unlikely in itself, I know), the UN could have changed the drug conventions to allow them to legalise without being in conflict with those conventions.

But despite that, his party’s announcement exposes the key issue that we’re dealing with here in New York – That despite the disappointment of the outcome document and the lack of change, there has been no pushback from the UN against the attempts by countries such as Uruguay, Portugal, the USA, and the Czech Republic, to move away from punitive approaches to drug policy.

On top of that, numerous countries – most notably Canada, who yesterday vowed to push ahead with their plans to legalise cannabis, and even gave a timeframe for doing so; and Mexico, whose President spoke on the opening day of the General Assembly of the need to regulate – have expressed anger at the failure of the outcome document to address the issue of regulation.

It seems inevitable that many countries will push on with their plans regardless, and as momentum grows more and more UN member states will move away from the prohibition model. In doing this, they will be placing themselves in opposition to the UN drug conventions. Louise Arbour explained the Global Commission’s stance on this apparent problem, saying that, “By reaffirming the drug control framework the UN has confirmed the inability of member states to innovate and to find alternatives to prohibition.”

The Commission’s position, she explained, is that “Legalisation and decriminalisation should be encouraged despite this.” She conceded that this was a difficult position to put governments in, and would be very bad for the rule of law, but reaffirmed that this is what the Commission encourages.

The question I find myself asking is: At what point do the UN become an irrelevance? It’s already apparent that their drug control conventions aren’t worth the paper they’re written on – if they were, countries wouldn’t be routinely breaking them – so what is it going to take to stop this whole charade?

Plenty of frustration from Global Commission but still committed to slow change. At what point do the UN become irrelevant? #UNGASS2016

We don’t need another drawn out process leading to another UNGASS and another disappointing outcome document, we just need change. As an ever growing number of countries decide to make that change themselves on a national rather than international level, these events will inevitably come to be seen as even more of a side-show than they already clearly are.