This article was originally published by Release under the title ‘UK festivals & sniffer dogs: their regulations, your rights‘ and is republished here with their kind permission.

Festival season is fast approaching and across the UK sniffer dogs will be on the scent for festival-goers’ drugs. But just how effective are these dogs – and what does this mean for your rights?

The use of sniffer dogs, sometimes known as “passive alert detection dogs”, is a part of general police practice across the world, having seen their first use in the UK as early as 1888. Despite this, their efficacy has never been immune from being called into question.

The most extensive study so far was conducted by the Privacy Ombudsman of New South Wales in 2006. Their report, based on two years of data representing 10,000 dog searches, found that illegal drugs were discovered in only 26 percent of the searches that occurred after a dog indicated that an individual was suspicious.

Closer to home, the results are even worse: British Transport Police’s Operation Shelter conducted drugs searches using dogs at Latitude festival in 2008. Freedom of Information requests found that only 12 percent of those searched as a result of a dog indication were found to be in possession of drugs.

However, this doesn’t necessarily indicate a failure of sniffer dogs’ olfactory organs; the NSW review also found that 60 per cent of the cases where dog-led searches had produced no drugs, the person stopped had been near drugs recently.

“Recently”, though, is loosely defined — many of the “residual scent” admissions which Australian police had gleaned from suspects actually related to drug use that was days, weeks, even months old. This data, taken as it is from a police unit with a vested interest in proving the efficacy of their dogs, could even be underestimating how tenuous the dogs’ indications really were. 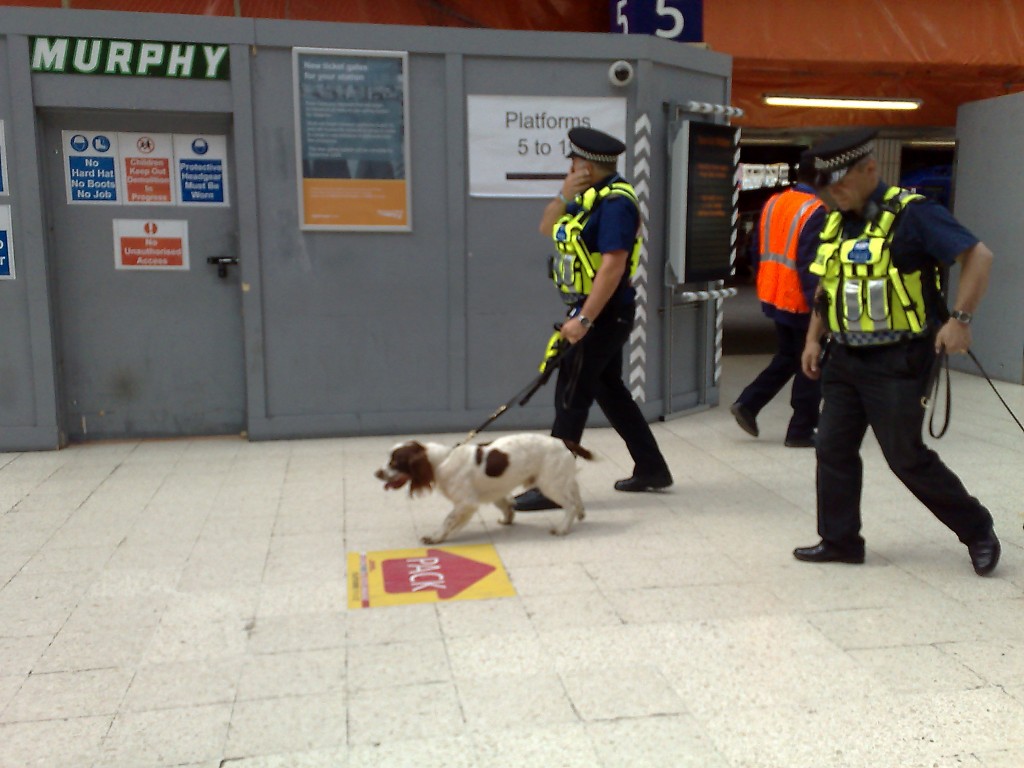 Once the dogs’ handlers are factored in, the evidence on their efficacy is even more damning. In a controlled experiment in California published in 2011 a building was set up with no “legitimate” targets like drugs or explosives. Police dogs and their handlers staged 144 walk-throughs in the building, with the dogs given the impression that real targets were in place. The study found that 85 per cent of the 144 expeditions resulted in at least one alert by the dogs despite the lack of any real targets.

Crucially, red paper markers designed to trick handlers into thinking there was a target present resulted in the rate of false alerts doubling when compared to unmarked, decoy targets containing dog treats to fool the dogs. In other words, alerts caused by handler bias far outstrip alerts caused by dogs excited by treats.

It would seem, then, that the reliability of sniffer dogs can be seriously called into question. What implications does this have for the legality of their use?

Sniffer dogs laws in the UK

Under Article 23 of the Misuse of Drugs Act 1971, the police have the power to search someone if they have “reasonable grounds” to suspect that they are in possession of illegal drugs. Association of Chief Police Officers (ACPO) guidelines point out that, in their view, an indication by a passive drugs dog does indeed constitute “reasonable suspicion”.

The point of requiring “reasonable suspicion” is to make sure we’re not searched arbitrarily*, For police to do so would be a breach of the Police and Criminal Evidence Act (PACE) 1984, which outlines the laws surrounding stop and search. Reasonable suspicion, it stipulates, has to be based on accurateinformation. Sniffer dog indications, with a 25 per cent reliability rate, can hardly be called accurate.

Our right to privacy, as enshrined in the 1998 Human Rights Act, complements and underlines this; our privacy, it states, can be breached only in cases of necessity. Arbitrary sniffer dog searches – to stress again, with a 25% reliability rate — can hardly be called necessary.

Does this mean, then, that searches based on sniffer dog indications are an unlawful breach of privacy? Given there has been significant expansion of their use in the UK, it would seem not. The truth is, however, that the use of sniffer dogs has managed simply to slip through the net. In fact, their use in the UK is not regulated by law at all.

The ACPO Police Dog Training and Care Manual is the only document resembling official guidance on sniffer dogs. Whilst it firmly states that being indicated by a drugs dog is grounds for a physical search, it also points out that the use of passive drugs dogs isn’t a search in itself, as the dogs are encouraged to sniff a general target area, rather than any particular individual. 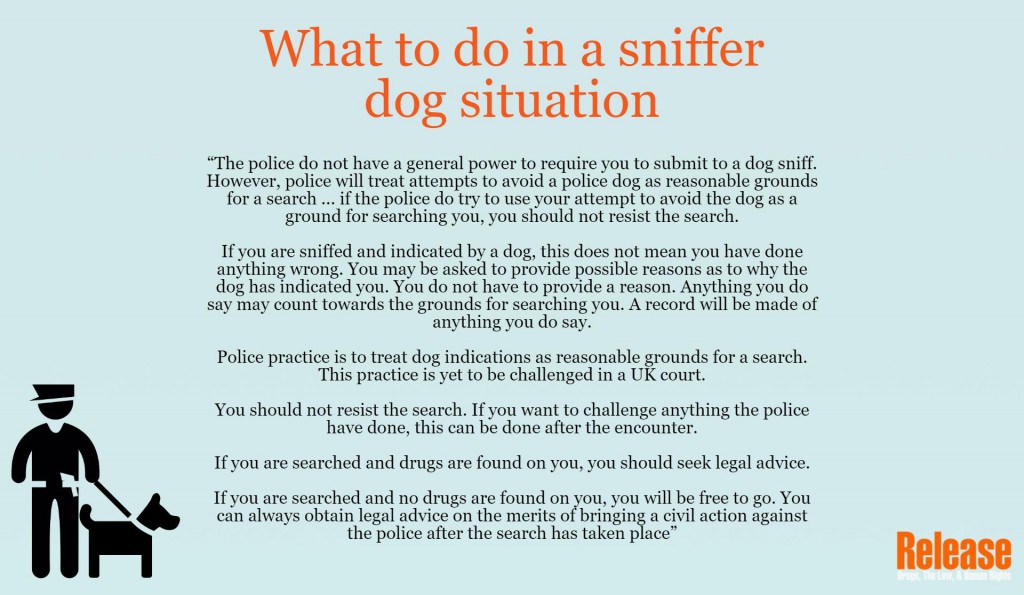 The only exception to whether a sniff is considered an illegal search, then, is if you’re “funnelled, delayed, targeted, interfered with, or requested to change direction” to allow the dog to sniff you; this is in keeping with PACE’s stipulation that the police can’t stop you and then look for grounds for a physical search.

But what if the sniff itself does constitute a search? Whilst there isn’t a formal definition of search in British law, it’s traditionally considered to be an action which would be considered assault if grounds for a search did not exist. That is, a search uses intrusion, often physical, to reveal information which would not have been revealed otherwise. What’s more, they need reasonable grounds to have taken place.

Sniffs are an example of what has been termed “new surveillance”, or the use of technology to reveal information to an extent which wouldn’t have been possible otherwise. Technology, therefore, allows the surveillance to be especially intrusive – much like a search, in fact.

Amber Marks, barrister and author of Headspace: Sniffer dogs, Spy Bees, and One Woman’s Adventures in the Surveillance Society, argues that the advantages that sniffs allow, akin to the boosts provided by surveillance technology, mean that they should indeed be considered searches. This argument, she points out, has held in other jurisdictions; in one US case, Kyllo v. United States, the judge ruled that the use of thermal imaging to reveal that the defendant was growing cannabis in his house was a “search”, and therefore required a warrant. 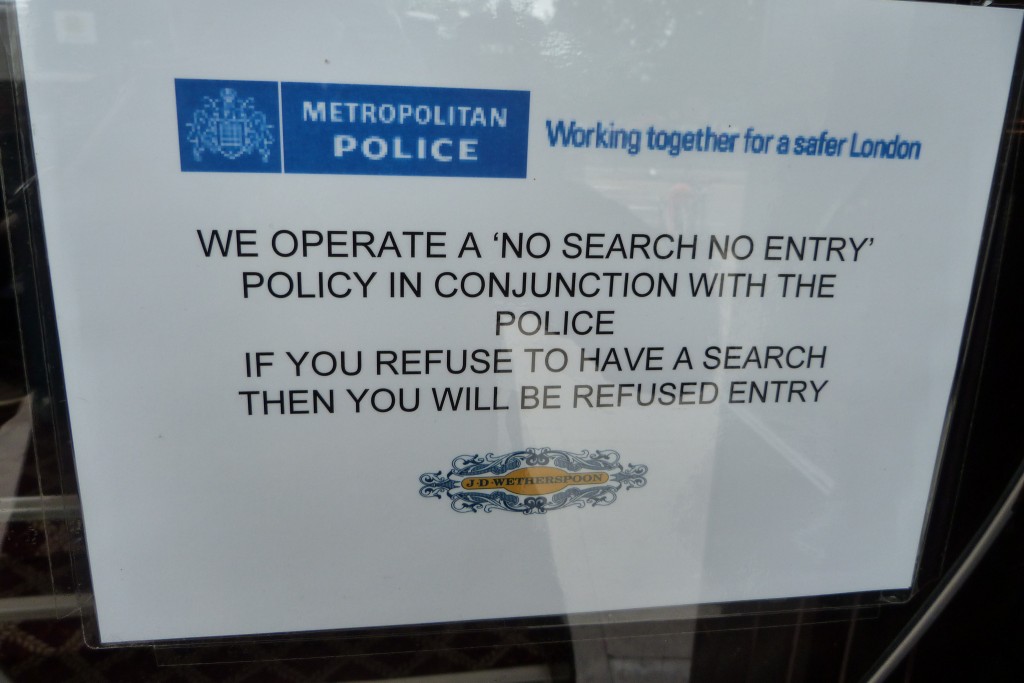 Indeed, there is precedent when it comes to sniffs themselves being considered searches. In a local court in New South Wales, a magistrate ruled in 2002 that use of sniffer dogs amounted to an “illegal search”, since it was lacking in reasonable grounds. The case is made somewhat more persuasive by the fact that the UK and Australia share a common law system.

Now, it remains for the UK to acknowledge that the use of sniffer dogs needs some form of legal regulation. The Regulation of Investigatory Powers Act, introduced in 2000, is a supposedly complete legal framework for the use of surveillance. Similarly to the cases above, it was introduced after the European Court of Human Rights ruled that the use of surveillance technology, namely phone tapping devices, lacked a basis in legislation and was therefore illegal. The Act, however, doesn’t mention dogs.

Sniffs, then, lie in a legal wasteland where their reasonableness as grounds for a search has been presumed, and where the possibility that they are a search in themselves has been ignored.

In actuality, dog sniffs are hit and miss, and so their usefulness in providing legal grounds for a search can be seriously called into question; using sniffer dogs and subsequent searches so extensively, then, amounts to performing almost-blanket searches on whoever happens to be nearby. Is this a proportionate, fair response to the “threat” of a joint, for example? Or is it an unreasonable intrusion on privacy?

The future of sniffer dogs and the festivals exemption

The conclusions drawn in the New South Wales review were damning: “The use of drug detection dogs has proven to be an ineffective tool for detecting drug dealers …we question whether the Drug Dogs Act will ever provide a fair, efficacious and cost-effective tool to target drug supply”. Indeed, the review recommended abolishing the act altogether.

Ten years later, the British Transport Police have voiced their own doubts. A 2016 investigation into the BTP’s use of Stop and Search powers found that the force, in light of the fact that most of their drug searches following dog indications turned up nothing, had reduced their use of drugs dogs “substantially”. The BTP were the police force mainly responsible for the huge number of untargeted, intrusive sniffer dog operations at train and underground stations. This scale back, then, whilst currently limited to the South-east, is still enormous and a significant victory. 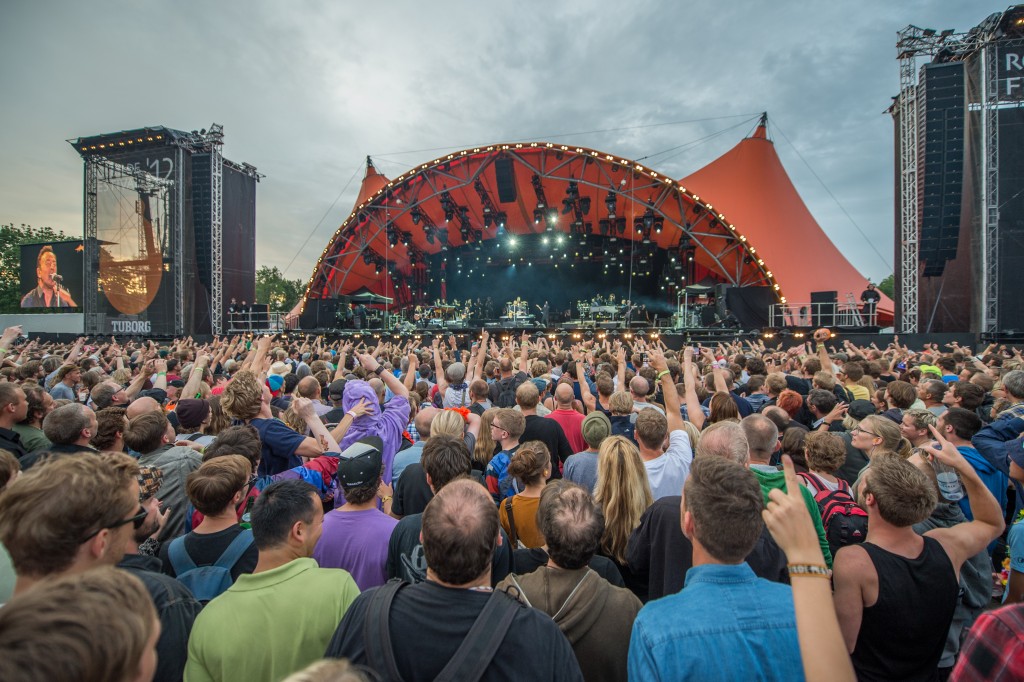 Festivals, unfortunately, represent one of the few caveats to the above. At festivals, as at sports events, concerts, and organised parties, the police do not require reasonable suspicion to search you. The reason why not is found in the small print of the ticket: “Entry”, it tends to say, “is under the condition of being searched”.

For people who do go into festivals, including people who are carrying no drugs at all, dog indications can, and have, been the catalyst for some appalling experiences. One report sent to Release by a UK festival-goer describes how they were subjected to a strip search by police. Finding nothing, the police asked the person, who’d been indicated by the drugs dogs, whether she’d been sitting next to someone with a residual scent earlier in the day. She didn’t know.

The feelings of humiliation and injustice engendered by encounters like this can seriously affect trust in the police, and in the rule of law. Indeed, the “potential for [dog searches] to affect public trust adversely” was the key reason for the BTP withdrawing from their use. 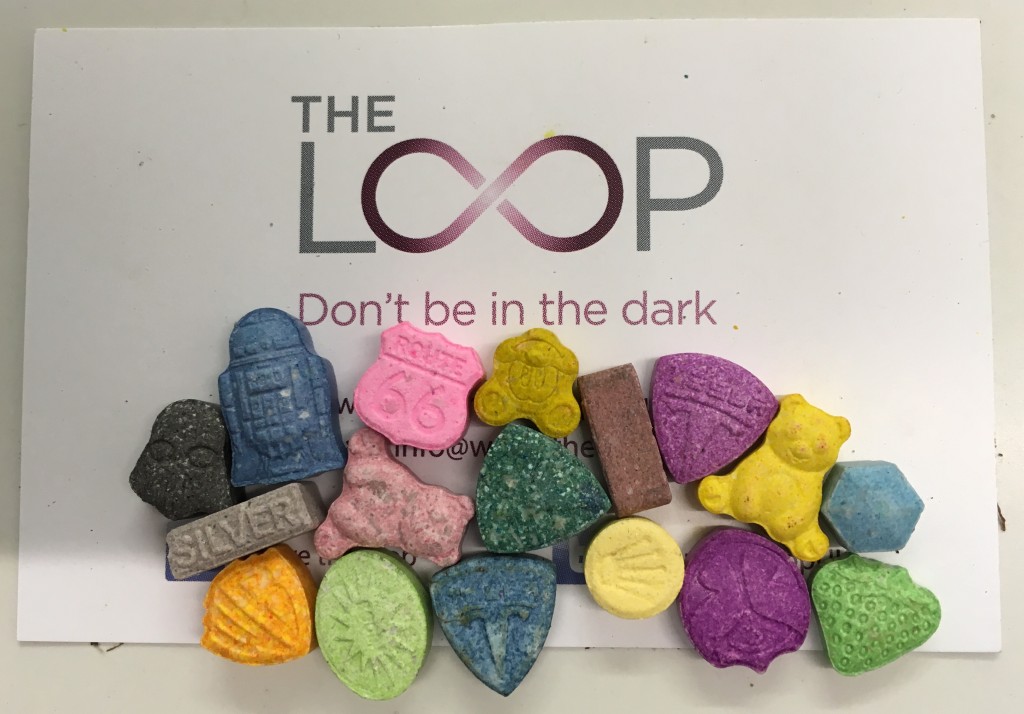 Drugs dogs have other side-effects too: fear of the dogs by those who are carrying drugs can lead to panicked responses, with festival-goers swallowing their entire stash to avoid getting caught. Replacing the dogs with amnesty bins, welfare tents, and, as promoted by forensic testing organisation The Loop, on-site drug testing, could instead create an environment in which festival-goers can feel safe, and lead to some happy results in terms of harm reduction.

*The notable exception to this is in Section 60 of the Public Order Act 1994; if police believe that serious violence is about to occur in their locality, they can stop and search any individual or vehicle in the area within a 24-hour period, without needing reasoning suspicion. There are a handful of other powers that allow police to search an individual without reasonable suspicion, such as Schedule 7 of the Terrorism Act 2001, which permits searches without grounds at borders.

Priya Thethi is an intern at Release, the national centre of expertise on drugs and drugs law. Tweets @PriyaThethi

Cannabis, the downside of the criminal policy reform {in France}

In Their Own Words: The Story of the UK’s Cannabis Clubs