The 2nd National Substance Misuse Conference took place in Birmingham on Wednesday 13th September. The conference looked to bring together the UK’s leading clinicians, researchers, educators and more to consider how the sector meets current and future challenges.

The Conference opened with Police and Crime Commissioner David Jamieson outlining the problems caused by substance misuse and cost to society both economically and socially. His Policy Officer Ben Twomey spoke eloquently on the need for principled drug policy and announced they would be hosting a summit in December, in which issues raised would be discussed.

In the morning session, it was Paul’s Hayes’ talk which was first to raise eyebrows, as in his passionate and frank style, he laid bare the reality of why treatment services have been historically so well-funded; moral panics and fear. Paul called for a new narrative to emerge, and said that treatment’s biggest enemy is complacency. It is hard to deny Paul’s logic and analysis, he knows all too well the reality of the cuts facing treatment services as the heroin cohort diminishes. As with any recent conference on substance misuse, funding and stigma remain a key issue. Paul’s call for a new narrative is sensible, although how such a task is achieved is another matter. My recent piece for Volteface (LINK) on the opiate crisis in America highlights the power of rhetoric, and raises a similar call to action. 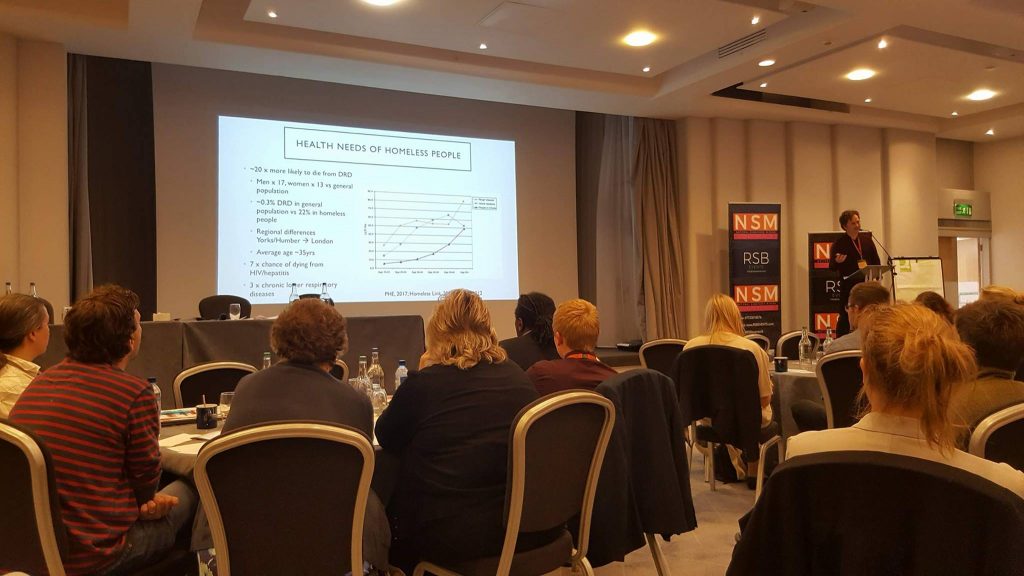 The first workshop I attended was that of KFX Director Kevin Fiemen who looked at 5 things to watch after the NPS bill. Kevin is not only immensely knowledgeable on drug use and trends, he also delivers the information in an engaging way with an abundance of humour and warmth. His workshop reminded me that drug conferences don’t always have to ask the tough questions and talk about money, sometimes it’s great to take the opportunity to learn something new and brush up on knowledge.

The eyebrow raising award for the afternoon slot goes to Pete Burkinshaw, Alcohol, Drug Treatment and Recovery Lead at PHE, who examined the strengths of the latest Government drug strategy. There has been a great deal of criticism regarding the strategy from a wide range of stakeholders, (including a piece from our very own Henry Fisher here) which Pete acknowledged from the start, although he wanted the discussion to focus on what is in it, rather than what isn’t. Defending policy can be a tough gig, especially when there is such a varied degree of opinion on the subject and massive challenges facing the sector.

Pete did provide context and showed improvements from the previous strategy which are hard to deny. The problem however remains that treatment services budgets are being drastically cut during a time by which opiate deaths are at an all-time high. While ‘doing more for less’ might excite policy makers, key workers with 70 complex clients on their caseload may feel a little different. Still PHE can only work with what is given by the Government and with the ring fences down, everyone is eyeing the same pot.

The potential for debate on the strategy arose during the Q&A with both Professor Harry Sumnall and Pete Burkinshaw sitting on the panel, but despite questions from the audience, no-one quite took the bait. It would have been an excellent exchange, both speakers highly articulate on the drug strategy and perhaps holding quite contrasting views.

The afternoon workshops saw Volteface’s own Lizzie McCulloch examine if now is the time for drug consumption rooms. With the issue gaining increased traction due to increasing opiate deaths across the UK, the workshop was highly attended. Lizzie provided a quick overview of the political landscape in Government and with treatment services before engaging attendees to think of solutions to the barriers of implementation. Attendee’s told us that the workshop was extremely thought provoking, and Lizzie did a great job of harnessing the knowledge from such a diverse and experienced audience. Her report due out later in the year is certainly one to keep an eye out for.

The Conference was thought provoking and engaging. You can add the team at Volteface to the list of those who want to see it back again in 2018. It will be interesting to see if suggested solutions and areas of opportunities in a funding deprived sector will have been embraced by the time it comes around.

Paul North is an Addiction and Treatment Advisor at Volteface. Tweets @Paul_North

This Is All Very Entertaining, But Can We Have Some Facts Please?