Not All Deaths Are Equal

An edited version of this article was originally published on The Conversation under the title ‘Drugs fatalities overtake car fatalities for the first time’. Mark and Ian have given us a bit more detail.

Seven years ago, fatalities from opiates overtook fatalities due to road accidents in the US. Sadly, the same phenomenon is now playing out in England. The latest figures from the Office for National Statistics (ONS), show that last year, 1,732 people died in traffic accidents in the UK compared with 1,989 who died due to opiates in England alone.

New psychoactive substances, referred to as “legal highs”, have received significant media attention, and deaths due to these drugs have risen by 40%, but opiate deaths now outnumber legal-high deaths by 19 to 1, despite a steady decline in opiate use in England and Wales over the last decade.

Of course, opiates are not the only problem – deaths due to cocaine have reached the highest on record at 320, increasing by nearly 30% since last year – but opiates are what we should really be focusing on. 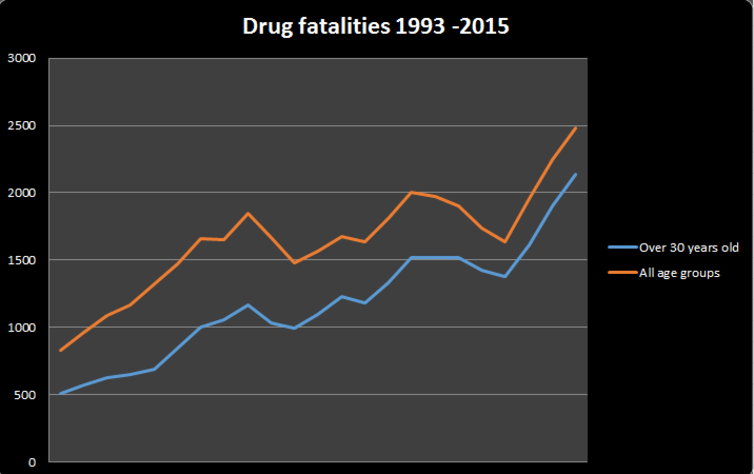 Drug-related deaths of males outnumber those of females by three to one. But females deaths are rising, from 254 in 1993 to 636 last year. This raises the question of female friendly and engaging are treatment services ? As a recent editorial in the journal of addiction acknowledges http://onlinelibrary.wiley.com/doi/10.1111/add.13269/pdf gender and sex are a collective blind spot.

So why the rise?

60% of deaths occur in 30- to 49-year-olds – compared with an average life expectancy for the rest of the population of 80. For some the response is a shrug of the shoulders, inferring it was a self-inflicted and inevitable.

Health complications resulting from drug use do not entirely explain this inequality in life span. A range of factors are likely to be involved. Purity and quality of heroin are not as critical, borne out by decades of research. Rather it is the risk of accidental overdose by more experienced and tolerant heroin users. Equally, combining heroin with alcohol and or a benzodiazapine such as diazepam increases the risk of death. In 1993, one in four deaths were attributed to combining alcohol with opiates; this has now reached one in two.

In 2010, the newly elected Conservative government introduced a new treatment strategy. The policy emphasised the importance of achieving abstinence from drugs rather than merely reducing the harm they can cause. This recovery agenda may have inadvertently contributed to the rise in drug deaths. Unfortunately, even if abstinence is achieved, the odds of relapsing are high. Abstinence reduces the ability to tolerate previously manageable doses of heroin, resulting in an overdose for some.

Treatment does reduce mortality. A recent report showed that most opiate deaths were of people not in treatment. Treatment usually involves providing a substitute drug with the aim of weaning the individual off heroin. Methadone and buprenorphine are commonly used to do this. But there are two critical factors, retaining people in treatment and what happens when treatment finishes. The month following treatment is particularly important as a person’s tolerance to opiates will have reduced, increasing the risk of overdose if the person relapses. Following up people at this critical stage could help reduce the risk of fatality.

But the challenge is how to engage those who are not in treatment. Attracting this group requires a more radical approach. Drug consumption rooms provide a safe place for people to use their drugs, providing clean syringes for those who inject heroin. These facilities have an impressive record of reducing fatalities due to drug use. And, just as important, they are the first step towards engaging a marginalised group into health and social care. We don’t need any more evidence as to their value – we need what politicians crave: public support.

Naloxone can also temporarily reverse the effects of an opiate overdose. Making this drug available to opiate users and their families offers the potential to reduce fatalities. Scotland has pioneered this by implementing a national naloxone policy and new regulations in England have allowed this approach to be mirrored. This development gives workers and heroin users access and permission to administer naloxone when an overdose occurs. 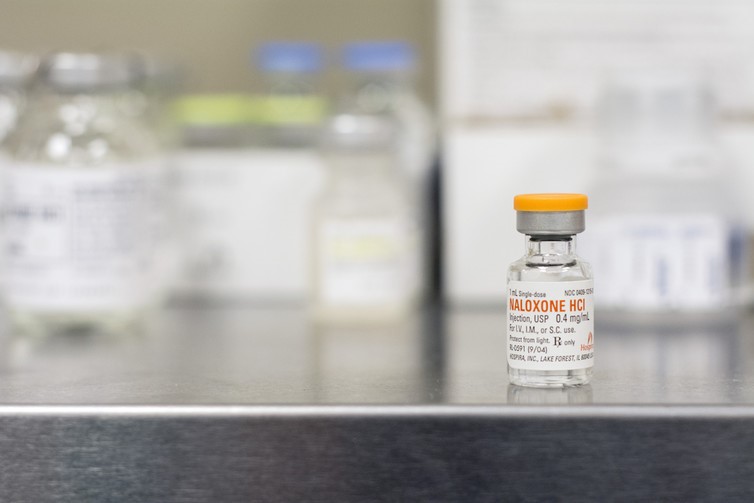 Naloxone can reverse the effects of an opiate overdose (Source: PureRadiancePhoto/Shutterstock.com)

A glimpse into the future?

The US has witnessed a 200% rise in prescription-opiate deaths since the millennium, driven by increasing availability and lower costs. The regulatory and marketing environments differ in the US and the UK. In the UK, open marketing of opiates is prohibited and there are stricter controls and monitoring of prescribing. But current drug control measures are outdated and easily circumvented by the internet.

So we need to carefully monitor the use and misuse of a range of prescription drugs such as tramadol. Tramadol is an analgesic used for moderate to severe pain. Prescriptions for tramadol rose dramatically over the last decade, as did deaths thought to be the result of misusing the drug. This prompted new regulations which came into force last year with the aim of curbing tramadol-related deaths. This year’s ONS data shows that one year after the introduction of these regulations deaths have reduced, but we will need to see if this trend continues. 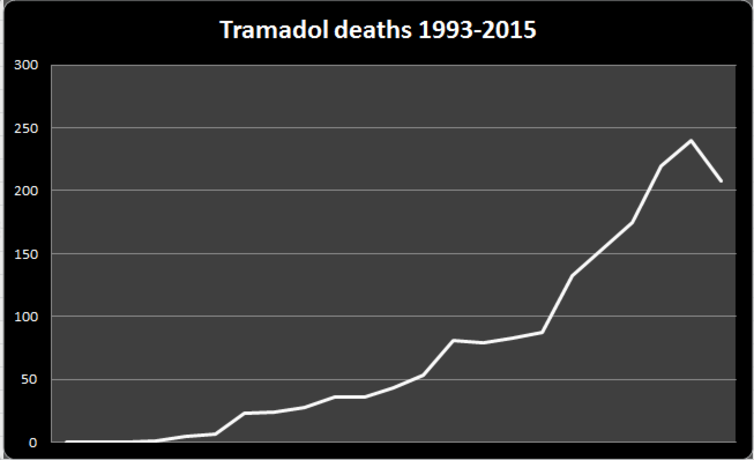 Public Health England has responded to the trend in drug fatalities, publishing several recommendations. There are some welcome suggestions, including the closer monitoring and integration of substance use treatment with other services. The aim is to ensure that clients in drug treatment have their physical health checked and timely specialist interventions are offered. This could go some way to improving the health of an ageing treatment population, who are relatively young by todays standards, but inhabiting older bodies.

Time to review and invest

There is little to disagree with in the report, but it could have been bolder. The continuing rise in drug related deaths permits a more fundamental response. Treatment services on the whole are where mental health services were twenty years ago. Clinic based and waiting for clients to come to them. This passive approach won’t engage a group of people who often don’t care about their health or are willing to walk into a treatment setting. Mental health services adopted a much more assertive approach to their ‘hard to reach’ clients, recognising that a more flexible approach was needed. This required investment but produced positive results http://onlinelibrary.wiley.com/doi/10.1111/jpm.12239/full. Could the same be achieved in drug treatment ? We must not compound the inequality already experienced by problem drug users with further health treatment inequality.

A clear measure of the UK government’s ambition to reduce inequality is halting the rise in drug overdoses. Avoidable fatalities due to drugs serve as a barometer of how equal our society is and how we respond to individual vulnerability. We all lose out when an individual dies this way.

Ian Hamilton is a lecturer in mental health in the Department of Health Sciences at the University of York, with an interest in the relationship between substance use and mental health (Dual Diagnosis). Tweets@Ian_Hamilton_

Mark Monaghan is a Lecturer in Criminology and Social Policy at Loughborough University. He works mainly in the area of social policy and criminology, with particular reference to the area of drugs policy. Tweets@mpmon

What do Justin Trudeau and Snoop Dogg have in common? (aka The Nardwuarticle)