Last week, VolteFace reported on the case of Sophia Gibson, a five year old girl with Dravet syndrome from Northern Ireland whose mother, Danielle, is trying to get her accepted onto a clinical trial to test the effects of cannabidiol on seizures. We asked Danielle to share her parental perspective.

Sophia had her first seizure at 5 months old.

The Doctors put it down to her having a high temperature, but on New Year’s Eve of 2011, Sophia had her first status seizure (a seizure lasting longer than 30 minutes). After having an MRI, lumber puncture and an EEG we were told that they couldn’t find anything wrong, but then after a blood test Sophia was diagnosed with Dravet syndrome – a rare, catastrophic, form of epilepsy.

Dravet syndrome affects almost everything about Sophia’s day-to-day life: her development, balance, walking, and sleeping. She suffers from many different types of seizure, such as tonic clonic (characterised by multiple phases of spams), myoclonic (brief jerking spasms), absent and partial complex (short periods of blanking out), non convulsive and is prone to status epileptics (a dangerous series of seizures without a guaranteed return to consciousness) which could potentially end up killing her.

Sophia tested positive for the mutation in her SCN1A gene, which helped to confirm the diagnosis of Dravet syndrome.

In terms of medicine – every day Sophia takes Epilim X3, Clobazam X2, and Stiripentol X2. She takes Azithromycin on a Monday, Wednesday and Friday to help fight against bacterial infections, and Sophia also takes melatonin to help her sleep (which, unfortunately, isn’t working). In addition to all this, the most important one that we have to carry everywhere is Buccal Midazalam, which we give Sophia to try and stop her seizures.

We can’t go any more than 30 minutes away from the nearest paediatric led hospital, because if Sophia has a seizure and gets rushed to hospital they have the drugs that can try and stop it without risk of the seizure killing her or Sophia incurring brain damage. 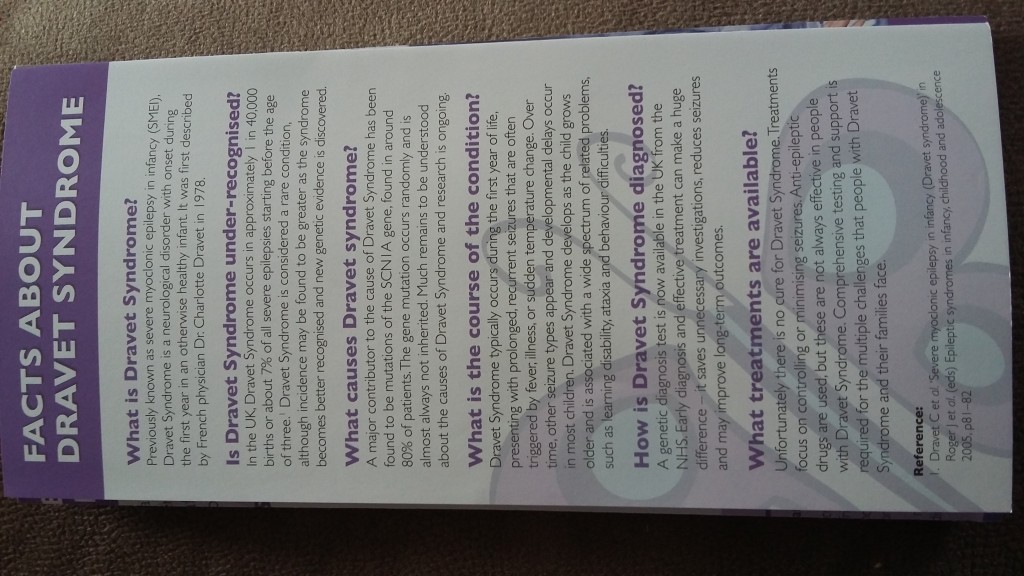 Sophia’s neurologist has referred us to a professor at Great Ormond Street hospital in November to see if Sophia can get cannabis oil on trial.

We constantly have to follow her about just incase she has a seizure, so Sophia’s quality of life is certainly impacted a great deal. Sophia attends Clifton special needs school in Bangor as Dravet syndrome has seriously affected her development.

The amount of times Sophia has been so seriously ill and we have been told she may need to be transferred to the Royal ICU. There have also been a few occasions during the night where we have found her blue around the mouth as she has had a non convulsive seizure.

Sophia is such a pleasant child with such a love for music and I wouldn’t change her for the world, it is just the seizures that have such a big impact on her life.

The cannabis oil has all the psychoactive compounds taken out. It has had great results for many different conditions and is available in several European countries and in some American states.

Sophia’s brother has been tested and luckily he doesn’t have the SCN1A genetic mutation. Neither do myself or my partner Darren – so Sophia’s genes are a new, difficult, mutation in the family.