A cafe space in Leicester was transformed into a forum for political action, as those who attended hoped this meeting would be a step along the path to significant legislative changes in the UK. It is the first event of its kind in the UK, and, significantly, it was left unhindered by police or any other authorities – this in itself a sign of progress.

While some socialised and networked in the sweet-smelling smoking area outside, inside, an attentive audience listened to the latest news and advice from an impressive panel. As BBC Bristol’s cameras rolled, speakers presented on a range of topics; from broad political philosophy to a detailed breakdown of legal advice for the social clubs. 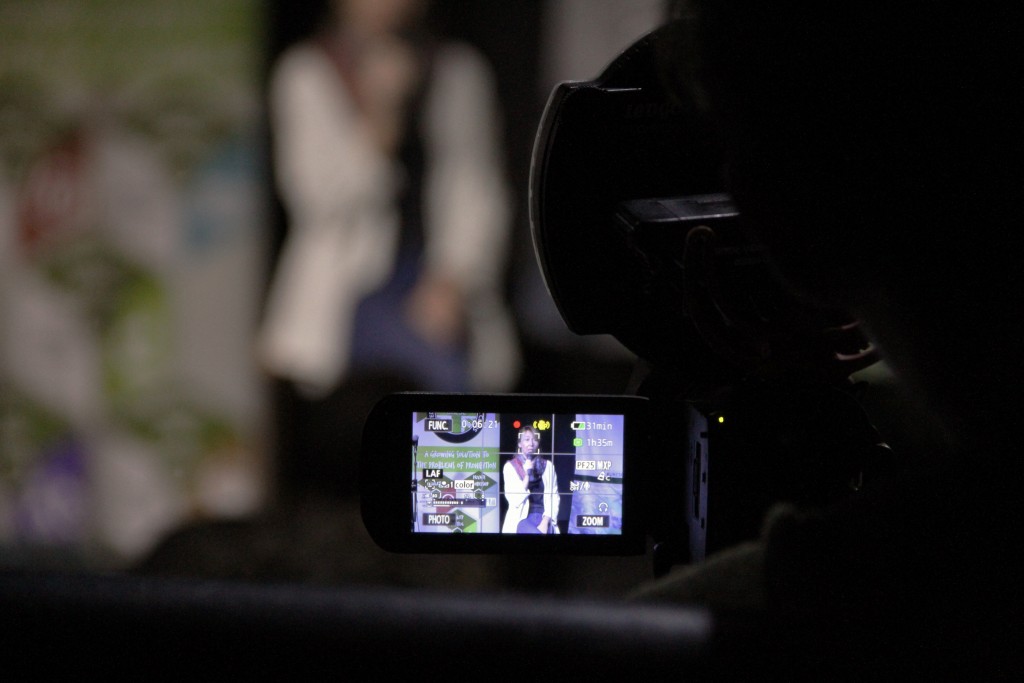 Niamh Eastwood, Executive Director of Release, was one of those who took to the stage. Release is an NGO which helps those in trouble with the police on drugs or sex work related charges, as well as general public and corporate education around these issues.

Eastwood explained the current UK law practice situation in regards to cannabis related crimes. She explained how it is unfair that the manner in which an individual is dealt with for cannabis related crimes differed wildly from area to area. “It’s a postcode lottery” she told the audience. “Even within the same area, sentencing for one crime is unfairly different from one judge to another when it comes to cannabis”.

Parallels were drawn with how the legality varied so greatly in the US from state to state and judge to judge; and a member of audience spoke of how he and his friend had had different fates for breaking the law in almost exactly the same way. Eastwood also answered questions and gave detailed legal advice to members of the audience who themselves grew or processed cannabis, whether for personal use or as part of a club. 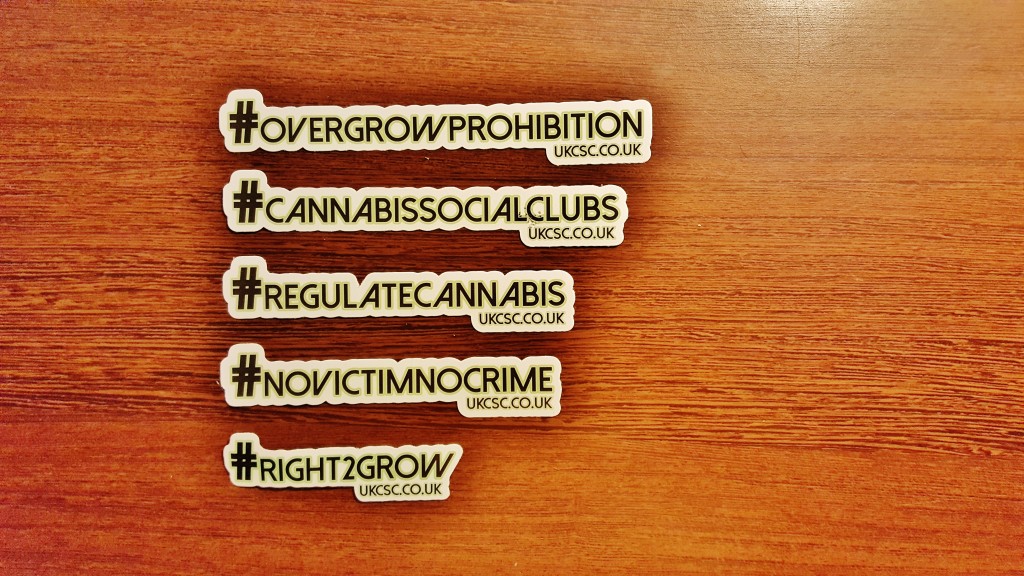 Slogan stickers contained in the goody bags on offer at the event.

Everyone present learned a great deal about what was going on in the UK – and how best to act moving from here. One of those who was busy observing and taking notes was Dr Melissa Bone. She is an academic who specialises in Human Rights and Law, and is researching the UKCSC movement in an academic capacity. “I’m impressed with how far the UK social clubs have come in such a short space of time. Five years ago they just didn’t exist in the UK, and now they are looking to deploy official frameworks, such as the 9 plant collective model” she tells me.

Bone was impressed with how the clubs attempted to integrate into society and normalise their work as opposed to simply trying to be rebellious. “For example Teesside Cannabis Club are working with their local Police, the media, and other bodies. You do definitely need to be provocative and protest, but at the same time trying to work with different bodies in society is the way to get things done and get things moving.” 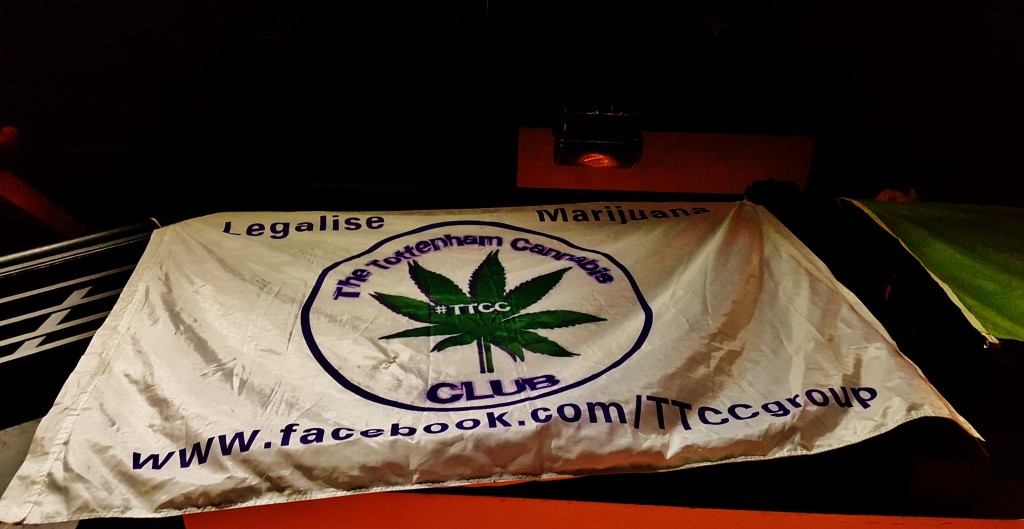 A flag on display at the UKCSC Annual General Meeting.

The organiser behind the event (and UKCSC Chairman), Greg De Hoedt, was up next. He proposed his new idea as he opened a box full of plastic tags. “We are launching our Tagged Plant Collective Model for 9 Plant Collectives”, De Hoedt announced. After he and his team researched and sought advice from organisations such as the European Coalition of Fair and Effective Drug Policies, they concluded that growing 9 cannabis plants was the best way to protest, and this number was not considered a commercial scale operation – i.e. not an organised crime drug dealing operation. “We are only offering these tags for gardens which are not for profit or dealing. But if you are tagged and face a confrontation with police, we have secured a legal team to help you get the lowest sentence possible. We are trying to directly challenge as a union.”

[READ] In Their Own Words: The Story of the UK’s Cannabis Social Clubs

The last of the speakers was one which many were looking forward to hearing from. Marc Emery had flown all the way from Canada to attend. He is often dubbed the ‘Prince of Pot’, and is a renowned cannabis activist around the world. He spoke extensively about his life experiences, and told the audience how his current venture could be shut down by police at any moment.

The venture is a club house in Vancouver which contains a shop, lounge, and media centre, as well as operating as a cannabis dispensary; illegally. Maybe something that the UKCSC would aim to eventually have here in the UK. “I’m here because I want to spread the wealth, spread the knowledge, and support this initiative” he told me. His talk captivated the audience who were impressed by his consistent brave activism and achievements in Canada. “The problem we have here is there isn’t enough open challenging of the law. In Canada there are thousands of us that have been arrested, and we hold that as a badge of honour. It’s not quite got to that in the UK yet.”

“Nowadays you have put the police in a conundrum. If you do something they don’t like you are challenging them – because they don’t want to arrest you and arouse the public and media in a negative way; but if they don’t arrest you, you also win.” He feels that although the UK has begun to go in the right direction, there are too many people who make excuses or hide behind a computer screen when it comes to protesting the law actively. “History isn’t made by people who make excuses. History is made by people who go and do it, get their ass kicked, and keep on doing it, until the they aren’t getting their ass kicked anymore. It was the same for contraception, abortion, and every other freedom issue.” 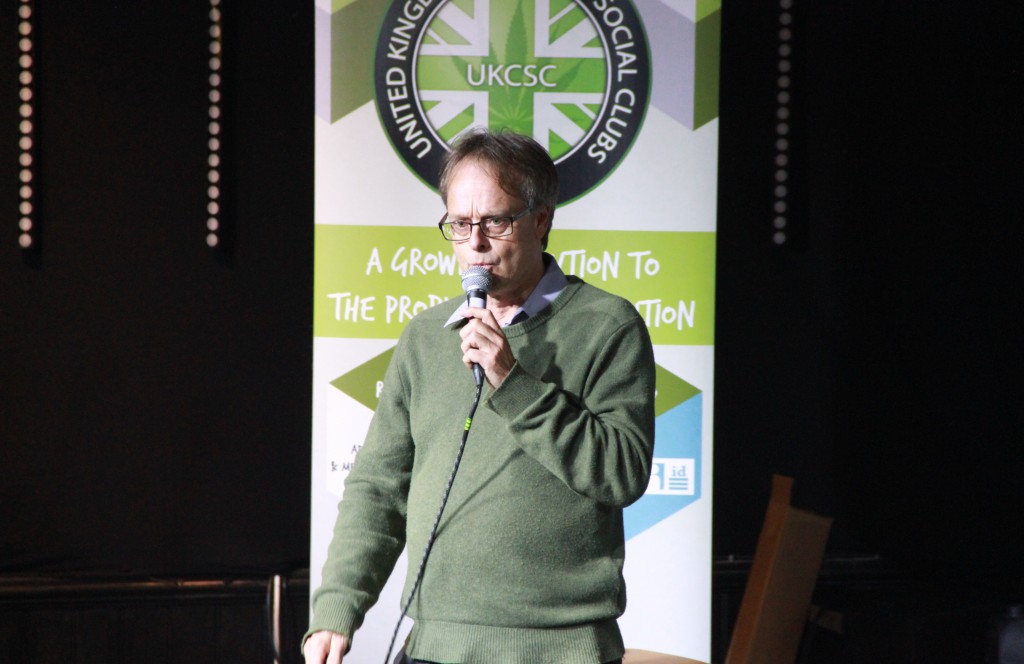 This AGM comes as five states in the US vote on full legalisation in their communities, and four more vote for legal access to medicinal cannabis. While the US is way ahead of the UK in its achievements to legalise the plant nationally, the UK is not far behind if events and initiatives such as this become a more regular occurrence. “I hope we will see more of this in the future. I’ve learned so much coming here today” Dr Alex Klein, a social anthropologist said to me as the event was wrapping up.

There have been social clubs as early as 2010 in the UK, but now, the hope is to equip and encourage the clubs to become a more standardised, unified, and significant political force nationwide. This AGM represents the first time the cannabis community have gathered in such a way, with the specific and clear goal of becoming a political force that the police, politicians, and public must listen to.

All photos provided by the author.

Ali Cedar is a freelance journalist who has previously been published by Vice. Instagram: @CedarLibani

In The Loop: Harm Reduction and Drug Testing Take Centre Stage on the Airwaves

They Shoot Children Don’t They?