Over the weekend the media was buzzing with reactions to a new study on high-potency cannabis (known as skunk).The latest in a series of studies from King’s College London appeared in the media last Friday and brought about a range of responses. The report can be read in full here. The report was the combined work of King’s College London and the Sapienza University of Rome.

The study, published in the peer-reviewed Psychological Medicine journal, concluded:

The Daily Mail article reported on the study in the following way. 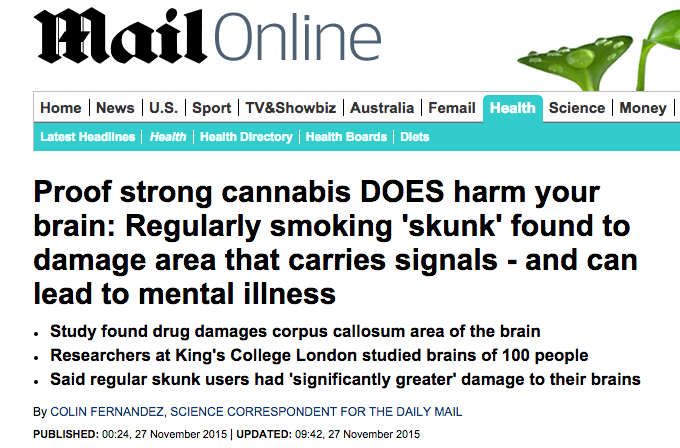 The Sun also responded in a similar fashion, as seen below. 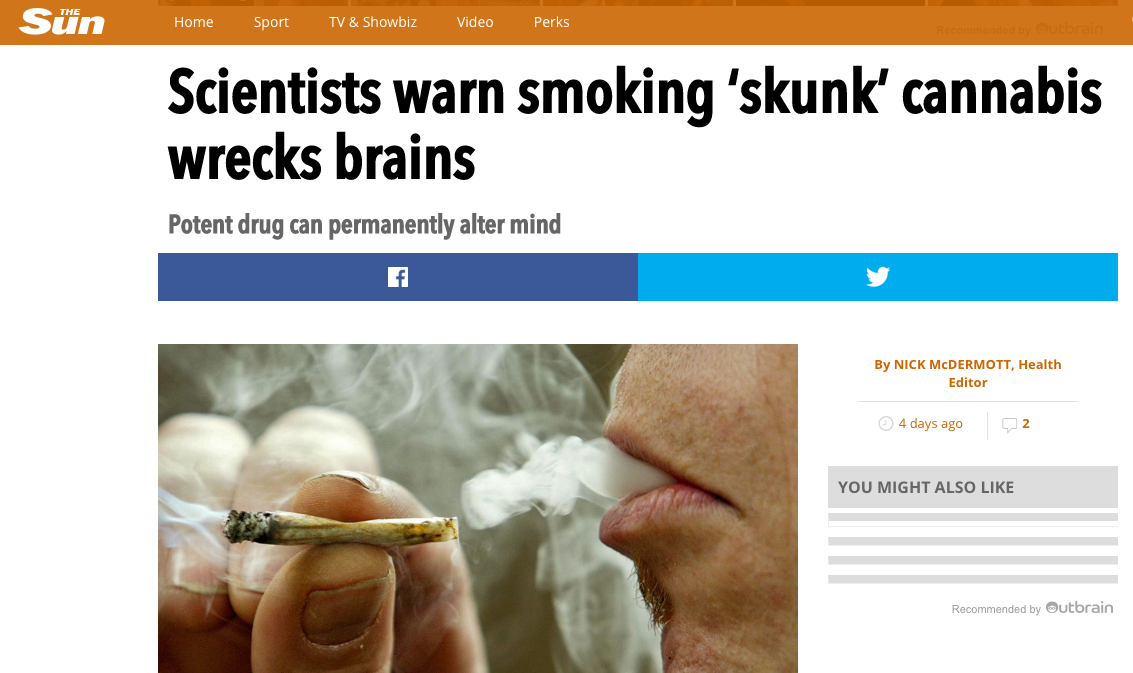 Hearteningly the NHS responded in a more nuanced fashion, walking readers through the study, its methodology and its findings.

The analysis by Bazian and edited by NHS Choices can be read in full on the NHS website.

In their overview they analysed how the media reacted to the study’s findings – suggesting most outlets portrayed the findings how they are while others may have ‘overstepped the mark’.

Generally, the UK media covered the story accurately, but some of the headline writers overstepped the mark. The Sun’s headline, “Scientists warn smoking ‘skunk’ cannabis wrecks brains”, and the Daily Mail’s, “Proof strong cannabis does harm your brain”, were not based on any evidence.

They broke down the claim that there as ‘proof’ for the above claim – outlining that the study only suggests ‘a possible link’.

This type of study cannot prove cause and effect, only suggest a possible link, so “proof” is too strong a term. Also, the study didn’t look at how the small changes in the brain associated with skunk affected thoughts or other brain functioning, so it was not fair to say skunk “wrecks” the brain.

The Guardian’s Rhiannon Lucy Cosslett also released a thoughtful response entitled ‘Until cannabis is legalised, users will risk brain damage’, which acknowledges some of the dangers of consuming cannabis. Her focus is on the legalisation of cannabis so that those who smoke it can have more control over the potency of what their consuming.

“When it came to my mental health, no drug has given me more concern than weed,” a friend who has tried pretty much everything once told me.

Cosslett makes a very important point when she draws attention to the ‘polarised nature’ of the debate.

So often the polarised nature of this debate means that any suggestion that cannabis can be bad for you is met with kneejerk dismissal. Admitting that it can be is an important step towards adding nuance to a discussion that affects the health and wellbeing of those involved. Alcohol and tobacco are worse, yes, but neither is marijuana a miracle drug.

It is refreshing to see such honest and open discussion balancing out the often biased or sensational reports surrounding the cannabis debate.

In the days to come we will be exploring this piece further. If you would like to contribute to our coverage or join the debate do get in touch.

You can email us at info@volteface.me or tweet us @VolteFaceMag

A Pro-cannabis Mayor of London in 2016