Investigation: Student drug culture in the age of COVID-19

Freshers has been anything but a normal for those starting university this year. When Libby*, a first-year student rolled up to her halls, she didn’t expect to be locked in with people she hardly knew. What a sizeable proportion of the new cohort did expect, however, was to experiment with drugs.

Away from home often for the first time, students are exposed to casual recreational drug taking at university. And, although research remains limited, many choose to engage. According to a survey published by NUS in 2018, 39% of student respondents said they had used drugs; 23% partaking occasionally and 10% regularly.

This year wouldn’t be any different. Except, it completely would. The intersection of the pandemic and freshers has completely transformed a heavily stereotyped experience. With clubs, pubs and bars closed, and students deprived of the opportunity to miss a lecture by choice, the university experience has been quite different from what was perhaps envisioned.

But, what of student drug culture? Before term began, SSPD (Students for Sensible Drug Policy) President, Eleri Crossland, predicted a shift in an article for Volteface. For some, less party drugs; more cannabis. For others, a greater sense of security brought about by a reduced chance of getting caught. So, has boredom, anxiety and the chase for excitement amidst the mundane led students to turn to drugs in greater numbers? Or, has confinement dampened appetites?

‘Not at all’ according to one student. ‘If anything, it’s happening more. We’re all locked in together trying to make the best of a bad situation’. As another told me, ‘its pretty regular, because there’s little else to do’.

As expected, the appeal remains. But the student-as-reckless-party-animal stereotype isn’t exactly accurately. ‘Before I went to uni, I imagined it to be this really crazy place, where everyone was getting fucked up. I haven’t actually seen that since being here. Its a much more relaxed environment with Coronavirus. It’s more like a few friends in a flat.’ 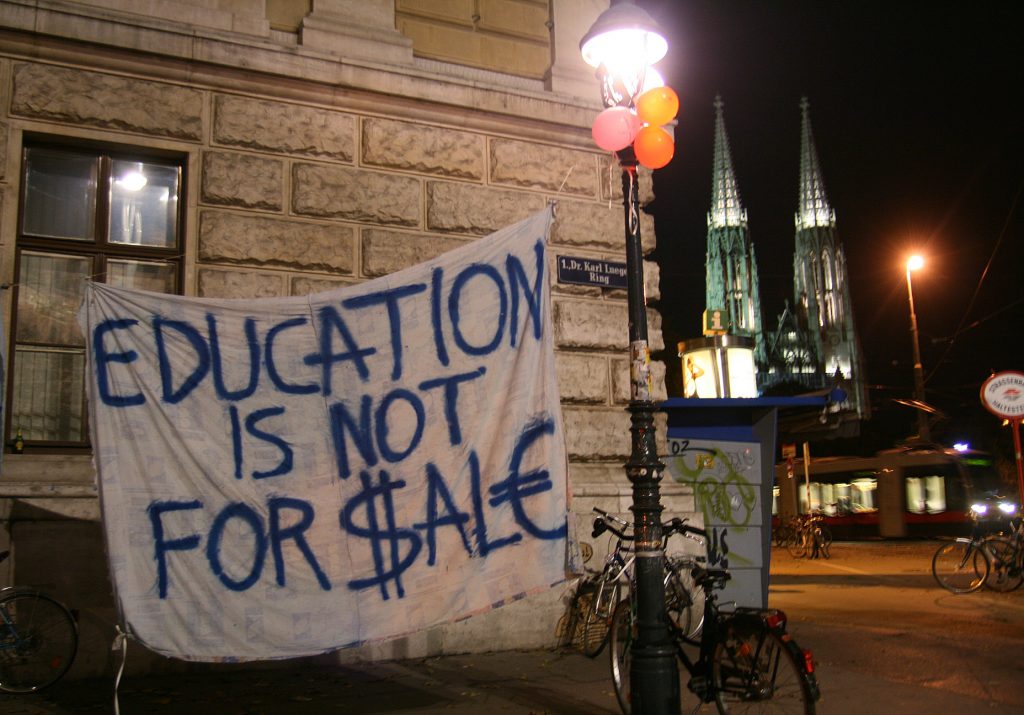 Student protest at the University of Vienna, October 2009

Without the prospect of a ‘big, fun night out’, ket and cannabis appear to be the drugs of choice. For a Tom*, a third-year student at The University of Birmingham, ‘pingers’ are out, cannabis is in. For another, party drugs ‘just aren’t really worth it’.

And it isn’t just because there’s no where to go. Aware of the potentially exaggerated psychological consequences of taking drugs in the context of an anxiety inducing pandemic, students appear to be approaching the situation in a more considered way.

According to Emily*, a student at The University of Leeds. ‘Theres a greater mindfulness of mental health and people are definitely taking it more slow.’ A good thing, for sure, but the sad reality is, this maturity is a consequence of a student mental health crisis exaggerated by the pandemic. ‘We’ve heard about a new suicide pretty much every week. There’s a consensus: don’t take it too far.’

The consensus is worthy of applause, but adhoc harm reduction is hardly sufficient. Confined to private spaces, away from medical teams that frequent venues and club nights, the risk of accidental overdose has increased nationwide. And yet, the majority of universities remain committed to a zero-tolerance narrative befitting of a post-truth society that has trouble reckoning with reality. Sometimes though, this self-induced false consciousness is less easy to maintain.

Wednesday brought the news of a death in the student community thought to be connected to ketamine. Should it be concluded that the tragedy was in fact drug related, that would bring the total – suicides excluded – to five drug induced deaths this term. And the response from universities? More of the same.

At Northumbria, the university at which two of the tragedies took place, the message was situated within the ‘just say no’ paradigm. Bordering on the delusion and tainted with blame, Vice Chancellor Chris Day took the opportunity to implore students not to “turn to excessive drugs and alcohol” in light of the “potential consequences”. Condolences were offered, a recognition of the need for change was not.

As Libby* told me, this is reflective of the broader absence of communication on the topic. Since the start of term, the message has been covid, covid, covid. The ‘constant reminder that you’re not aloud to mix with other people. That’s what they’ve been drilling into us.’ You could argue that this is justified. And further, that it’s typical. But in the absence of face-to-face teaching, with problematic use far hard to spot, sufficient harm reduction advice is more necessary than ever.

And, as recent events have shown, issues run deeper than ignorance. In a video posted to Twitter last Friday, a security guard from the University of Manchester, can be seen holding 19-year-old Zac Adan, a first year student who also happens to be black, against the wall, accusing him of “looking like a drug dealer”. The security guard has since been suspended and an investigation has been launched, but a delayed attempt at PR management is hardly sufficient. With a colonised education system and over a quarter of both Black (29%) and Asian (27%) students reporting racial harassment on campus, the added othering brought about by racial profiling is yet another mark against the institutions that claim to care.

There is one university taking a different approach. Last year, UWE Bristol (The University of the West of England) shifted from a policy of zero tolerance to harm reduction. As Senior Drug and Alcohol Practitioner, Becky Risley told me. The priority is the health and wellbeing of the student community.’

At UWE Bristol, students have access to ‘a confidential, non-judgmental space to explore their substance use’. Despite its relative newness, the service seems to have been keenly leant on during the pandemic. ‘Back in march, for a lot of students, things became unmanageable, quite quickly’. With a ‘lack of structure, and a deterioration in many students’ mental health, daily use manifest’, often with difficult consequences.

This time round, things appear different. Echoing the sentiments of students reference, Becky told me that ‘students have started to take a more holistic approach.’ Asking questions about the long term effects on mental health in the context of intermittent lockdowns, the focus has shifted from merely ‘the highs and lows’ and ‘the quality of drug-related conversation has increased’.

Even in the absence of official advice and the difficult situation that many students find themselves in, there seems to be attempts to take drugs in a (reasonably) safe way. True, you can never eliminate the risk entirely, and in the absence of proper legal regulation it is becoming increasingly difficult. But for trying, with next to no formal support, students deserve a round of applause. Universities (UWE excluded), with their ever zealous commitment to a zero tolerance narrative, do not.

*Names have been changed for the purpose of anonymity

Lola Brittain is a Research Officer at Volteface. Tweets @LolaBrittain

Investigating The Microdosing Experience: The Good, The Bad and The Unknown