New YouGov polls tell us what we already know: It is time for reform.

Data from a YouGov report on the perceived harm of drugs and strategies for their control was released today, offering compelling insights into Britons’ attitudes towards the impact of drug use and success of current policies.

The statistics highlight the extent to which the government’s rhetoric and policies are out of touch with the public’s will in several key areas: 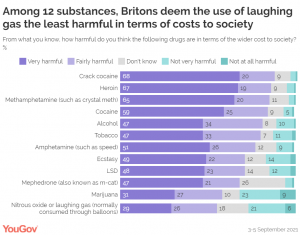 These statistics stand in stark contrast to Patel’s claim that a review is necessary to address the “devastating impact on lives and communities” that drugs (especially nitrous oxide) cause, and “protect the futures of children and young people”.

The data also reveals interesting insights into Britons’ acute awareness of the harms of legal drugs, perceiving alcohol to be more harmful to individuals than LSD, mephedrone, nitrous oxide and marijuana, and tobacco more harmful than amphetamines and ecstasy. Alcohol ranks higher than tobacco, amphetamines, and ecstasy, and just shy of cocaine in its perceived harm to society. 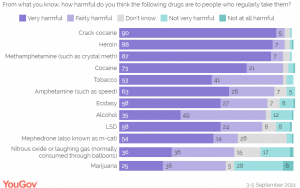 Further, promising indications of general support for drug policy reform were clear: Less than one in four people considered the criminalisation of a drug an effective means of preventing people from using them. 59% of Conservative voters classified it as wholly ineffective. 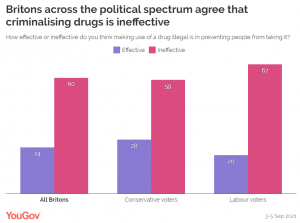 While it is clear that the general public views criminalisation as futile, it seems there is still a perceived value to criminal punishment, with 60% of Britons supporting legislation that treats drug use as either exclusively a criminal issue, or both a criminal and health issue.

Age appears to be a more influential factor than political preferences in dictating the extent to which Britons support a criminal justice-based drug strategy, where only 9% of those aged 18-24 believe that drug use should be an entirely criminal issue, rising to 29% at age 65+. 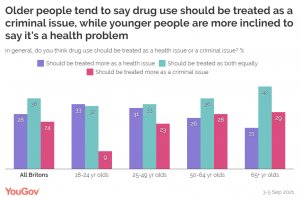 Finally, the statistics seem to indicate a strong foundation for cannabis decriminalisation or legalisation, as Britons rank cannabis the least likely to cause harm to an individual with only 25% of respondents classifying the drug as “very harmful”. This appears to counter the extensive media coverage of cannabis-related mental and physical harms.

Ultimately, it is clear that in almost every way the government is disconnected from the populace they were elected to serve in the best interests of. Many of the government’s recent actions, including Priti Patel’s review into banning nitrous oxide, her accusations of Keir Starmer being “weak on crime” in response to his support of Scotland’s effective decriminalisation of simple possession of Class A drugs, and the Home Office’s rejection of the implementation of Overdose Prevention Centres, all seem at odds with the British public’s perception of the ideal priorities for drug policies.

Following extensive coverage of Scotland’s recent move toward a public health-based approach to drug policy, reform efforts are increasingly at the forefront of popular and political attention. If the government wants to keep their voters on-side they must listen to their constituents, and shift to a policy no longer underpinned by criminalisation.

How Education is Professionalising the Cannabis Sector

What are drug consumption rooms?