Stephanie Gaffney and her eight-month-old Elliana, pictured above, are at Cincinnati’s Children’s Hospital Medical Centre. It’s a clinic for babies with neonatal abstinence syndrome, which happens when babies are born to mothers addicted to heroin. The children can suffer from sleeplessness, seizures, tremors and other withdrawal symptoms.

Gaffney used heroin and opiates for a number of years. The 28-year-old quit cold turkey when she found out she was pregnant.

She now lives with Elliana in a treatment centre and hopes for them both to move into an apartment soon. She just wants a normal life.

Gaffney is pleased and tells her they will be back for their next appointment in December.

“See you then,” Gaffney says.

Ten days later, she is dead from a heroin overdose. 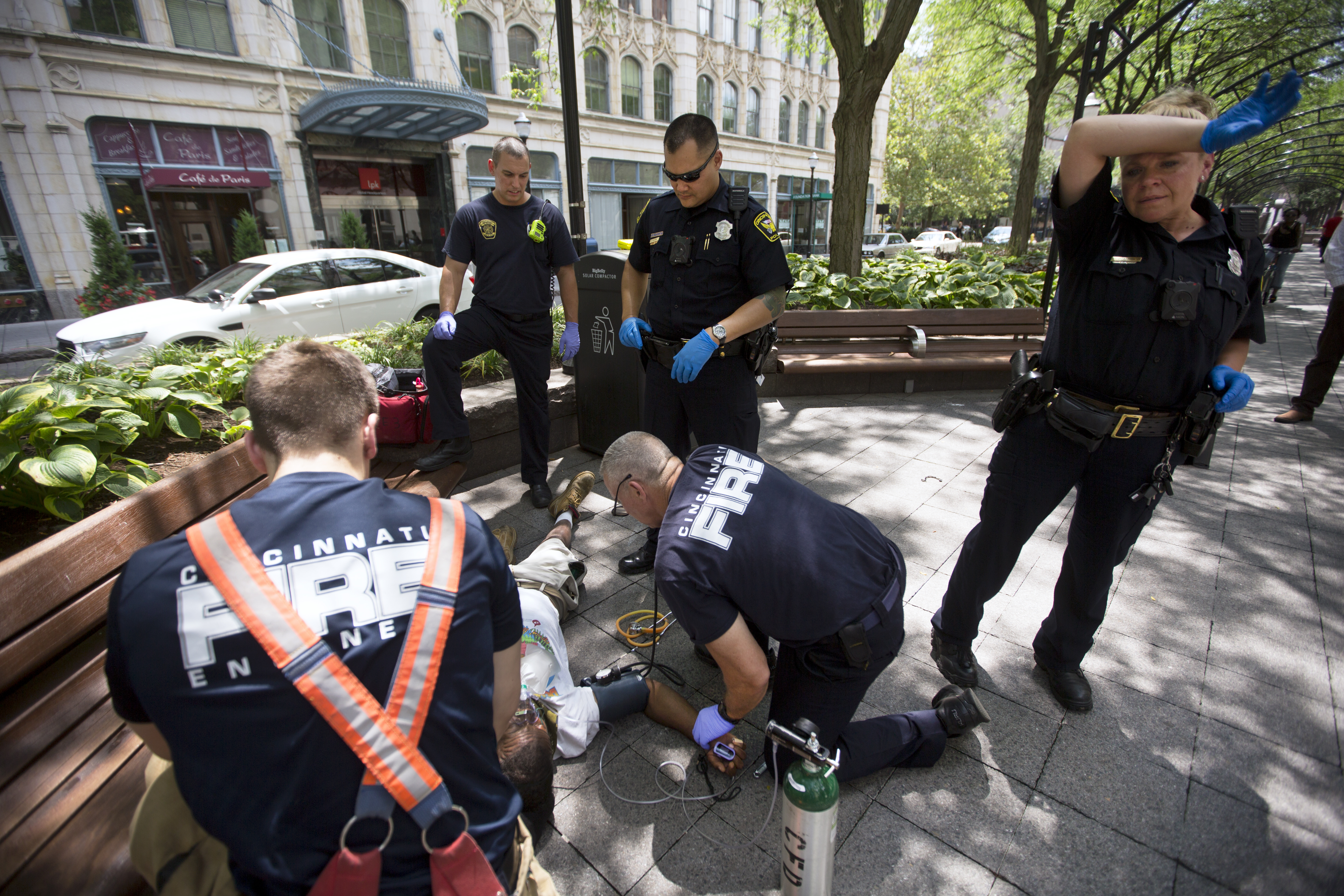 Cincinnati police and fire respond to an overdose at Piatt Park in downtown Cincinnati around 2:30pm on Friday. Police arrived on the scene first and administered one nasal narcan. Paramedics had to use an additional IV narcan before the man was revived. He rejected further treatment and walked away with friends. Credit: The Enquirer/Liz Dufour

Stephanie Gaffney’s harrowing story is one of many explored in an extraordinary project by the Cincinnati Enquirer on the city’s most pressing health crisis: ‘Seven Days of Heroin: This is what an Epidemic Looks Like’, published last week.

Over one week in July, the Enquirer sent more than 60 reporters, photographers and videographers into their communities to chronicle the personal and societal toll of the drug’s stranglehold over the city’s citizens.

By the end of the seven days, 18 people had died from heroin, there had been at least 180 overdoses, more than 200 heroin users were in prison and 15 babies were born with heroin-related medical problems. And these were just the officially recorded figures.

“We undertook this work – spreading our staff throughout courtrooms, jails, treatment facilities, finding addicts on the streets and talking to families who have lost loved-ones – to put the epidemic in proportion,” the Cincinnati Enquirer’s editor, Peter Bhatia, said.

“It is massive. It has a direct impact on every one of us. It doesn’t discriminate by race, gender, age or economic background. Its insidious spread reaches every neighbourhood, every township, every city, regardless of demographics. And it is stressing our healthcare systems, hospitals and treatment capacity.

“We set out to do this project not to affirm or deny differing views on the cost of battling addiction and its impact. Rather, we set out to understand how it unfolds day in and day out.”

Many of the stories uncovered are both poignant and deeply shocking.

The woman standing in a courtroom listening as the judge is told how she “tried to hide needles in her vagina after shooting up”.

The prostitute walking along looking for someone willing to pay her for sex so she can pay for her fentanyl and keep a roof over her head. “She’s 25 and addicted to the synthetic opiate. She used to take heroin, but now she prefers the more powerful and more dangerous synthetic,” we are told.

The seven-year-old girl in a psychiatric hospital who hasn’t been home since she found her mother slumped over the toilet last year after taking heroin. Her father died of an overdose earlier in the year. She had been placed with a foster family but that ended when she tried to drown her foster sister in a swimming pool. “After that, the girl’s doctors sent her here for more intensive treatment”.

The man lying in the street surrounded by medics. They’ve tried spraying the heroin antidote naloxone into his nostrils, but it hasn’t had any effect. He’s not breathing. “One of the medics takes a drill out of his bag and turns it on. It whirs like a dental drill as he pushes it into the man’s shin bone, trying to create a more direct path for the naloxone to enter the bloodstream. The medics install a stent and start pushing in doses of the life-saving drug. The man rouses and tries to stand. ‘Lay down buddy. You overdosed,’ a medic says. ‘We just brought you back to life’. Later, at the hospital, the man hops off the gurney and runs outside, the stent still embedded in his leg.”

The pastor who uses his sermon to preach empathy: “There are no perfect people. If you think you’re perfect, think again, because you’re not. It’s important to understand we all make mistakes.” 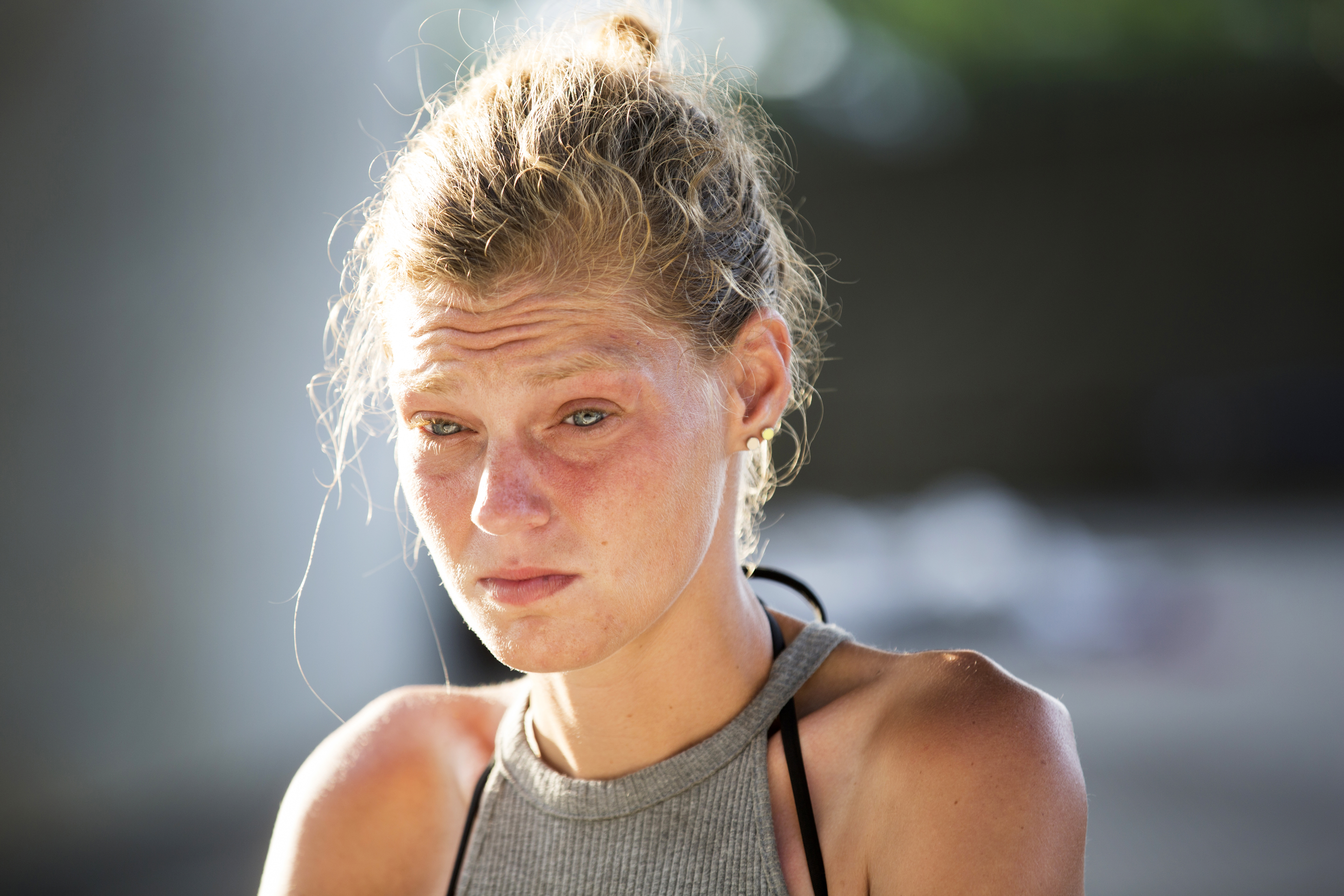 Terri, 26, was handcuffed after being awakened by Cincinnati Police Officer Tim Eppstein as she slept with her boyfriend, Corey, 27, under the overpass at 3rd and Elm in downtown Cincinnati. Eppstein, who works out of the Central Business District, visits the homeless encampments each week. His goal is not to arrest them, though he did arrest Terri because of six outstanding warrants on her all dealing with drug use. It was court ordered. Credit: The Enquirer/Liz Dufour

The judge looking over a man’s criminal record and telling him he has a choice between two doors: one leading to jail and the other to a treatment facility. “‘Which one are you thinking you want to go through?’” the judge asks. Jail. “‘You’re not going to change me’, he says.”

The couple who adopted their neighbours’ two babies after seeing them left strapped into car seats for hours or dropped off with friends for days at a time. “Sandy remembers hearing the girls cry and cry inside the trailer where they live, wondering why no one picked them up and held them and told them everything would be ok. Someone should be holding these babies, she’d tell herself. Someone should do something.”

Terry DeMio, the Enquirer’s dedicated heroin reporter, thought of the idea around ‘Seven Days of Heroin’ a few years back with colleagues and got the green light for the project in May.

“We wanted to show the depth of this disease in our communities, in our region,” she said. “We wanted to let people who’d been hearing and reading so much about this epidemic know what it is really like day to day on a typical week. So many people know it exists, but do they really understand how deep it is or how many are affected (everyone)?

“We wanted to use scenes – to observe like someone who’s looking on – what happened all day for seven days. We wanted to report the truth – the observations, sounds, scenery – but I told the staff that we had to be empathetic at the same time.

“I’d been living this epidemic through my work as a full-time heroin reporter in Cincinnati. I’d been in touch with countless families affected, people afflicted and heard every day about adult children taking off and not being heard from, about people who are grieving for children who are alive, but addicted. I thought ‘if only everyone knew what this is really like’.”

Despite some comments on social media, she said the response has been very positive – both from local residents and from around the world.

“People within our communities are thanking us for showing what this looks like here. We have been astonished that people reached out to us from around the globe. We have several speaking engagements linked up at universities and even a high school. There are some people who, in comments on social media, responded negatively: they don’t think people are afflicted with a disease, that it’s about ‘choices’, don’t use naloxone – it costs the taxpayers etc. But this has been met with, overwhelming, a positive response.”

At a time when drug-related deaths – particularly those related to heroin and opiate use – are at an all-time high in England and Wales and several cities are in the grip of a terrifying Spice epidemic, how the media reports on drugs and its willingness to do so is more important than ever.

The problems that can accompany drug use aren’t black and white. Journalists need the time to dig down into the subject’s complexity and nuances. 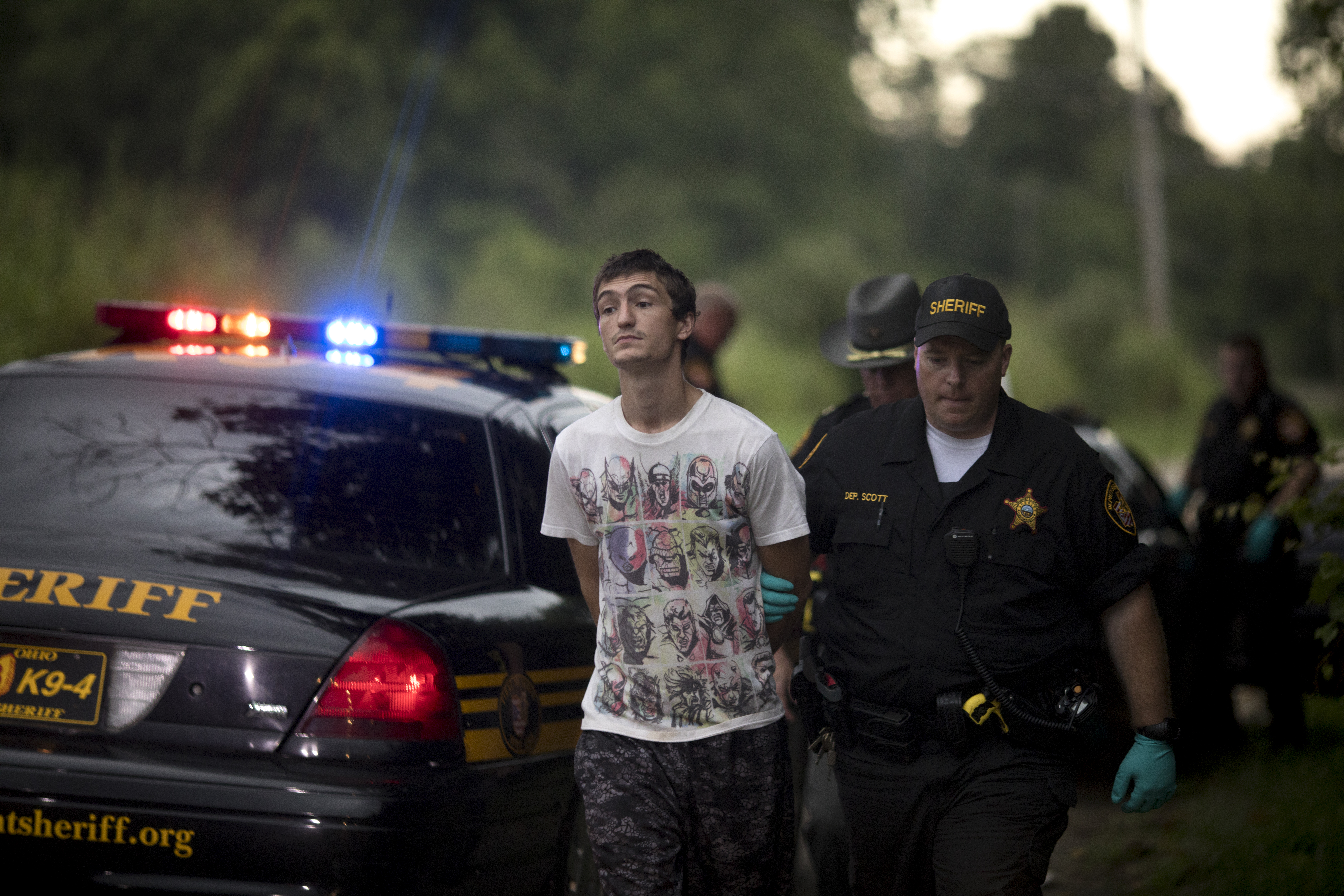 But, with increasing staff cuts, a lack of time out on the ground and dwindling investment in local and regional journalism in the UK, would reporters here ever get the chance to shine a light on a vital social issue in the same way the Cincinnati Enquirer has done with heroin?

“We, too, have been hit with reduced staffing multiple times,” DeMio said. “But this was something that our editors committed to, without hesitation. It was helpful that we have seven summer interns. Some of us wrote a story or two in advance. Most of the contributing reporters were not working full-time on this. A few of us were out on the streets much more.”

While the project ended up receiving funding from St Elizabeth Healthcare, a group of hospitals in northern Kentucky, it was dedicated editorial support that got it off the ground.

“It was just something we were going to do, no matter what, as it what recognised as valuable journalism, essential for our readers and viewers.”

‘Seven Days of Heroin’ is an approach to journalistic storytelling to be aspired to. We can learn a lot from it here in the UK.

You Can’t Beat The Market