With the ‘controlled cannabis supply chain experiment’ the Netherlands seems to be moving slightly towards legalisation. The experiment, starting in 2021, has been a widely discussed topic in the Dutch cannabis world. Joachim Helms, cannabis-entrepreneur and co-owner of coffeeshop Green House in Amsterdam has high hopes for the experiment. “I feel like the experiment could end up being a lot shorter than 4 years.”

The Green House coffeeshop, located in the heart of Amsterdam, is famous for winning the Cannabis Cup numerous times and hosting a number of celebrities including Rihanna, Snoop Dogg, Eminem and Miley Cyrus. One of the co-owners, Joachim Helms, has been in the cannabis industry for decades, always having lobbied for legalisation of the plant. Although full legalisation is not yet on the table, the Netherlands does finally seem to be moving into a new direction with a new experiment set to take place in 2021.

A little known fact about the Netherlands, which is of course famous for its coffeeshops, is that cannabis is not actually legal. As of now coffeeshops are allowed to sell cannabis because the Dutch government tolerates it, as long as they follow a list of rules, including not selling to under eighteens and not having more than 500 grams in their possession. The current toleration policy is also known as the ‘back-door policy’, because coffeeshop are allowed to sell cannabis, but not allowed to purchase.

However there might be a change coming with the ‘controlled cannabis supply chain experiment’. In this experiment ten municipalities, with a total of 79 coffeeshops will start selling legally produced cannabis, grown by one of ten government-designated growers. The aim of the experiment, according to the Dutch government, is to find out whether it is possible to regulate a quality-controlled supply of cannabis to coffeeshops and to see if the experiment has any effect on crime, safety and public health.

Still there’s a lot of discussion on whether or not this experiment is the way to go. Helms, having been in the cannabis industry since before the ‘90s, has been involved in the experiment since the very beginning. As former chairman of the Union of Cannabis Retailers he has organised gatherings and meetings in order to be able to represent coffeeshop owners and entrepreneurs all over the country. “What I think about the experiment isn’t necessarily important, because as part of a union I’m representing over 200 different coffeeshops. After hosting a number of gatherings with entrepreneurs about regulation and whether or not we want to be participating in the experiment, people were quite positive, but of course it’s always hard to accept change when you’ve done something the same way for a very long time.” 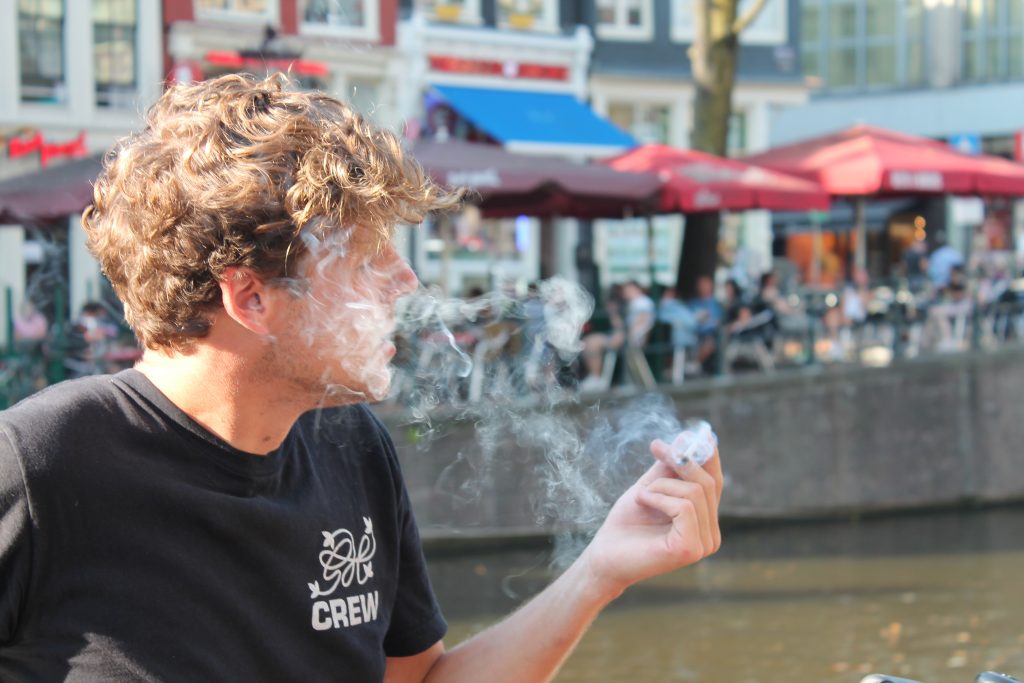 To show everyone what regulation and the process of legal cannabis looks like, Helms put out an open invitation to go visit some facilities in Canada. “At the moment we have a permit to grow cannabis in Canada. We ended up going there with about 50 people, from lawyers to advisors and coffeeshop owners. I spent three days showing them what the legal growing process looks like. By the end everyone was very surprised and excited to see what that was like. It was definitely an eye opener for a lot of people.”

Having had experience growing cannabis in Canada, Helms is also getting involved in cultivating in his home country. “We have owned a seeding company for over 25 years meaning we have our own plant genetics and brands. There’s a lot that we can learn from the way it goes in Canada and the US right now. Something that you see happening is that there are a lot of big companies entering the market, billion dollar companies. What people don’t realise, though, is that it’s not about how much money you have, but whether or not you can grow good cannabis.” Helms thinks that the experiment should have had a lot more than just ten growers. “In my opinion we should have a free market in the experiment. Instead of ten growers, have a hundred. That would make it a lot easier and it would stop the big players from taking over. Anyone that wants to grow, within certain requirements, should be able to. If your weed isn’t good enough, there won’t be a market for it anyway.”

Still there are some challenges ahead, like with hash for example. According to the 2019 National Drug Monitor by the Netherlands Institute for Mental Health and Addiction (Trimbos), 30 percent of people that visited a coffeeshop in the previous month preferred hash over weed. The problem being that most of the hash being sold in the Netherlands comes from Morocco. To produce one kilo of hash, you would need about ten kilos of weed, so to be able to provide all 79 coffeeshops in the experiment, might pose a challenge.

But is the experiment going to be successful? According to Helms it could be, depending on a few factors. “I feel like the experiment could end up being a lot shorter than 4 years. I think we will know whether or not it will be a success within a few weeks. A good result would be if they decide on growers that can guarantee products with enough variety, good quality and a price that can compete with the black market.”