When it comes to preventing the death of society’s most marginalised people, keynote speaker Professor Alex Stevens from the University of Kent kicked off last Monday’s conference by asking ‘do we care enough’?

Since 2013, drug related deaths have been rising year on year and in 2015 they peaked at the highest recorded rates in history, with no signs of stopping. But the drug related deaths are more than just a statistic. As Professor Stevens stated, this is an emotional issue, one which brings loss and despair to communities but which has received little action from the government because of who these people are, mostly middle aged, working class men who live in the most deprived areas in the UK. When laying out the four essential steps to addressing the rise in drug related deaths, Professor Stevens laid out that firstly we need to show we care, as ‘if we don’t care enough, how can we make them (politicians) care enough, to save these imminently preventable deaths’. 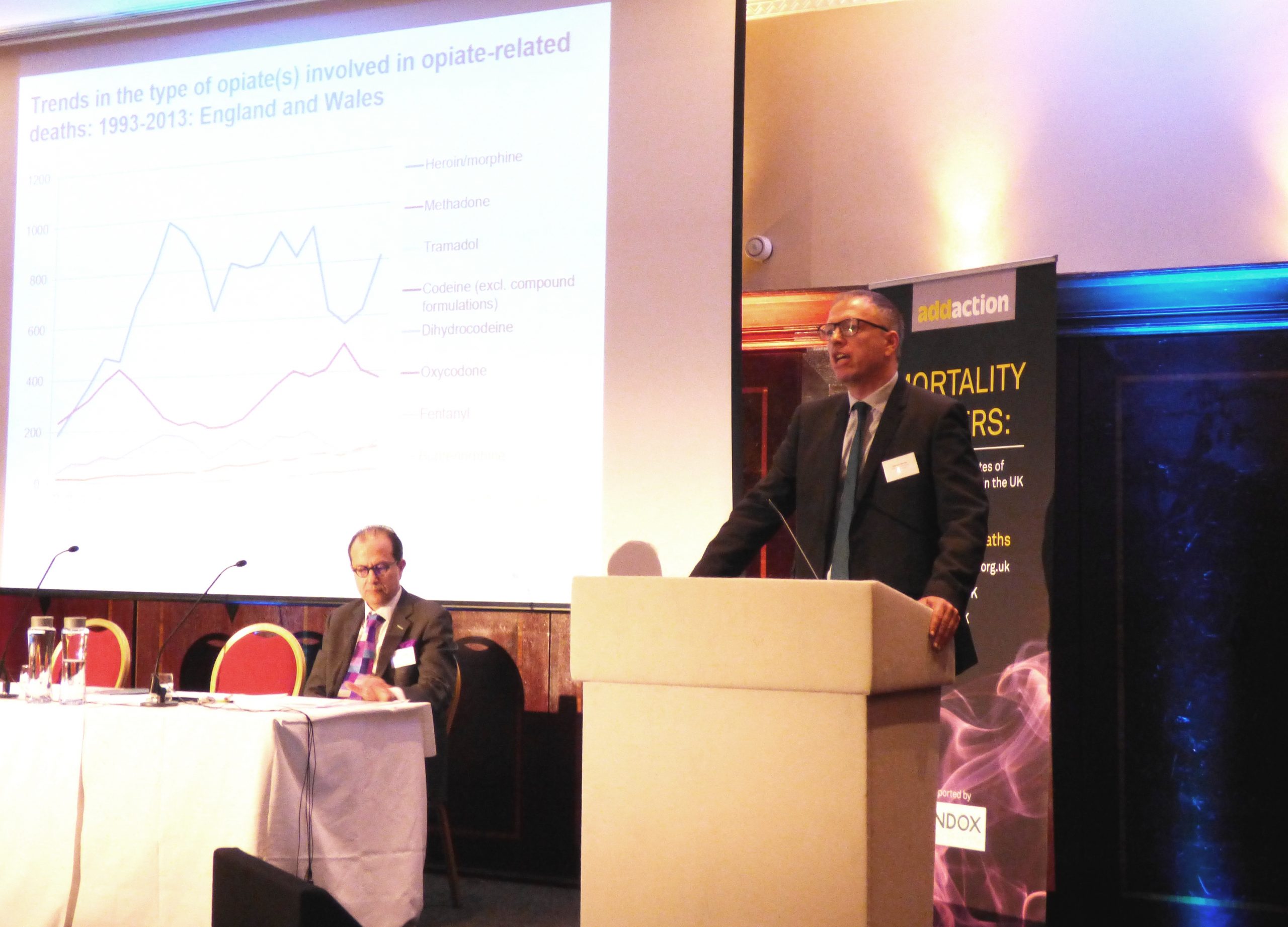 The next step was a call for investment in evidence based interventions, including Opioid Substitution Treatment and the wide distribution of naloxone to users, practitioners, peers and bystanders. Innovation is also required, including a widening roll out of Heroin Assisted Treatment, pilots of drug consumption rooms and research into new routes for naloxone. Whilst naloxone stays in an injectable format, it is unlikely to be sold over the counter. User Voice Service User Council Member Dillian Stott’s shared a powerful personal account of his experience of a heroin overdose warning that ‘without naloxone, I wouldn’t be here’. The final step would be integration with agencies such as probation, housing and mental health.

Moving onto how to maximise treatment to reduce opioid related deaths, Dr Jan Melichar, Consultant Psychiatrist and Medical Director at DHI South Gloustershire, advised that it was essential for patients to be receiving the correct opioid substitute dose. He explained there was a tendency for clinicians to prescribe doses that were too small to take effect, perhaps due to fear of diversion or because of moral and political reasons. He warned that by doing this, clinicians would be increasing the risk that the person will top up their opiate substitute with heroin.

But an effective response lies not just in maximising treatment but also maximising physical health. Poor lung health increases the risk of overdose and worryingly, many people who smoke heroin have COPD (chronic obstructive pulmonary disease), but receive a late diagnosis due to the difficulty of accessing health services. To respond to this health inequality and improve access to health services, the Liverpool Clinical Commissioning Group took the innovative step to fund spirometry (a test for COPD) at community based substance misuse clinics. Dr Sandra Oelbaum, Associate Medical Director and Primary Care Lead at Addaction, presented the findings from this study and out of the 73% of people who took part in the study, 49% had COPD and for 59% this was a new diagnosis. Liverpool’s study shows how effectively health services can be when they are designed around the people who need them. 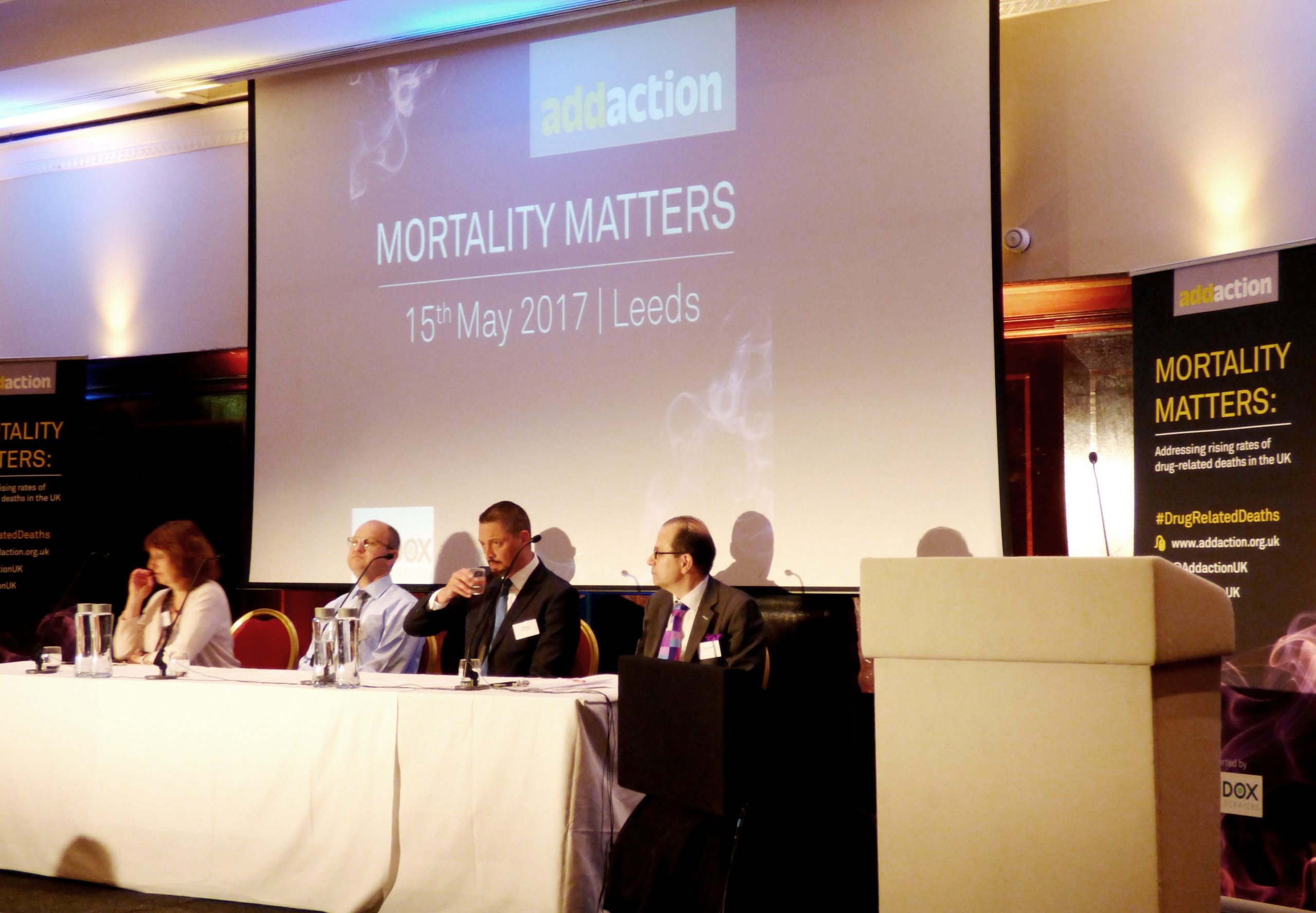 Dr Mark Piper, Head of Toxicology at Randox Testing Services, then took the conference in a new direction by exploring the complex world of synthetic substances. He explained that drug testing profiles currently test for the ‘old favourites’ including opiates, amphetamines, benzos and their effects are known and predictable, which makes treatment of them quite a bit easier. Synthetic substances on the other hand, particularly those which have been illicitly manufactured, are very much unknown as they have not been studied or been subjected to rigorous trials. Though drug tests are now starting to profile some synthetic substances, there are hundreds which still do not show up.

An innovative way of closing the gap of what is known about synthetic substances is RIDR (Reporting Illicit Drug Effects), a new national system for reporting the effects of new psychoactive substances. Dr Owen Boden-Jones, Consultant Psychiatrist and Honorary Senior Lecturer at Imperial College, talked the audience through RIDR, a Public Health England pilot which allows health professionals to input the harms of different illicit drugs. What RIDR does is able to draw patterns between the harms and drugs reported as well as gain understanding of how different drugs interact with each other. Hopefully, if the pilot is successful, it won’t just be healthcare professionals inputting data and it will be opened to people who use drugs. 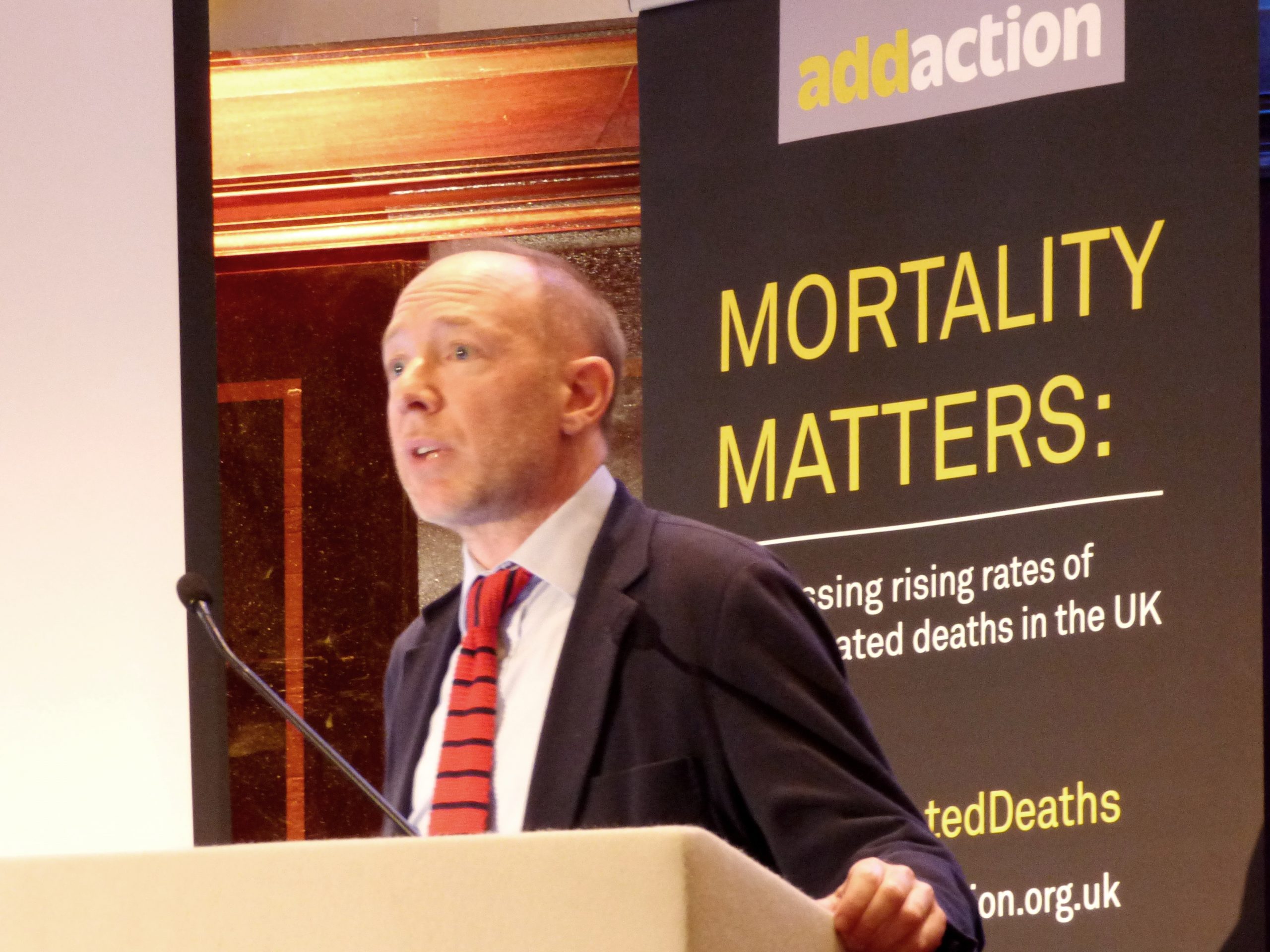 Mark Johnson, CEO of User Voice, emphasised the importance of consulting with people who use drugs during his discussion of User Voice’s most recent publication- Spice: The Bird Killer, What Prisoner’s Think About The Use Of Spice And Other Legal Highs In Prison. Rather than innovate mandatory drug testing, User Voice advise that prisons and services need to address the different reasons why people take drugs, which can include: existing habit, self-medication, coping strategies, boredom and enjoyment. 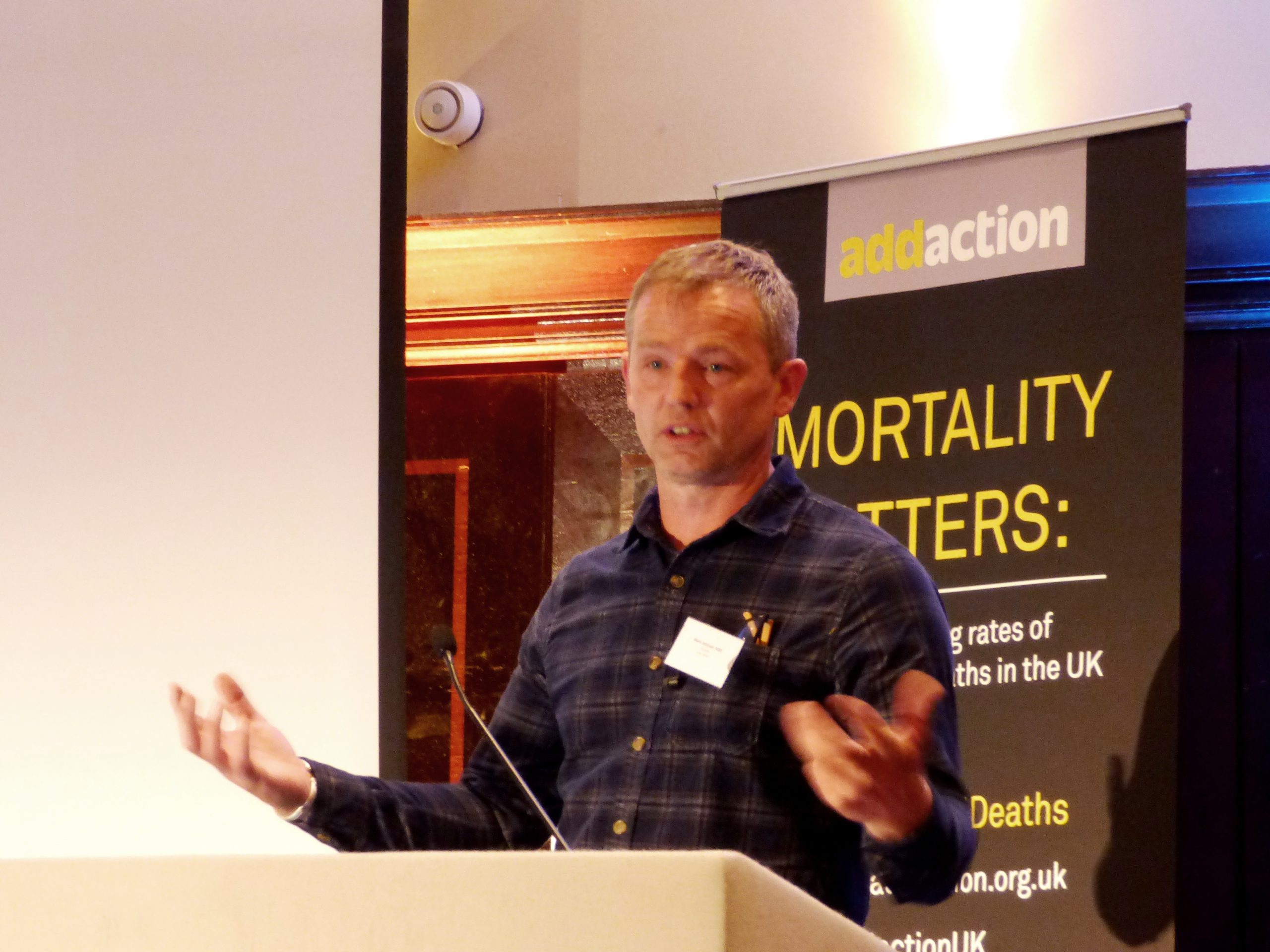 The conference then moved into the final segment of the day, with a panel made up of Anna Whitton- Executive Director of Operations at Addaction, Dr Prun Bijral- Medical Director at CGL, Dr David Bremner- Clinical Director at Turning Point and Paul Hayes- CEO of Collective Voice.  To respond to the rising rates of drug related deaths, providers such as Addaction, CGL and Turning Point are collaborating to ensure the sector is offering a consistent, evidence based approach. The NHS Substance Misuse Providers Alliance has been formed to identify what can be done to address all excess deaths related to drugs (not just overdoses), with the existing resources that are available. Paul Hayes explained that the alliance will be creating a shared statement of practice principles to: identify the people within services who are most vulnerable, offer clinical interventions to directly reduce overdoses, improve NHS engagement, maximise the amount of people treatment covers without pushing people out of treatment and engaging those most at risk.

Each of the providers are also undertaking additional responsibilities to develop specific areas of their provision and share learning. This is a significant development in the sector as due to the competitive tendering process, providers are incentivised to withhold innovations to ensure they stay competitive in the market.

Turning Point are aiming to improve commissioner understanding of drug mortality by inviting commissioners to sit in on morbidity and mortality meetings. These meetings involve a group of practitioners, who will discuss a death and identify what interventions were taken or could have been taken. Moreover, Turning Point are aiming to push back at the Care Quality Commission to ensure that care quality is determined by the overall wellbeing of the person, rather than rigidly applied, one size fits all standards.

CGL are exploring how they can use big data to work more effectively with fewer resources. CGL are creating systems which will use different indicators to highlight the people most at risk of overdose, and support practitioners to target interventions appropriately.

Addaction are prioritizing development work which draws on the service user voices by partnering with SUIT (Service User Involvement Team), a multi award winning drug and alcohol recovery service, which is managed and delivered by those in recovery.

Commenting on the conference, David Badcock Head of Events at Addaction, concluded that the whole day was ‘incredibly informative. Most interesting part was the final panel session. Three big providers on the stage together. There was a lot of continuity between what each of the provider’s feel is needed. It felt like there is a real will to change things for the better. Having that as part of the conference feels like a big step forward.’

Reflecting on the conference, Professor Stevens essential steps of investment, innovation and integration did ring true in every talk, and yes, to complete these steps, the sector does need to care. Sitting as a bystander, I would agree that the treatment sector does care, in fact it cares very much. There was a strong sense of urgency in the room, which was encapsulated by Addaction’s Executive Director of External Affairs Karen Tyrell’s concluding words, our ‘basic job is keeping people alive’. The actions coming out of Monday’s conference will determine how successful they are.

The Status Quo Has Changed In France