An association exists between cannabis use and schizophrenia. Cannabis use is seen at higher rates in people with schizophrenia than in the general population, a finding that has been consistently shown in population studies, although the magnitude of difference can vary quite dramatically from study to study. A meta-analysis of these studies conducted in 2007 suggested that heavy cannabis use was potentially associated with doubling the risk of psychosis. Not only that, but cannabis intoxication effects can sometimes resemble transient psychotic experiences. However, the existence of an association like this doesn’t necessarily mean that cannabis use causes schizophrenia.

In order to try and establish that, scientists like myself have to look at large numbers of people and run statistical analyses. But this is harder than it sounds, because we can’t run experimental studies to try and work out whether cannabis causes schizophrenia. If we could randomly assign a group of teenagers to either use cannabis or not, then see whether any of them get schizophrenia, we could get a pretty good idea of causality, but of course it’s both completely impractical and highly unethical.

Instead we have to observe what people choose to do, and this leaves us with a problem – the people who choose to use cannabis are likely to be different from the people who don’t in ways other than their cannabis use. This means when we see an association between cannabis and schizophrenia, we can’t really be sure that there’s not something else driving the association – perhaps some sort of experience in childhood that both increases your likelihood to use cannabis and your risk of mental health problems like schizophrenia. This problem is known as confounding. Not only that, but perhaps the people who use cannabis are doing so because of having schizophrenia or psychotic symptoms, known as reverse causation or the ‘self-medication hypothesis’.

With colleagues I’ve just published a new study using other study designs to try and untangle causation in associations between cannabis and schizophrenia.

We used a technique called Mendelian randomization, in which variables are identified that predict cannabis use (or schizophrenia) but aren’t subject to the same confounding, and used as proxies in the analyses. In the case of Mendelian randomization, the variables used are genetic predictors of either cannabis use or schizophrenia risk. Because we inherit our genes independently of the environment, and at conception, the theory is they shouldn’t be subject to the same confounding and reverse causation problems of more ‘traditional’ observational epidemiology. 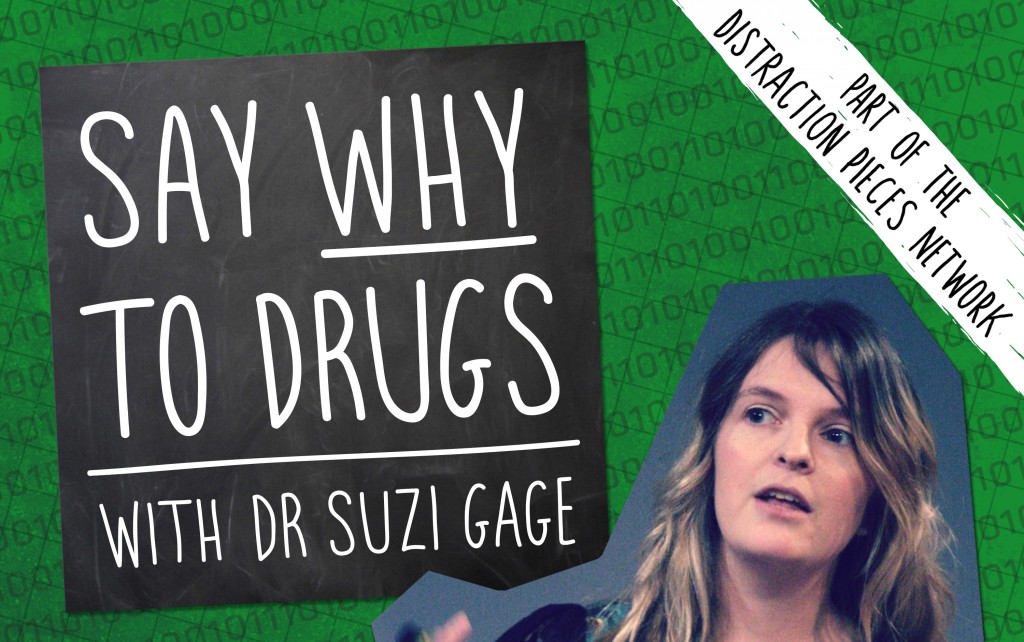 ‘Say Why To Drugs’ Podcast presented by Dr Suzi Gage.

So do our findings turn the idea of cannabis being a risk factor for schizophrenia on their head? Not necessarily. It’s perfectly possible that the association between cannabis and schizophrenia might operate in both directions – cannabis use might increase risk of schizophrenia, while having psychotic experiences might also increase likelihood to use cannabis.

Also, there are limitations to this study design. In particular, we used genetic predictors of cannabis initiation as our measure of cannabis use – whether people had ever tried cannabis. This isn’t a particularly useful measure – an awful lot of people have tried cannabis, so the genetic signal could actually be picking up traits like impulsivity, peer delinquency, that sort of thing, rather than necessarily cannabis use itself.

The really strong associations with schizophrenia that are seen in observational epidemiological studies are in heavy cannabis users, rather than just people who have ever tried it.

We had no way to look at the heaviness of cannabis use, to see if that predicted risk of schizophrenia, or to look at the type of cannabis used, which would be extremely interesting given recent findings suggesting that while THC can induce transient psychotic experiences, cannabidiol might actually be anti-psychotic, at least during intoxication.

In order to dig deeper into these findings, I’d really like to look more closely at these associations in heavy cannabis users, or those with cannabis dependency, rather than just people who’ve ever tried it. And to try and identify subpopulations of cannabis users who might be at higher risk of schizophrenia. Schizophrenia is a complex disorder and it’s likely to have many risk factors that all have small incremental effects. I’d love to delve further scientifically in to why those at risk of schizophrenia might be more tempted by cannabis too.

Listen to Say Why To Drugs, a podcast presented by Dr Suzi Gage here.

Dr Suzi Gage is a lecturer of Psychology, Epidemiology, Health Behaviours and Genetic Factors at the University of Liverpool, and writes the Sifting the Evidence column on The Guardian. Tweets @soozaphone