Christopher Snowdon is an author, freelance journalist and Head of Lifestyle Economics for the Institute of Economic Affairs, a London think-tank that focuses on the role of markets in solving economic and social problems.

Christopher has written extensively on the effects and causes of prohibition. In The Art of Suppression: Please, Panic and Prohibition since 1800, originally published in 2011, Christopher brings the story of drug prohibition to life, and puts forward the case for reform.

Ahead of our interview with Christopher, published next week, read an extract from The Art of Suppression shared below. 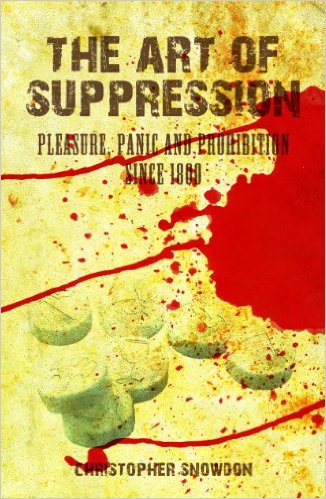 ‘A plan for the re-legalisation of drugs’

Any alternative to drug prohibition must aim to reduce intravenous use, keep drugs out of the hands of children and dampen demand for the most damaging derivatives of crack cocaine, heroin and morphine—all the things that prohibition has singularly failed to achieve. It would restore the right of consenting adults to take stimulants, narcotics, empathogens and hallucinogens for recreational and medical use while reducing drug-related crime to a level that has been unimaginable for much of the last hundred years.

The optimal system would take the narcotics industry out of the hands of criminals, regulate purity and quality, and collect the many billions in taxes that have been lost to the government. This money would then be used to pay for treatment and rehabilitation services for those struggling with addiction, as well as financing the agencies that would enforce licensing regulations and control minors’ access to drugs. These services could be offered at a world-class standard and still leave huge sums left over for governments to spend on other projects. The optimal system would, in other words, be closer to legalisation than decriminalisation.

For practical reasons, liberalisation should be introduced gradually. No one alive remembers what it was like to walk into a shop and buy laudanum or cocaine. After a century of systematic infantilisation, treating the public as adults might prove disorientating at first, but if the muscles of self-reliance and personal responsibility have been weakened through underuse, they can quickly be restored. One useful side-effect of the War on Drugs has been to leave several generations with an exaggerated sense of the risks of substance use which should help prevent a reckless binge when the clock strikes midnight.

A pragmatic legal market would allow licensed bars, coffee shops and private members’ clubs to sell opium and cannabis for smoking on the premises. Nightclubs and some bars would be permitted to sell pure MDMA. Pills, powders and tinctures containing amphetamine, cocaine and opium would be available from registered pharmacists with appropriate warnings and directions for use. Specialised licensed shops, equivalent to tobacconists or ‘head shops’, would be permitted to sell cannabis cigarettes, MDMA, smoking opium and hallucinogens for sale off the premises. In all cases, sales would be limited to those over the age of eighteen.

This would not be an entirely free market. Pure heroin and morphine would not be available except under doctor’s prescription for chronic disease, terminal illness and the maintenance of addiction, both under medical supervision and, in the latter case, subject to the patient accepting treatment for addiction. Marijuana would be available on prescription for sufferers of multiple sclerosis, glaucoma and other diseases where science has established proof of efficacy. Crack cocaine, methamphetamine and, perhaps, skunk would not be sold commercially, although it would be fruitless to try to stop individuals manufacturing or growing these drugs privately. THC levels in marijuana could be limited by law in the same way as tar levels are limited in cigarettes.

Regulation would be much tighter than for any other legal product. In the short-term, some variation of the Swedish Bratt System for alcohol might be appropriate, limiting the number of purchases that could be made within a certain period of time and forbidding sales to certain persons. Recovering addicts could enrol in a voluntary self-exclusion scheme based on the system which allows compulsive gamblers to ban themselves from casinos. Local authorities might choose to limit the sale of drugs to premises which do not also sell alcohol, but any regulation must be careful not to be so restrictive as to resurrect the illicit trade.

In the tradition of the bootleggers uniting with the Baptists, the big-time drug dealers can be expected to join the prohibitionists in opposing legalisation. It is quite possible that elements of the criminal underworld will shift their attention to other illegal activities once the narcotics gold mine is closed off to them, but legalisation would also free up enormous police resources to detect real crime. In any case, it is not the responsibility of government to provide lucrative openings for organised criminals.

It is possible that a black market will emerge purveying the most dangerous derivatives, but the illicit drug dealer will find the odds stacked against him in several ways. Under legalisation, even the most punitively taxed substances will cost less than half the price charged under prohibition. Addicts would receive their prescriptions free of charge and the legal availability of high quality opium and opium-containing tinctures should soften the demand for illicit heroin, morphine and methadone. These drugs, along with crack cocaine and skunk, are products of prohibition by virtue of their potency. Recreational users have historically preferred to take these drugs in their more natural, less hazardous forms and, under legalisation, the appeal of the strongest derivatives will be lost, except to the most hardened addict. Although it is highly improbable that these drugs will fall into disuse, especially in the first years of repeal, the availability of other options, combined with a well-financed harm reduction agency, should alleviate the worst of the damage.

The illicit dealer will also face a police force that is no longer hamstrung by the War on Drugs. The authorities will be able to direct their drug enforcement agencies at a greatly depleted black market serving a small minority of hardcore addicts and underage users. The illicit industry will be relatively impoverished and socially isolated while the police will be able to rebuild trust with otherwise law-abiding drug users who had previously viewed them with suspicion and fear. The legal vendors of drugs will have an incentive to inform the police about illicit sales, just as the Philippines’ opium monopolists did prior to 1908.

Liberalisation would allow some of the world’s poorest countries to grow their native crops and trade them openly on the international market. The poppy growers of Afghanistan and the coca growers of South America would continue their work without fear of intimidation and arrest. The manufacturers and smugglers could use their skills and contacts in the new legal industry, just as the illicit casino owners did after Britain’s gambling laws were relaxed in the 1960s. The small time drug dealers would find themselves unemployed, but since most of them only sell drugs to feed their own costly addictions, this would be no loss to anyone. Likewise, those who commit petty crime or become prostitutes to feed their addictions would no longer have to do so.

Driving under the influence of drugs would continue to be treated as seriously as drunk-driving, and intoxication from drugs (or drink) would not be viewed as a mitigating factor for any criminal offence. Upon repeal, prisoners convicted for the possession of drugs would receive a pardon and be released.

You can purchase ‘The Art of Suppression’ on Amazon