In recent years you could be forgiven for thinking there is very little to celebrate in the worlds of policing and crime prevention. Crime, as always, has dominated the headlines with alarming tenacity. Knife crime is going up, while 22,500 fewer officers are on our streets. Stop and search continues to spark controversy, while organised criminal empires expand using ‘county lines’. All this alongside uncertainty over the future of cross-border policing with our European neighbours.

In the midst of these developments are 40 individuals with enormous power to transform the way that the police and wider criminal justice system responds to these challenges. Most of the 40 have never served in the police, but all have been given a public mandate for change. These are the directly-elected Police and Crime Commissioners (PCCs).

Having worked for three PCCs over the last six years, I am aware of the cynicism around their role that remains with many in the police and the public. In some cases such cynicism is entirely fair. PCCs have far-reaching powers and set the budgets for police forces. Their ability to make a positive difference is huge, and so they deserve high expectations to be placed on them. Not all have risen to meet these expectations.

This is where I believe there is a good news story, if we consider the changes in recent years to the way we police drugs.

PCCs occupy a unique place in the police governance landscape. They set the strategy for the police and wider criminal justice system, while also holding the Chief Constable directly to account. PCCs in County Durham, the West Midlands and North Wales are actively promoting treating addiction first and foremost as a health issue rather than a criminal justice one. In other areas, such as Avon & Somerset and Thames Valley, police forces themselves are leading reform but with the consent (explicit or implied) of their PCCs.

This level of local drug policy reform was not possible before the introduction of PCCs – not without the consent of the Home Office at least, which never came. PCCs have broken new ground on British drug policy and there is very little mechanism for reigning them in. Those with a legal responsibility to scrutinise their PCC are considered to have insufficient powers or inadequate resources to effectively do so. This is a worrying arrangement, but does overcome the fact that evidence-based drug policy has often been stifled in the world of party-political point-scoring.

The power to curtail PCCs lies firmly with the voting public, once every four years, rather than with local councillors. Ron Hogg, the original PCC advocate for a fresh approach to drugs, saw his majority increase at the 2016 election. It is difficult to say whether this is despite or because of Mr Hogg’s very vocal campaign for a ‘sensible not soft’ approach to drugs, but certainly implies that such an approach is not broadly unacceptable to voters.

No matter which way you look at it, the harm associated with Class A drugs such as heroin and crack-cocaine is unacceptably high. Public Health England predict that there an estimated 313,971 people using opiates and/or crack-cocaine in England.

When I led on drug policy in the West Midlands, we used the latest Home Office figures to measure the cost to society of every person using these drugs. This was £62,320 per person when considering only four indicators: drug-related crime, health service use, drug-related deaths, and social care. The figure for the West Midlands crack and opiate-using population is an eye-watering £1.4bn.

By the same methodology, the cost to England – and by extension, English taxpayers – of heroin and crack-cocaine use is around £19.6bn.

PCCs were born in the context of austerity. Some more cynical commentators even suggested that they could be a scapegoat for government cuts to police funding. Either way, two competing and opposing forces have been at the forefront of every PCC’s mind since 2012: funding going down while demand for police is going up.

Resistance to a health-led approach to addiction is in part a consequence of the reluctance to spend money on drug treatment services. As austerity squeezed local councils, budgets for drug treatment services were among the first to be cut. Arguably another consequence of making this health service subject to election cycles where politicians are acutely aware of pleasing voters. It’s not to say that voters do not want people to be treated for their addiction. Only that those more likely to vote probably feel cuts to bins and buses more acutely.

I once attended a conference on organised crime where the then Home Secretary Theresa May challenged police to embrace austerity as an opportunity to focus on their priorities and be smarter. A tough pill to swallow given the loss of so many officers and staff.

Some PCCs have embraced this issue though, insisting that the cost of problematic drug use is set in the context of current policies. The logic follows that if our policies were working, addiction would not be costing society so much. This isn’t just a matter for the public purse. The true cost of addiction is felt in the vast range of harm and crime associated with it. When it is all added up, it becomes clear that we simply cannot carry on like this. 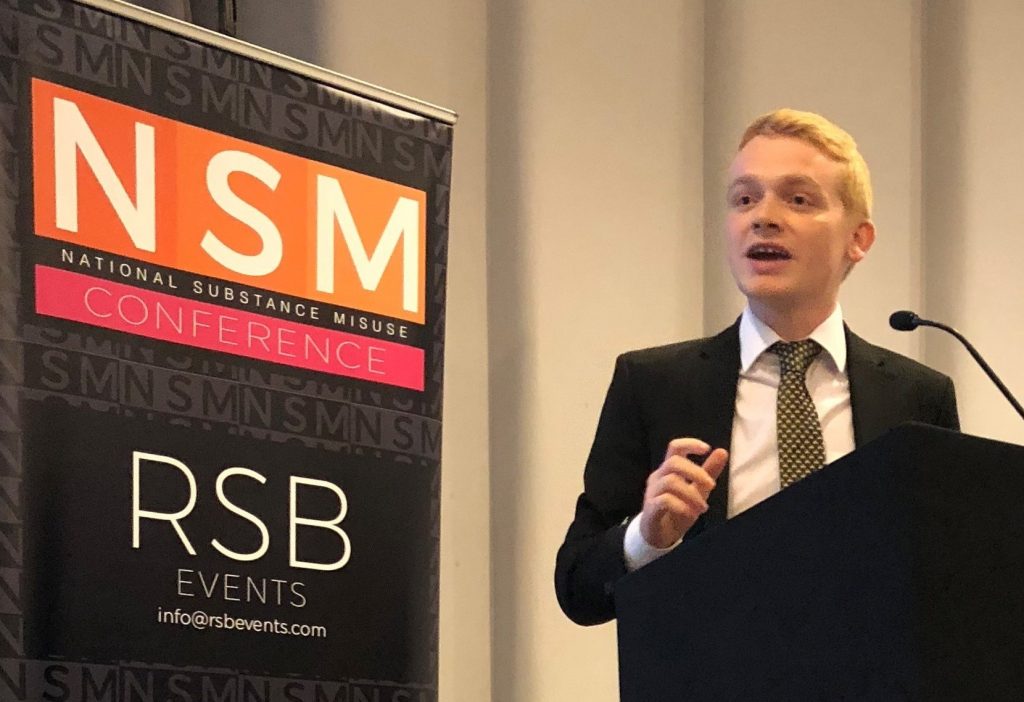 For many years, campaigners for a health-led approach to drugs have felt like they are pushing against a brick wall. Calls for changes to the law, the recent victory on medical cannabis aside, have largely been ignored by successive governments. The brick wall has not buckled. In England, the Misuse of Drugs Act 1971 continues to be used every four minutes in the enforcement of drugs offences. When the Home Office had greater powers to control policing strategy, they were entwined with the very same governments that would not
give any ground on legal matters.

PCCs are a move away from that. The political courage of one PCC does not rely on the political backing of another. The government have almost no powers to direct them, and their parties do not use a whip system to control them. If they want to pursue diversion schemes so that people are no longer charged for drug possession offences, they can do it. This already happens in County Durham, Avon & Somerset, and Thames Valley. Other PCCs are promoting similar schemes and we can expect several more to be launched this year.

Keeping people suffering from addiction out of prison does not mean they are free to harm others. In County Durham, they have focused on the right support instead of the wrong conviction. For those engaged with the ‘Checkpoint’ diversion scheme, reoffending rates have fallen by 40%.

Keeping people suffering from addiction out of prison does not mean they are free to harm others. In County Durham, they have focused on the right support instead of the wrong conviction. For those engaged with the ‘Checkpoint’ diversion scheme, reoffending rates have fallen by 40%.

PCCs are expected to take a strategic view of the criminal justice system. They should know that one in five heroin-using prisoners try heroin for the first time while in prison. Traditional criminal justice routes are not fit for purpose in tackling addiction or its associated harms.

There is no evidence to suggest that the decision to prosecute changes rates of drug use – in other words, prison as a deterrent is a myth. This is in line with the Home Office’s own findings which concluded in 2014 that: “Looking across different countries, there is no apparent correlation between the ‘toughness’ of a country’s approach and the prevalence of adult drug use”. These facts are changing the debate locally.

Drugs policy reform is no longer something that waits for a Royal Commission or a Green Paper. It is something that is happening right now. Who knows when the next PCC will break their silence on the topic and begin to pursue a new way? It is difficult to say. But we can say with some certainty that, when they do, the local drug policy environment can change very rapidly.

PCCs considering action should bear this in mind. So should police forces that are tired of doing the same thing over and over and getting the same results. Campaigners who have fixated on the law should consider the vast range of policy options that can lead to reductions in crime, harm and cost to the taxpayer.

In many ways, drug policy could be the first great harvest for this new role of PCC. They have planted new fields of possibilities and are already beginning to reap the rewards. Drug policy is fertile ground for change, yet the Home Office appeared content to leave large sections of it untouched for decades.

Without PCCs, it is likely that these local drug policy reforms would lack the ambition and the honesty that they do. For some time there has been evidence for what could be done differently, experience revealing what is not working, and pressures on funding and demand that make the case for change more urgent. PCCs are the final piece of that puzzle, capable of the strategic leadership needed to drive through reform.

The criminal justice system could be argued to have over-reached in trying to enforce against a health issue. That is why a small group of PCCs are leading the calls in England and Wales for policies such as heroin assisted treatment, drug consumption rooms and the safety testing of drugs at festivals. These are interventions aimed at the outcome of reducing harm rather than the process of making arrests.

PCCs, who can often be overlooked as key decision-makers, are making a real difference to drugs policies and the lives they affect. Is your PCC one of them?

Ben Twomey is the former drug policy lead for three Police and Crime Commissioners, in West Midlands, Warwickshire and County Durham. He has also led on related issues including stop and search, organised crime, youth engagement and homelessness. Ben’s policies have been praised by Government Ministers, Cross-Party Parliamentary Groups, national treatment agencies and senior police officers. Ben authored the West Midlands Drug Policy in early 2018, transforming the region’s response to substance misuse with plans that included diversion schemes, heroin assisted treatment, safety testing of drugs at festivals, and kitting out police officers with the heroin antidote naloxone. In County Durham, Ben was involved in early discussions for the ‘Checkpoint’ diversion scheme, which since 2015 has led to fewer criminal records for drug possession and reoffending rates falling by 40% among those on the programme.