Fired Up: Why Are Ecstasy-Related Deaths Rising In The UK?

The number of ecstasy-related deaths

Based on the annual reports of three UK government departments, the total number of deaths associated with use of ecstasy (MDMA) in the UK in 2015 was 76, the second highest number ever recorded – after 79 in 2002, and equalling the number in 2001. Statistically, this means that there was an ecstasy-related death about every four days in 2015. The UK total includes: 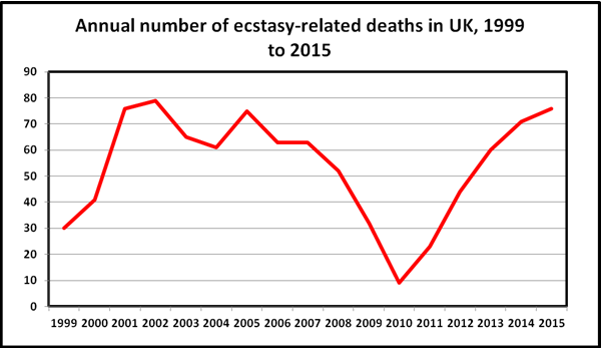 The rate of ecstasy-related deaths

As already noted, there were 63 ecstasy-related deaths in England & Wales in 2016 – the highest annual number ever reported (see Graph 2). This averages one death involving ecstasy about every six days (though this is based on MDMA only, and excludes the 3 deaths attributed to PMA/PMMA tablets, which were probably sold as ecstasy). Employing CSEW figures, this works out as one ecstasy-related death per 6,968 last-year users of ecstasy.  Expressed as a standard mortality rate, this is just over 14 deaths per 100,000 last-year users of ecstasy. 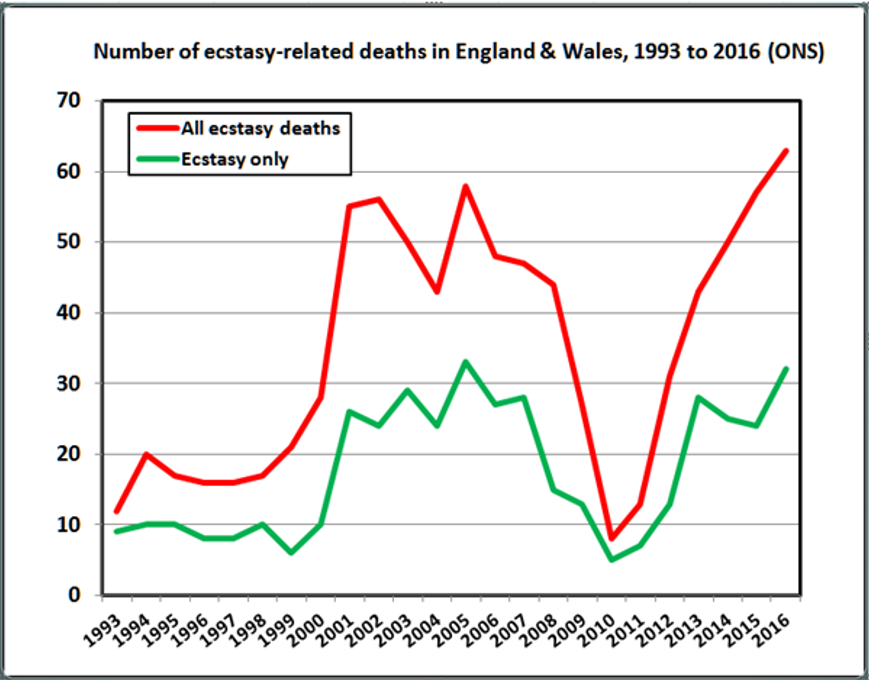 Employing my Risk Assessment model for comparing the annual mortality risks of different kinds of drug use with those of leisure pursuits and other activities, the mortality rate of one ecstasy-related death per 6,968 last-year users of ecstasy in 2016 is classified as a medium risk – around 1 death per 10,000 users (in precise terms: between 1 in 5,000 and 1 in 50,000 users).  In short, the annual mortality risk of using ecstasy is broadly equivalent to the risk posed to participants by motor sports, water sports, mountain hiking, being a road user, giving birth, liposuction, taking anti-depressants and being in police custody. The mortality risk faced by ecstasy users is also a level lower than the risk to participants associated with drinking alcohol, snorting cocaine, air sports, mountain climbing, motorcycle racing, air pollution, and having medical treatment (a quite high annual mortality risk level of around one in 1,000); and two levels lower than the risk associated with smoking tobacco, drug injecting, base jumping, and having surgical operations (a very high annual mortality risk level of around one in 100).

The causes of ecstasy-related deaths

That’s how safe ecstasy use is – or how lethal it is, depending on how you look at it. Though more research is urgently needed into the causes of ecstasy-related deaths, most are probably related to heat exhaustion and its more serious manifestation as heatstroke (involving a rise in body temperature to over 40.6 °C). These are consequences of hyperthermia, a key effect of MDMA (drug) interacting with individual genetic predispositions (set) and the club/festival environments in which MDMA is commonly consumed (setting). The medical conditions following on from MDMA-related heat exhaustion, and which often result in death, include disseminated intravascular coagulation and rhabdomyolysis.

One of the main causes of the rise in ecstasy-related deaths is likely to be MDMA poisoning, linked to the increased potency of ecstasy products over the last decades. Data from the National Crime Agency reported by the UK Focal Point on Drugs shows a steady rise in the MDMA content of ecstasy tablets in England & Wales, from an average of 33mg in 2008 to 102mg in 20 12. Though the strength of ecstasy tablets dropped slightly to 90mg in 2014, there have been numerous reports in 2016 and 2017 of high-potency ecstasy tablets with MDMA content up to 300mg.  Gable’s review of research on the acute lethal doses of psychoactive drugs concludes that the LD50 (average lethal dose) of MDMA is two grams, while the ED50 (average effective dose) is 125 mg – giving a safety ratio (LD50:ED50) of 16 to 1.  However, more susceptible individuals – including women, those of lower weight, and those with less efficient livers – can and have died from using as little as half a gram of MDMA (about four standard doses or just two of the increasingly available higher-purity tablets).

The other causal factors underlying the recent rise in ecstasy-related deaths include adulterants in ecstasy tablets and powder (notably PMA and MDA), poly-drug use, and intoxication-related accidents. Regarding adulterants, PMA and/or PMMA were reported to have been involved in 86 deaths in England & Wales in the 5-year period from 2012 to 2016, compared with just 2 deaths in the previous two decades. This is an average of one PMA/PMMA-related death every 3 weeks between 2012 and 2016 (though the number dropped significantly to just 3 in 2016).

Regarding poly-drug use, Schifano et al. (2003) reported that, of 202 ecstasy-related deaths registered in the UK in the 7-year period from August 1996 to April 2002, a clear majority (83%) involved other drugs used in combination with ecstasy – notably alcohol, cocaine, amphetamines and/or opiates.  Poly-drug use has become the norm among clubbers and partiers in the second decade of the 21st century, a trend boosted by the emergence of new psychoactive substances (NPS) use and ‘chemsex’. As noted above, the latest ONS bulletin on drug-related deaths in England & Wales reported that 49% of the 63 ecstasy-related deaths in 2016 involved other drugs, and that 17% involved alcohol in combination with ecstasy. 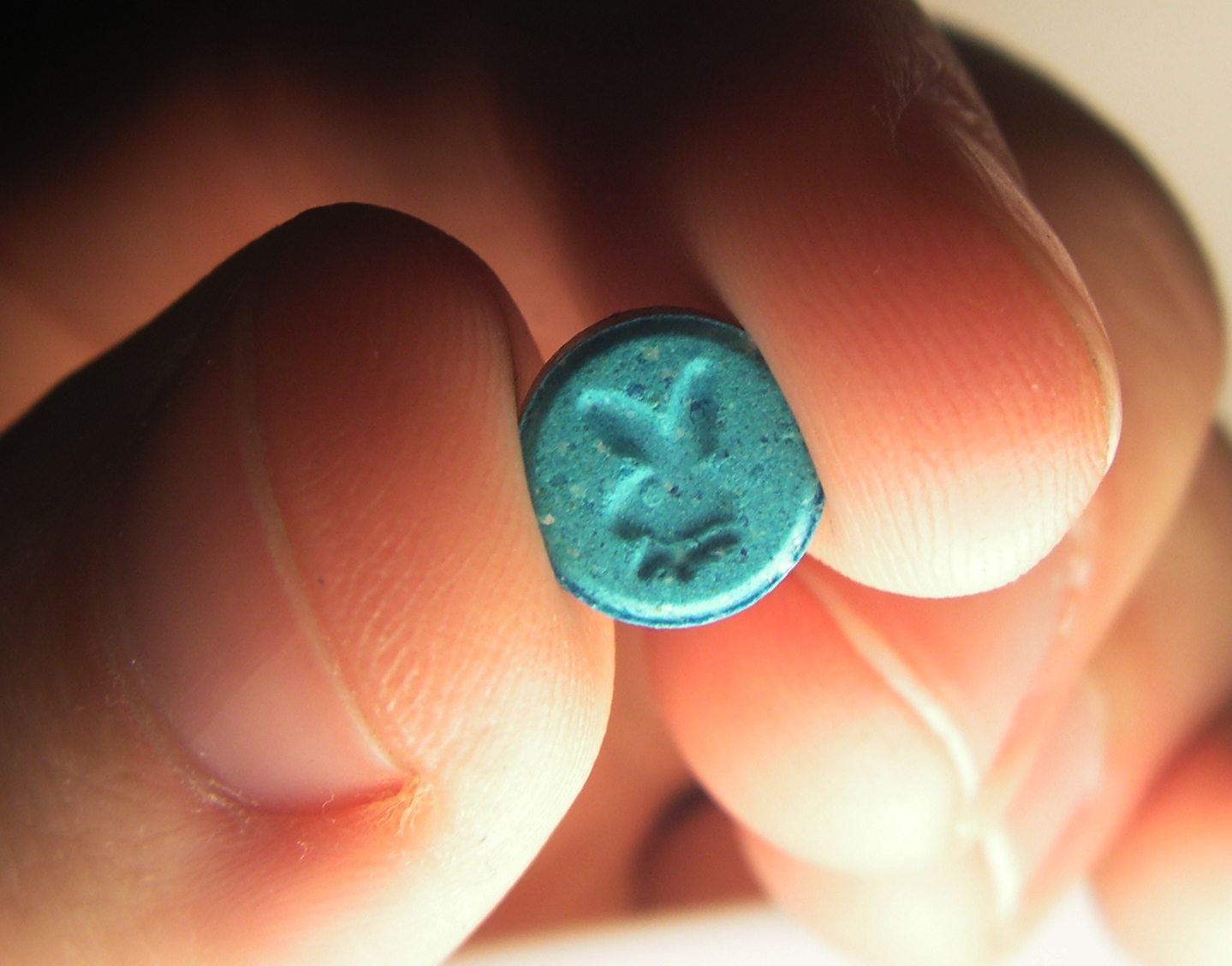 Other possible harmful consequences of MDMA use include neurotoxicity (notably the serotonin syndrome), and negative effects on mood and memory. But it should also be noted that MDMA has beneficial as well as harmful consequences, including improvements in empathy, communication and positive emotions, and knock-on effects on interpersonal relationships and the treatment of psychiatric disorders like PTSD and depression. Quantifying these harms and benefits is far more difficult than estimating the mortality risk, and there is little systematic research to help us assess the types and levels of risk associated with ecstasy use. More worryingly, the UK government’s latest drug strategy contains little in the way of precise recommendations for interventions to reduce deaths and other harms associated with the use of ecstasy, even though promising interventions have been developed and tested since the early 1990s – such as advice on safer ecstasy use, safer clubbing guidelines and, more recently, drug checking.

Serious consideration also needs to be given to the legal regulation of MDMA, since many of the causes of ecstasy-related deaths are clearly created or exacerbated by drug prohibition – particularly adulterated and high-dose tablets and powders. Bizarrely, while claiming that its drug strategy is rooted in scientific research, the UK government continues to reject evidence–based advice for urgent drug policy reform from its own committees and councils, and from a wide range of health and criminal justice bodies – from the British Medical Association to the World Health Organisation and United Nations.  I suspect that this and previous governments’ continued rejection of these persistent authoritative calls to end the failed ‘war on drugs’ rests on the rotten cornerstones of: circular moral reasoning (‘drugs are banned because they are bad, and they must be bad because they are banned’); corruption (financial support from the alcohol and pharmaceutical industries, which regard ecstasy as unwanted competition for their own products); cowardice (fear of public outrage and loss of support from voters); and sheer stubbornness and ideological blindness (“we have no intention of decriminalising drugs. Drugs are illegal because…they are harmful to human health … It is overly simplistic to say that decriminalisation works” – HM Government, 2017: 16-17).

Ecstasy-related deaths are one tip of the UK’s iceberg of drug problems.  Over a million British people now use illicit drugs like ecstasy and cocaine. There are recent signs that use of some of these drugs is rising again. There are more drugs available than ever before, and many traditional drugs have become purer and cheaper.  Many drug users end up in prison, and the prison system is in meltdown.  For these and other reasons, drug-related deaths and other drug-related harms have risen to unprecedented levels. Clearly, our national drug strategy is now worse than ineffective – it’s counter-productive.  The argument that the consequences of legal regulation would be worse than those of prohibition is starting to look increasingly implausible.

Russell Newcombe is a social psychologist and freelance drug researcher, specialising in drug use (prevalence and consumption), the psychosocial effects of drugs, the reduction of drug-related harms and risks and on drug policy reform. Tweets @TheNewImpostor

What Should Universities Do About Students Who Take Drugs?