How Risky Is Ecstasy?

A version of this article was originally published on LinkedIn.

I first made comparisons of the annual mortality rates associated with the use of ecstasy and other activities in articles I wrote in the 1990s. In the following decade, Professor Nutt’s work brought far more media and other attention to these issues – notably his statement that ecstasy was statistically no more dangerous than horse riding.

My main goal was to stimulate debate and research on these issues, because so little research was (and is) being done to investigate them. Death is undoubtedly the most harmful consequence of using ecstasy or other drugs, and if we are to reduce such deaths we need to know much more about their nature, prevalence, and causes.

Based on the annual reports of two UK government departments, the total number of deaths associated with use of ecstasy (MDMA) in the UK in 2015 was 72 – including 57 in England & Wales (the second highest reported number after 58 in 2005) and 15 in Scotland. These figures do not include ecstasy-related deaths in Northern Ireland because they have not been released at the time of writing – though there were 7 such deaths in 2014, the highest annual number ever reported (equalling the number for 2005). 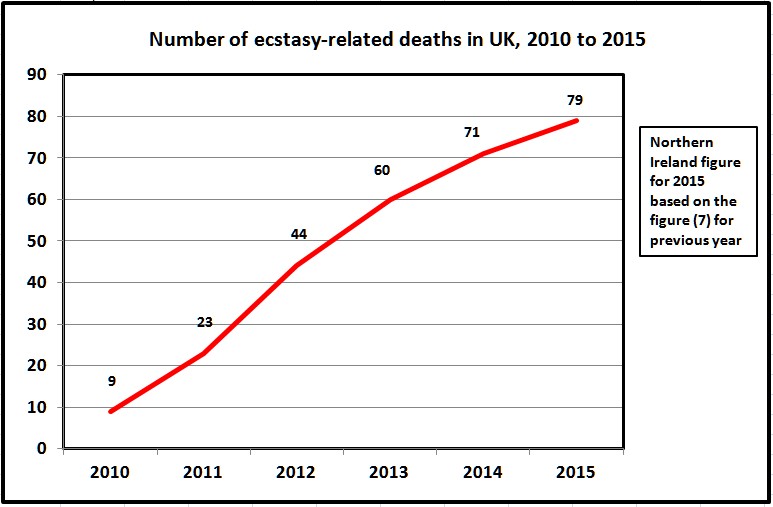 Focusing on England & Wales, annual mortality rates among ecstasy users can be calculated using estimates of the prevalence of illicit drug use from the Criminal Survey for England & Wales (CSEW), a household survey conducted every year by the Home Office. The CSEW estimated that 492,000 adults (16 to 59 year olds) last-year users of ecstasy in 2015/16. As noted above, there were 57 ecstasy-related deaths in England &Wales in 2015 – about one a week (though this excludes the 10 deaths attributed to PMA/PMMA tablets, which were probably sold as ecstasy). This works out as one ecstasy death per 8,632 last-year users of ecstasy.  Expressed as a standard mortality rate, this is almost 12 deaths per 100,000 last-year ecstasy users – equivalent to 116 deaths per million last-year users.

However, it must be noted that there are many other factors which need to be taken into account when assessing the mortality risks of using ecstasy and other drugs, and this brief article is intended only to give a broad picture of these issues. These factors range from genetics (e.g. around 1 in 10 people have livers which predispose them to reacting ‘badly’ to ecstasy) to the setting of ecstasy use – notably nightclubs, where contextual factors like ambient temperature, crowding, vigorous dancing, and restricted access to water contribute to the sub-group of deaths involving heat-stroke/exhaustion.

So, in broad statistical terms, that’s how safe ecstasy use is – or how lethal it is, depending on how you look at it. Research has also identified non-fatal risks associated with ecstasy use, including harmful effects on mood and memory – though potential benefits of ecstasy use have been identified too, including experiencing altered states of consciousness involving improved empathy, communication and positive emotions, and possible long-term beneficial effects on personality and relationships.

Quantifying these harms and benefits is far more difficult than estimating the mortality risk, and there is little research to help us assess the types and level of risk associated with ecstasy use beyond the general mortality rate. With almost half a million people using ecstasy over a one-year period in England & Wales, and over a million using illicit drugs other than cannabis, this is a major drawback with our prohibition-based public health strategy toward users of ecstasy and illicit drugs in general.

The Social Order of the Underworld: an extract