It’s been just over two years since Leafly became the first cannabis company to place a full-page consumer advertisement in the New York Times.

In July 2014, New York became the twenty-third state to legalise medical cannabis under the Compassionate Care Act, which allowed access for patients with certain qualifying conditions. The next month, in August’s first Sunday edition, Leafly celebrated the new policy and encouraged readers to “Just Say Know,” inviting them to learn more about medical cannabis to make informed decisions about their health.

At the time, I summed up the belief behind the ad as this: “One of the ways you knock down the Berlin Wall of prohibition is by talking about cannabis in a mainstream way.” The Leafly ad felt straightforward and approachable, putting that belief into action.

In the two years since the New York Times ad, the Berlin Wall of prohibition has only continued to crumble. Today, twenty-five states have some type of legal medical cannabis, a total that could climb after the November 2016 election. In several states, most notably California, voters will also have the opportunity to weigh in on ballot measures that could legalise recreational cannabis for adult consumption. 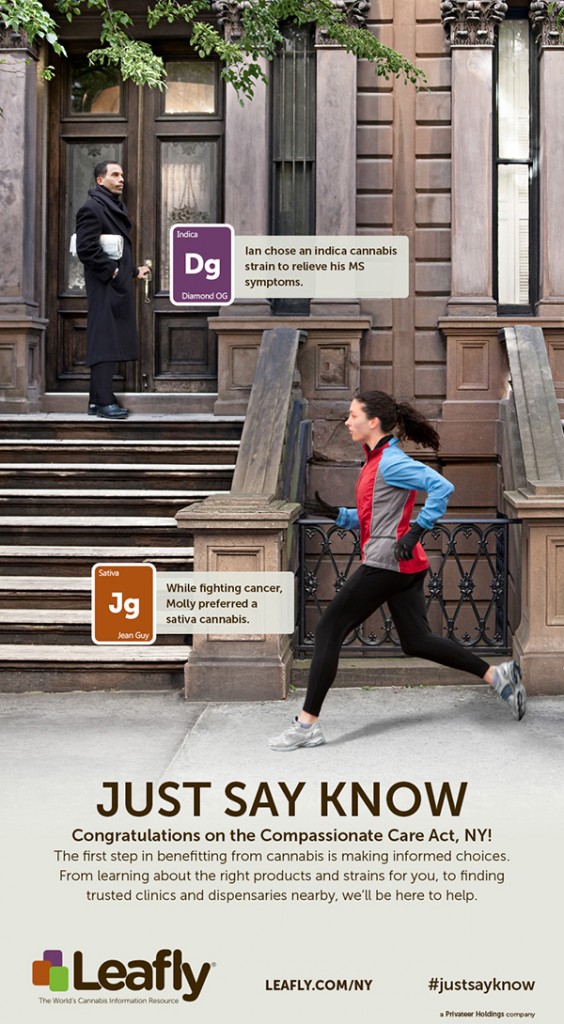 The original advert posted in the New York Times (Leafly)

Meanwhile, reform is taking place internationally as well. Countries like Germany and Australia are taking active steps to introduce federal medical cannabis programs. And in Canada, the government plans to legalise recreational cannabis by early next year. They will be the first G7 nation to do so.

All of these changes, domestic and international, large and small, chip away at the misconceptions and prejudice that undergird cannabis prohibition, making further reform all the more likely. More work is still to be done; even in jurisdictions where cannabis is legal, far too many patients have insufficient access to the treatments they need. But progress is more possible when the dismissive attitudes and misperceptions once associated with the cannabis conversation are replaced with measured language characterised by compassion, understanding, and scientific evidence.

The two years since the New York Times ad have also seen tremendous growth at Leafly. The Leafly team is now comprised of more than 70 top-notch talents in an ever-widening variety of roles, all committed to educating patients and consumers about cannabis. In the past few months alone, Leafly has moved into its new headquarters in Seattle’s Pioneer Square; published original reporting from around the world; launched a smash-hit international comedy tour; and debuted its first-ever consumer-facing physical presence, an interactive educational resource and lounge, in Portland. More exciting developments are on the horizon.

A lot has changed since August 2014, but the belief that inspired Leafly’s historic New York Times ad remains the same. As laws and attitudes continue to evolve, we remain optimistic about the future of cannabis reform and are excited to help shape that conversation.

Leafly are co-sponsors of The Trinity Summit global medical cannabis summit being held on 14th September in Dublin, hosted by VolteFace.

What a ‘Night Czar’ Can Do To Help Nightlife Survive

Marching Towards Medical Cannabis in Ireland