I’m Declan, a final year pharmacology student at The University of Manchester. I’m writing this blog post to highlight the charity work going on in the UK right now, and how students can contribute to harm reduction work today.

Since I’ve arrived in Manchester, I’ve started working with The Loop, a not-for-profit community interest group that provides integrated drug, alcohol and sexual health information and advice. The Loop plays a big role in the fast growing scene of forensic testing at festivals and nightclubs in the UK, and provides integrated welfare support at events across the UK and Europe.

Last Friday I worked a forensic drug testing shift with The Loop. I’ve worked them a few times before, helping out by taking surveys, handing out free water and offering advice to minimise drug-related harm at the Warehouse Project – a popular club night – in 1st year and conducting forensic testing of confiscated drugs at Parklife festival in 2nd year. With my background in pharmacology, I continue to help out as part of a multi-specialist team by testing the contents of illegal drugs.

The rationale behind The Loop’s drug harm reduction work is simple. Whilst no illegal drug is safe to take, there are basic precautions which patrons at club nights and festivals can be armed with to reduce drug-related harm. We do not necessarily endorse drug use, but simply try to protect those who have decided to take them (regardless of the legal consequences). The Loop is staffed by specialists from a range of areas: on Friday, for example, I was working alongside multiple post-doctorate chemists, criminologists and a range of trained drug, alcohol and sexual health specialists and volunteers. 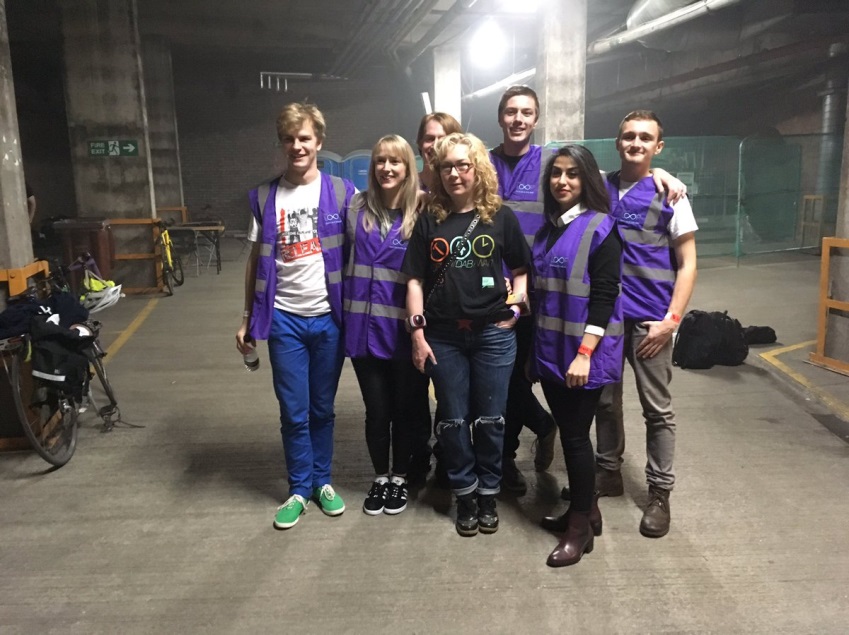 The integrated service The Loop provides relies on a well-connected network of drug and alcohol experts from around the UK and Europe. The training sessions are a testament to this – people from all over the country meet in Manchester to see what their groups and combined skillsets have to offer the team. On this particular night we had a few scientists over from Finland visiting to get an idea of how we operate, and The Guardian had also sent journalists to film some of our testing processes and discuss the rising strength of ecstasy pills in the UK (an issue The Loop has helped introduce into public discussion). Between the onlookers and half a dozen or so testers, our little forensics gazebo in a back room of The Warehouse Project was fit to burst.

We spent the evening testing drugs dating right back to the start of this years clubbing season, from the whole range of nights hosted at The Warehouse Project. There is also a welfare arm of The Loop working here, dedicated to helping out those in a bad state, offering general advice, trip-sitting or just having a chat with patrons. Their aim here is to offer a friendly face in the club for anybody requiring help with nasty drug experiences or just general advice. In addition, surveys carried out by these welfare volunteers contribute to research by Fiona Measham, co-founder and Director of The Loop and Professor of Criminology at Durham University.

Back in our forensics tent, we ran a series of tests to determine the contents of different drugs. Our primary screening technique was infrared spectroscopy. Here, we shined infrared light at a drug sample, measuring the frequencies of light which were reflected. This produces a unique spectrum readout, almost like a fingerprint, which can be compared to a database of emission spectra for pure samples, measured in labs across the world. As a preliminary technique, this tells us what a sample “looks like” on first inspection, with some insight into what else it may contain. This qualitative step can tell us what a sample is mostly comprised of, for example, a pill containing mostly MDMA compared to a pill which contains mostly PMA (a dangerous substitute often missold as MDMA).

A large focus of The Loop’s forensic testing in Manchester is focused on finding out what range of ecstasy pills are circulating in the UK. This country has the highest rates of MDMA use in Europe, so calling out dangerous ‘branded’ pills to ensure users are aware of their reputation presents a smart public health move. A good example of this comes in the form of the red ‘Superman’ pills that circulated in 2014 and 2015. When they were tested in the Netherlands, these pills were shown to contain high levels of PMMA. Many users had reported severe reactions to this pill, and after hearing about the contents from Dutch testers, The Loop and the Warehouse Project coordinated the UK’s first alert about these pills on social media, ensuring as many people as possible were aware of the contents of this particular pill which had been largely mis-sold as ecstasy. Four UK users died after taking this dangerous pill, and there might have been many more were in not for the coordinated efforts of the Loop and the Warehouse Project. 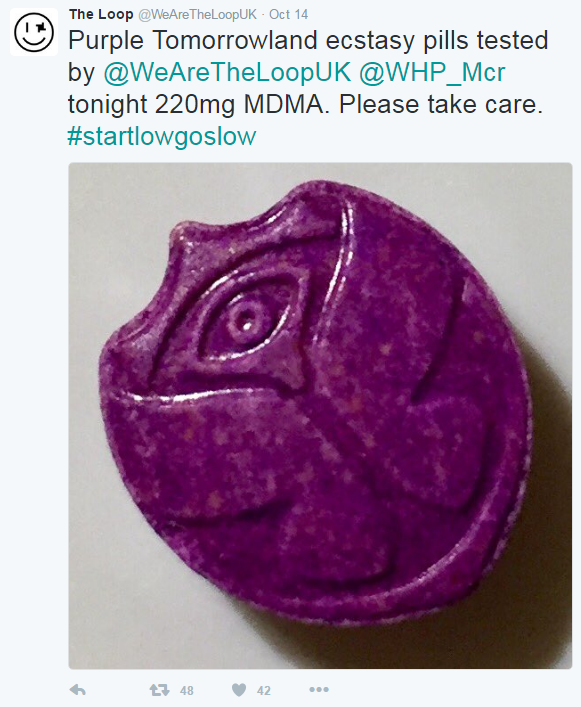 Another focus of The Loop today is studying the rise of very high dose ecstasy pills. In the 90s, the average ecstasy pill usually contained 80-120 mg MDMA and by the late 2000s it had fallen to under 30mg. The current average is about five times stronger than five years ago with many pills in Europe over the last two years being found to contain more than 250 mg MDMA. Overdosing on high strength pills is the cause of a large proportion of ecstasy-related deaths, with annual ecstasy-related deaths rising to 57 in 2015, and again this is a risk factor The Loop endeavours to inform the public on.

Friday evening, we conducted a secondary test on a specific pill we suspected to be very strong: a large purple pill with the Tomorrowland logo imprinted on one side. Using a solvent to wash out the MDMA contents, the remaining contents of the pill can be weighed to determine how much MDMA was in the tablet with about 5-10% accuracy. Testing indicated that the purple Tomorrowland pill contained roughly 220 mg MDMA. This is a surprisingly common finding, and one that a lot of clubbers have a good knowledge of. Some of the yellow UPS pills circulating in 2015 were shown to contain about 275 mg MDMA, and this logo since developed a reputation which other groups have sought to copy.

Similar testing has shown that crystal MDMA at festivals (including Parklife in Manchester) is often greater than 83% purity. This is especially problematic since crystal MDMA is notoriously difficult to dose. This form of MDMA is shown to be one of the most popular party drugs in the UK among club and festival goers, and its purity can fluctuate widely, leaving some users uncertain of the amount they should take. This has spurred The Loop’s current public information campaign: “Crush, Dab, Wait” is the advice issued to crystal MDMA users to moderate intake. Crushing the crystals to a fine powder, licking the fingertip and dabbing the powder ensures only a small amount (usually 70-100 mg) is consumed, and waiting 1-2 hours allows for the effects to take hold before considering taking any more (this is another hugely important message to get across).

As a multifaceted harm reduction group, The Loop has spread its reach all over the UK and even across Europe in recent years. In the summer of 2016, front-of-house testing was conducted at two festivals in the UK. This means that festival patrons could have a portion of their drugs tested and hear the results directly from experienced drugs workers as part of an individually tailored harm reduction package, the rest remaining with them. This is the first time this has happened in the UK, and with support from local councils and the police, this practise will continue to spread – many more festivals are expected to employ this strategy at their events in the coming summer. This change represents a general shift in opinion on evidence-based drug policy in the UK. 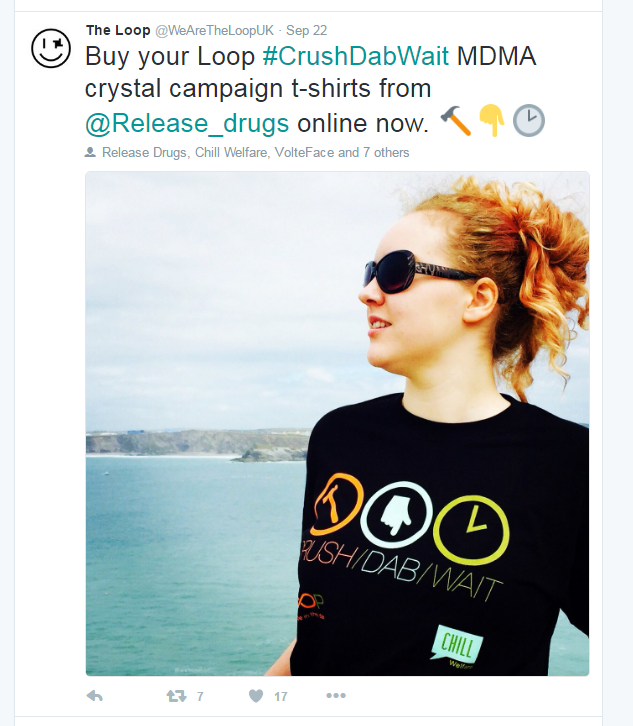 Getting the opportunity to work with such an important group has shaped my university experience hugely. I think there’s nothing better to do at university than to get involved in something you’re passionate about, and working with The Loop has helped me to do this whilst applying knowledge from my studies. I’ve met other passionate people from different walks of life, socialised in a vibrant growing academic scene and learnt new theories and techniques outside of my course.

I could go on for days about the good work being done by The Loop. If you would like to hear more or discuss, please feel free to contact me on declan.manning94@gmail.com. For more information on The Loop, do visit our website or contact us at info@wearetheloop.org.

High as a Kite (Behind Bars)