Fiona Measham knows her way around a soundbite.  “You can’t close the stable door after the horse has bolted,” she replies when I ask if we’re seeing a tentative shift in UK attitudes to drug harm reduction policies.

Fiona is co-founder of The Loop. Last year The Loop hit the headlines when, supported by drugs policy reform charity Transform, they conducted drug testing at Secret Garden Party and Kendal Calling festivals. It was a move feted worldwide and, though some of the shine of it was taken off by the closure (and subsequent reopening) of Fabric in the wake of two tragic MDMA-related deaths, it felt like a little victory in the war against the war on drugs. 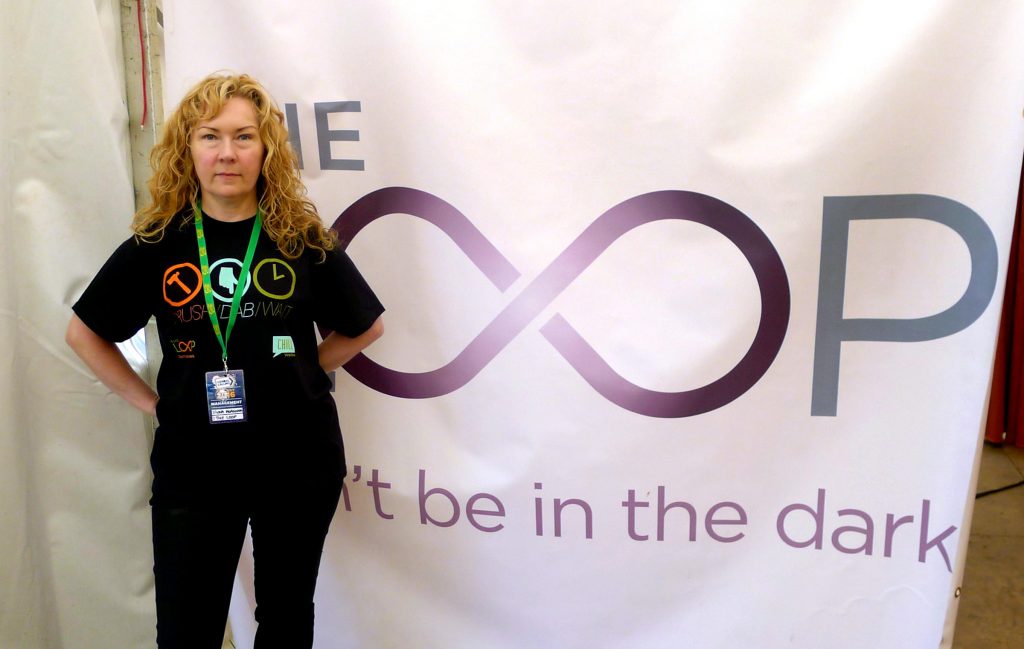 Today The Loop has helped organise the first International Drugs Checking Day to help raise awareness of the importance of being aware of the contents and strength of your drugs.

It’s another facet of Fiona’s relentless schedule; since last summer she’s been chin deep in meetings with local authorities, the police, festivals, nightclubs and public health authorities as she tries to convince them all that rolling out drug-testing nationwide is the logical next step.  Spend half hour in her company and you’re subjected to a scattergun of narcotic information and facts, much of which she freely admits is well-honed and rehearsed after months of meetings in which she metronomically bestows the virtues of The Loop’s drug-testing.

“The biggest change between 2016 and 2017, is that the debate has now shifted,” she says. “It used to be, ‘Why do it?’ Now it’s, ‘Why not do it?’  There still some discussion about whether it’s legal [to do the testing].  We think it is and we can answer that question. Once people hear our reasoning, they’re fine with it,” she says. “The other concern we’re facing is whether harm reduction services do more harm than good; will our presence somehow stimulate or encourage drug use?”

Their findings were that this was not so, and that the party-focused mind-set of the festival hedonist worked in their favour. “A festival is quite a specific situation. People have already bought the drugs. They’ve got the past security. They’re obviously planning to use them.  We never endorse or encourage them to take the drugs, so our information is going to be received neutrally or it’s going to deter them.”

In a country with a Prime Minister who, in the words of Nick Clegg, ‘filleted’ his proposal for a progressive drug policy review in 2014, one might speculate that her hardest job is to convince the agents of the law. Not so. “The police are more concerned with enhancing public safety, protecting the public and reducing crime, and they normally realise we’re offering a pragmatic response to a tricky situation.”

It’s an attitude I encountered when reporting on the testing at last year’s Secret Garden Party. Laura Hunt, Silver Commander of Cambridgeshire Police, was a key cog in getting the testing approved and told me at the time:

“If you’re safeguarding people that render themselves vulnerable because of their possible use of drink or drugs, then why wouldn’t you? Why wouldn’t I agree with something that might help stop a loss of life?”

The results at Secret Garden Party spoke for themselves. Over 250 samples were tested across the weekend. One in five were handed back to Fiona and her boundlessly enthusiastic team of testers and volunteers, many of them post-doctorate chemists.  Amongst the narcotic flotsam and jetsam they found pills that were 100% concrete (and, unsurprisingly, hard as rocks), crushed up malaria tablets parading as ketamine, and had the opportunity to repeatedly pass on information regarding the strength of the tested MDMA. She regards the latter as a vital part of their remit;  hardly surprising when you consider Britain is currently is awash with high strength ecstasy, much of it between 130-150mg per pill and largely responsible for the 57 ecstasy deaths that occurred in the UK 2015. It was, as they say, a no-brainer.

So if she can normally get police onside, what of public health? 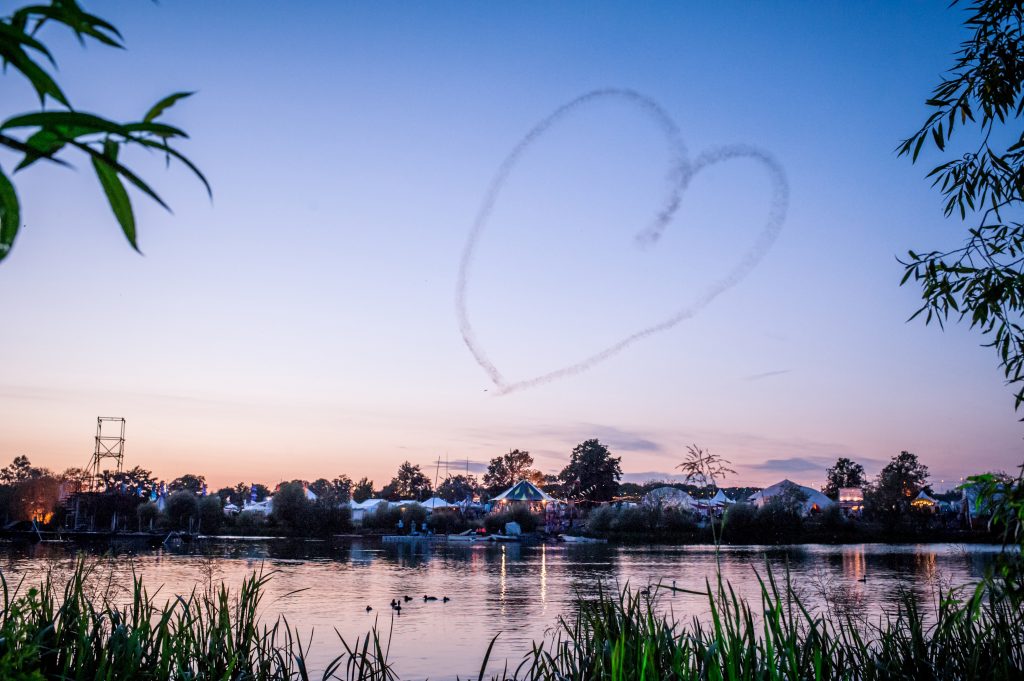 Last year, in the face of a -record 3,674 drug-related deaths, both the Royal Society For Public Health and the Faculty Of Public Health came out in favour of decriminalising the use and possession of all drugs. “We’ve got an interesting situation with public health in that they can’t be seen to be endorsing intervention with such a small evidence base [last year’s two pilot schemes at Secret Garden Party and Kendal Calling], but it’s only through our intervention that they can get an evidence base.” Fiona diplomatically terms their current stance as “detached neutrality.” You or I might call it a stand-off, but she’s hopeful and pleased with the direction with progress thus far.

Adam Winstock, founder of the Global Drug Survey, has repeatedly come out in support of a harm reduction-focused approach, and in the wake of Fabric having its license reinstated wrote an article for Mixmag which called for the end of a “zero tolerance” approach and instead a move to that of “zero harm”. Amongst other things he advocated harm reduction advice offered on nightclub websites, and staff specially trained in dealing with alcohol and drug intoxication (which, for what it’s worth, is the norm in Berlin which has the most advanced dance music culture on the planet).

“The reality remains that in most countries, promoters and venues are discouraged from talking about drug use and even acknowledging its presence could bring premature closure. This means that while dance venues, event promoters and their websites probably represent some of the best hubs to educate people about how to use drugs safely – none are permitted to have these discussions for fear of closure.”

A quote like this highlights the nefarious difficulties in dealing with the issue.

Whether Theresa May likes it or not, drugs have always been an intrinsic part of subculture. Whether it was the hippies smoking weed, the mods taking speed or the Hacienda astronauts popping pills like Cherry Drops, an altered state allowed the progenitors and the disciples of these scenes to engage with and enjoy their chosen artform with an abandon that cold sobriety would simply not allow.  Of course these subcultures, and many before and since, have gone steadfastly overground and people are still taking drugs- 8.4% of the UK adult population according to 2016 statistics.  But still no-one’s allowed to bloody talk about how to stop people hurting themselves whilst doing so. Until now, it seems.

“We’re very busy with nightclubs at the moment and are in discussions with a club in Ibiza so i hope that it won’t just be constrained to the UK. Those are medium term plans,” Fiona says.

She does admit, however, a little more reticence as to how her drugs testing testing will go down in the non-festival environment. “There’s pros and cons to delivering our service within a club.  it depends how big the club is, if people are going elsewhere afterwards. if they’ve already taken drugs before they’ve got in.”  She’s right. If you’ve drank 5 beers and dropped half a pill,  you’re hardly likely to be of the mind to survive the treachery of a rain-swept queue, then spend half hour getting your gear tested whilst your mates get cuddly on the dance floor to Love Is The Message. 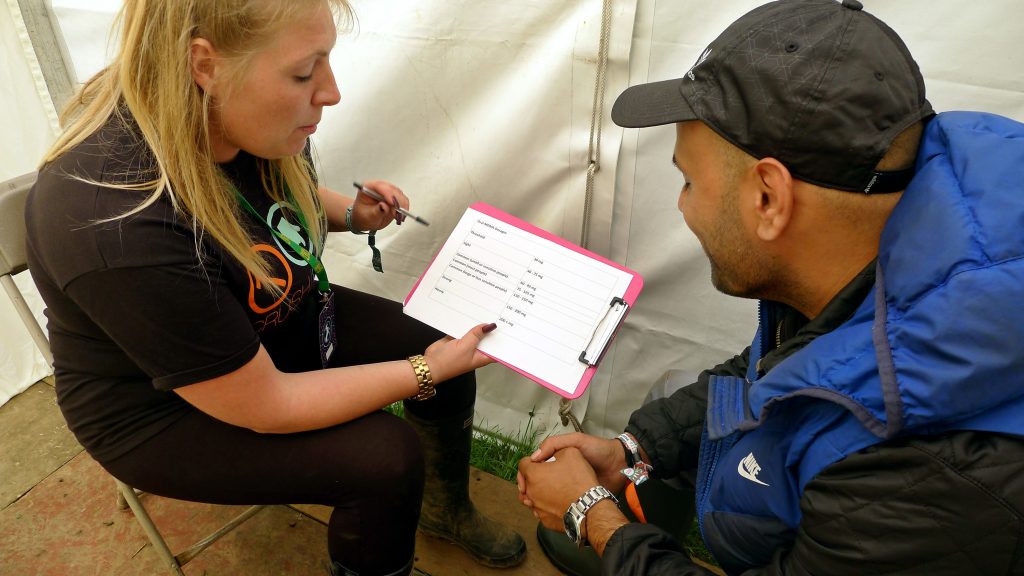 An alternative option is city centre testing, which they’re going to trial in Preston next month. (Note it’s not one of the big cities: hardly surprising with all the extra layers of bureaucracy to navigate in a place like London.) Another option is to share other drugs services. She points to the example of Copenhagen, which last year opened the world’s largest, multi-million Euro consumption room. They are just starting to offer drug testing, and it’s another step forward down the track of harm reduction. “It will be massive in terms of keeping abreast of what’s circulating, you’d know if there’s any contaminants around, or dodgy batches.”

Like everything she says, it’s all laced with a sense of quiet hope, and she can look to the past for inspiration:

“Britain has got a long standing history of radical, local harm reduction initiatives. We had some of the very first needle exchange schemes in the whole world, and from the 1980s onwards we were leading the way with harm reduction in relation to HIV and AIDS.”

It seems she is very much keeping that spirit alive.

Get all the information on International Drugs Checking Day here

David Hillier is a freelance journalist. He has written for The Guardian, Vice, Fest300, Sabotage Times and more. Tweets: @Gobshout