This was republished with permission from Dr Will Haydock’s blog, Thinking to some purpose.

Lately I’ve been thinking a lot about stigma and words relating to substance use. Carl Hart recently wrote a piece arguing that understanding ‘addiction’ as a ‘brain disease’ contributes to social injustice, and when NACOA recently launched a manifesto for ‘children of alcoholics’, the write-up by Alcohol Policy UK got me wondering about that much debated word ‘alcoholic’.

Stigma is often cited as a reason to introduce drug reform. It might be unfair, but sometimes I get the feeling – as Julian Buchanan suggests in that post I just linked to – that some reformers think stigma itself would be undermined by legalisation. I think, aside from ignoring the experience of alcohol and ‘alcoholism’ in particular, this misunderstands what stigma is and where it comes from.

Plenty of research on drinking – including my own – suggests that there is huge stigma around certain forms of drinking behaviour, both amongst drinkers and policymakers (local as well as national), even though (or perhaps because) alcohol is legal.

I used to think (when I was working solely on alcohol policy) that it was the legal status of alcohol that brought out particularly odd, self-deluding arguments, as we each try to contort our reasoning to claim that it’s not our own drinking that’s problematic, but someone else’s. We can’t condemn people for drinking per se, so we have to look for something else to dislike. So if the government says drinking 14 (or even 21) units a week is a bad idea, we counter by pointing out that we haven’t caused any nuisance or engaged in any crime, unlike some people, and we spread out our units across the whole week. But others would use precisely the same definition to argue that, even though they drink pretty heavily on one night of the week, they’re not drinking that much per night on average, and they certainly don’t drink every day, which would be a sign of a problem.

It’s true, this feels odd, and I got tired during my research of hearing people say that they didn’t drink to get drunk, but noting that this did – just coincidentally, obviously – happen when they went out with their friends. I think at some level I felt this was dishonest: if you don’t drink to get drunk, but engage in the same practice almost every Friday night, and it always happens when you do, then surely you do intend to get drunk at some level? And what’s wrong with admitting this? 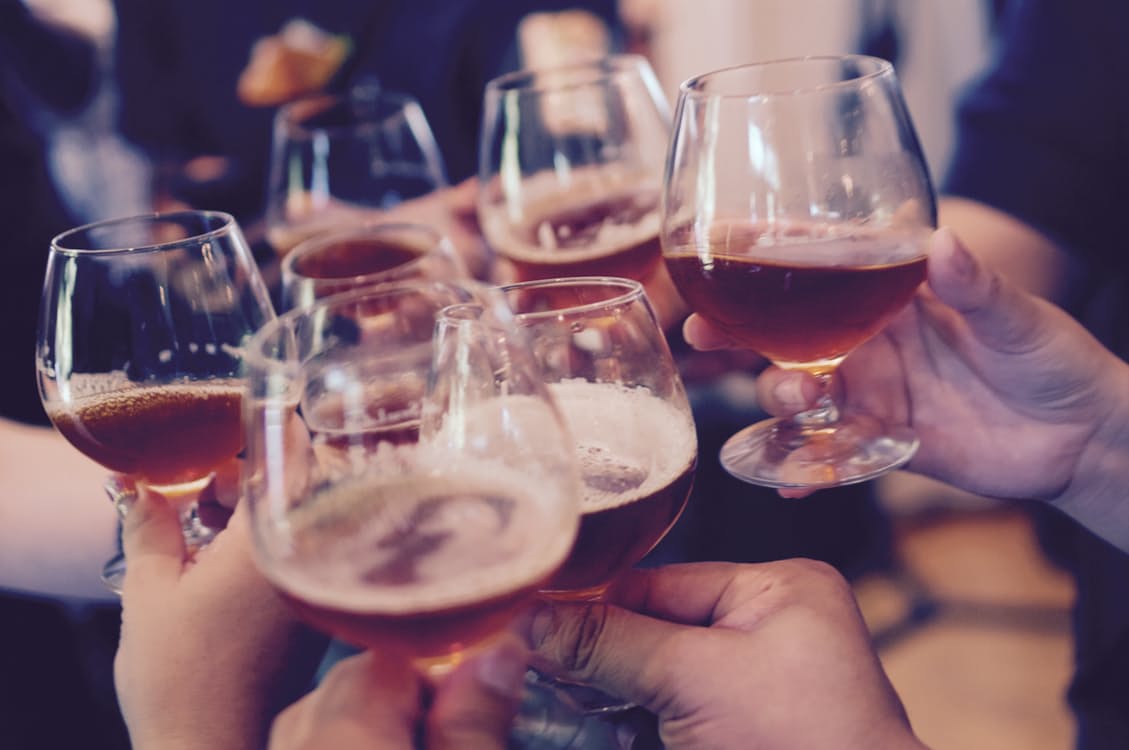 But actually, having looked at drug policy, I can see this in a different light as somehow more open and honest.  Government and drinkers alike don’t actually condemn physiological intoxication, except where it relates to your ability to drive a car.  How could they, given this is seen as an inherent property of alcohol, which is legal?

(In fact, they could quite easily: through our weird attitude to ‘rationality’ and laws such as serving people who are drunk, drunk and incapable, etc. But let’s set that aside for just a moment.)

When people deny that a certain level of consumption is problematic in itself, and that really we should care about behaviour and the setting of this, they are quite honestly getting to the heart of the matter. It’s perfectly honest to say what’s actually a problem is violence, or disorder, or even simply being immodest. What would actually be dishonest for most drinkers would be to suggest they’re offended by some ‘inherent’ or ‘objective’ property of a substance, or intoxication in itself.

But that’s precisely the basis of much drug policy debate: not just that drugs are ‘dangerous’ but that they are somehow morally questionable in themselves.

We like simple arguments: x causes y. Famously, we’re not good at understanding the idea of risk and uncertainty, let alone accurately judging it and responding accordingly.  This is why debates about alcohol guidelines get lost in the mire of whether there is a J-curve of risk, and reports suggesting one way of dealing with harm related to cannabis get sucked into a fruitless debate of whether cannabis can ever be harmful at all, even when both sides are deliberately trying to avoid it. (I was going to link to another thread on Twitter at this point, but I see it’s been somehow deleted – certainly not by me!)

And so we like the idea that we can define ‘drugs’ in general – or even specific substances – as dangerous (or not), or at least on a spectrum. And Public Health campaigners like the idea that alcohol is inherently problematic: it’s no ordinary commodity and there’s ‘no safe level’ of consumption.

I appreciate that these are partly campaigning tactics: it’s easier to state that something is inherently ‘bad’ rather than look at nuances of social and cultural context – drug, set, and setting, to use some out-of-date terminology.

But the reality is unquestionably more complex.  There simply aren’t ever fixed, objective characteristics of a substance in any way that’s relevant for policymaking – and I don’t just mean the panic around crack cocaine that Carl Hart (amongst others) has so clearly debunked.

This is where the idea of alcoholism or addiction as brain disease is relevant. Carl Hart, as I mentioned, sees this concept as perpetuating social injustice. The point is that according to this theory, the fundamental issues of ‘addiction’ are due to how a chemical interacts with the brain.  This is understood as a (not very) simple ‘fact’ of neuroscience.

If that’s how addiction is understood – or what it’s reduced to – then as Hart points out, this means the issue (and therefore the ‘solution’) either lies with the substance or the brain.

For the past century, we’ve tended to see the solution regarding alcohol as being to address the brain. Or, rather, the specific brains that have a problem with alcohol. This is still the dominant view of addiction or alcoholism today. We talk about certain people as having ‘addictive personalities’, and most people’s view of alcohol would be that controlled (or ‘responsible’) drinking is possible – but not for everyone. ‘Alcoholics’ are effectively defined as the people who can’t simply have ‘one or two’ drinks. As Mark Gilman puts it, some people ‘have the spots’.

But for ‘drugs’, we’ve tended to take the opposite position: that the danger is in the substance itself, not just that certain people are susceptible. That’s certainly a good rationale for keeping drugs illegal: if one hit of heroin, crack or methamphetamine can lead to addiction (and sensible, well-educated, scientific people have insisted on this when I’ve suggested otherwise), who would allow people to buy and consume it?

But the crucial word there is ‘can’. Even if it were true, it surely wouldn’t apply to everyone. But as soon as we admit this, we have to think in shades of grey, rather than black and white, unless we simply fall back on the idea that some people ‘have the spots’.

Now this blog is really here as a way for me to write what I ‘reckon’, without having my argument fully formed or evidenced as I’d need in a professional or academic context. And as I thought – reckoned – about this idea of addiction-as-brain-disease, another currently popular idea came to mind: that policy regarding a range of substances is converging. Virginia Berridge most notably, but also Mark Monaghan and Henry Yeomans (this is the paper I’m thinking of), have written persuasively about how several jurisdictions seem to be categorising substances like cannabis and tobacco in similar ways – legal, but highly regulated – and this is related to a convergence in how we think about them: as legitimate consumption choices, but with some risks attached that merit the state getting involved.

It’s easy to attack someone on the simple basis that they use a particular ‘drug’, if the use of that substance is somehow inherently ‘wrong’. However, if this convergence thesis is accurate, and we are increasingly seeing caffeine, nicotine and alcohol and other substances as ‘drugs’ in some sense, it becomes harder to maintain that simple but comforting fiction that ‘drugs are bad’ (mkay).

And bearing in mind our tendency to like clear arguments and positions, if it’s not the substance that is the source of the problem – an assumption which can’t be so easily sustained if ‘we’ use ‘drugs’ like caffeine and alcohol too – it must be the person; the ‘addict’ with a ‘diseased’ brain.  These substances don’t cause everyone problems, so we should look out for the specific people who are likely to find them difficult to manage, probably due to some genetic predisposition.

This is remarkably similar to the idea of condemning young drinkers who don’t know their limits, rather than identifying alcohol or licensing policy as the issue. (I’m not saying one of these is wrong or right; just pointing out that they’re different analytical approaches that lead to different policy ‘solutions’.)

And in both cases, whether relating to ‘drugs’ or alcohol, as Carl Hart suggests, we could do with a bit more social context to understand why some people are more likely to face problems than others.  Might this have something to do with wider social factors like housing, employment and wealth?

This is a potent reminder that policy ‘convergence’ and the call of ‘legalise and regulate’ won’t address stigma, which comes from somewhere deeper. In fact, as the stigma surrounding particular substances reduces, you might even argue that the stigma attached to individual ‘flawed consumers’ could increase, as they bear the blame for running into problems or consuming them in the ‘wrong’ way, rather than being able to blame the substance itself.

The bigger task, then, is to try to inspire more nuanced thinking, as Carl Hart suggests, that moves beyond seeing problems as either the result of a ‘drug’ or an ‘addicted brain’, and looks at both of those in the wider context of the society we live in. I hope this blog contributes something at least to that idea.

Dr Will Haydock is a Visiting Fellow in the Faculty of Health and Social Sciences at Bournemouth University, Senior Health Programme Advisor for Public Health Dorset, and writes regularly on drug and alcohol use on his blog Thinking to some purpose. Tweets @WilliamHaydock