Why Vaping Weed Is Healthier Than Smoking It, According To Science

This article originally appeared on KINDLAND.

For most of us, pleasure drives drug use. But regardless of whether it’s pleasure you seek, or therapeutic relief and treatment, typically the benefits come with a cost: some risk of harm or compromise of personal health and safety. And though doctors and scientists are increasingly coming to the conclusion that cannabis is often a safer alternative to opioids, for instance, marijuana is no exception. Whether you use herbal cannabis, oil or resin, and whether you use it medically or recreationally – but particularly for patients – the biggest risk of smoking weed is the smoke itself.

Spoiler alert: science has a happy ending for this story…

Combustion, not the cannabis itself, is the culprit. Cannabis smoke contains the same kind of cancer-causing chemicals as cigarette smoke. Unlike with cigarette smoking, however, researchers aren’t linking marijuana smoking with increased cancer risk: according to Donald P. Tashkin, MD, emeritus professor of medicine at UCLA’s David Geffen School of Medicine (via HuffPo): “Findings from a limited number of well-designed epidemiological studies do not suggest an increased risk for the development of either lung or upper airway cancer from light or moderate use.” And even heavy use has “far lower risks for pulmonary complications” than tobacco use, Tashkin said.

Can we have our cake and eat it too? Science says (kinda) yes, and the answer could literally be right under your nose.

But marijuana smoking does “cause visible and microscopic injury to the large airways that is consistently associated with an increased likelihood of symptoms of chronic bronchitis that subside after cessation of use,” according to Tashkin.

Vaping seems to reduce the harmful lung effects of smoking.

This is a big deal, since the biggest risk of smoking weed is the smoke itself.

“People who vaporize report decreased respiratory symptoms” compared to those who smoke weed, according to Marilyn Huestis (to BuzzFeed News), chief of chemistry and drug metabolism at the National Institute on Drug Abuse, who has studied the physiological effects of vaping marijuana.

Unlike a joint or bong, vaporizers heat cannabis to temperatures that release cannabinoids – the good stuff secreted by cannabis flowers that get you high and provide relief to an array of symptoms including pain, nausea, anxiety, and inflammation—in a fine mist without creating the toxins associated with combustion.

“It was the product we wanted in our lives,” Mark Williams, a former Apple developer and CEO of vaporization technology company Firefly said in a statement provided to KINDLAND.

“Firefly was designed around the plant,” Rachel Dugas, who oversees Firefly’s marketing efforts, told KINDLAND. “And the dynamic convection heating creates something we call the ‘whole plant experience.’”

According to Dugas, the dynamic convection heating technology “only vaporizes the contents of the bowl as [the user] inhales,” to cut down on wasted plant materials. And that, “vapor is created at a range of temperatures, which means [the user] is able to capture more active ingredients in the plant than they would with other vaporizers where certain terpenes and ingredients would have already been vaporized and denatured before they even inhale,” she said.

“Because nothing is burned, it does not produce the same toxic byproducts that smoking does,” Dugas told KINDLAND.

Cannabis Before and After Vaporization:

Above Left: Macrophoto of cannabis sample prior to vaporization showing trichomes with resin;
Above Right: Macrophoto after several passages of hot air from the vaporizer. The resin has disappeared, and trichomes have withered, but non-incinerated fibrous material remains (Images via CA Normal).

The result is that “respiratory symptoms like cough, phlegm, and tightness in the chest… are less severe among users of a vaporizer,” according to Dr. Mitch Earlywine, a drug researcher and Professor of Psychology at the State University of New York at Albany.

The relative positive impact of using a vaporizer has also been shown to be larger as the amount of cannabis used increases. According to the study’s authors, “regular users of joints, blunts, pipes, and water pipes might decrease respiratory symptoms by switching to a vaporizer.”

Safer use can also be more enjoyable use.

The results seem to suggest that safer drug use can be more enjoyable drug use: of 10 harm-reduction factors identified and rated by 38,000 cannabis users in the survey, ‘Use Vaporizer’ came out on top in importance in reducing risk. Moreover, 57% of these respondents said using a vaporizer also improved their “cannabis-related pleasure.” 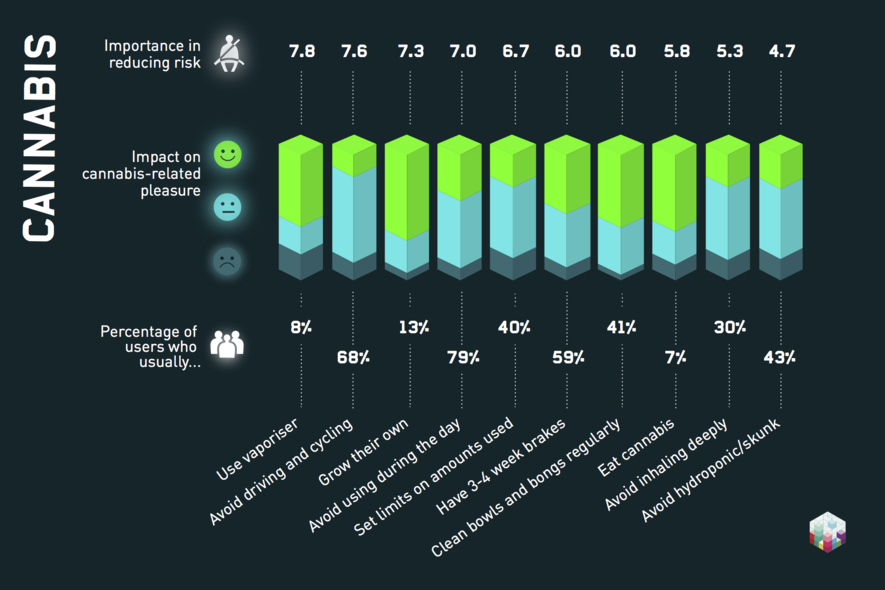 From the Highway Code:

“Smoking cannabis is the most dangerous way of using it. Burning cannabis is the thing that releases tar and cancer causing chemicals. Unlike a joint or bong, a vaporiser heats cannabis to below its combustion temperature to produce a vapour. This means that the THC is released but the smoke containing tar and toxins is significantly reduced. Whilst the evidence is not conclusive, it is likely that vaporisers reduce the risk to your lungs. It is also likely that some types of vaporisers are better than others in protecting your health.” 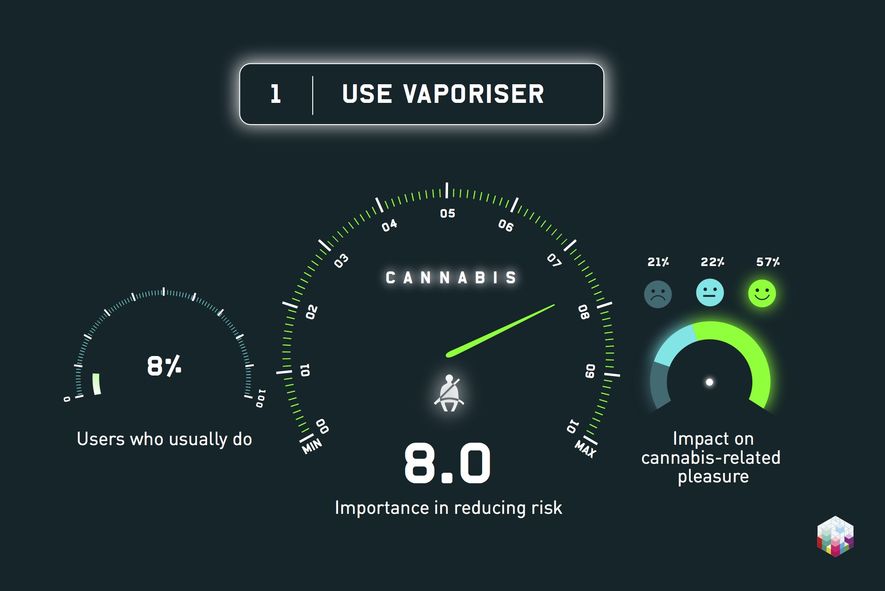 Another 2016 study conducted via online survey by a team of Dartmouth researchers, “Characterizing Vaporizer Use Among Cannabis Users” concluded:

“Those that preferred vaping reported it to be healthier, better tasting, produced better effects, and more satisfying.”

Certainly, vaping has emerged as less of a trend and more of a consciously arrived-at-decision for the new school of cannabis consumers, and lifelong weed users who seek a cleaner high.

With this in mind, Firefly‘s Williams says educating consumers of the vape-method is one of his company’s most pressing challenges: “It’s a bit of a complex topic, but it is crucial to understand.”

Firefly’s Dugas concurs with these claims, and refers to vaping as “mindful” consumption.

“Because of the way that [the device] works you are forced to pay more attention to your breath, which is one of the main tools for guided meditation,” Dugas said to KINDLAND. “This puts you into the perfect mindset for being present and enjoying your vape sesh to the fullest.”

With both the health advantage, and the user experience, the vaporizer itself matters a lot. While a sub-par vaporizer will fall short in at least one category, the best vaporizers can deliver enhanced experiences with significantly reduced side effects to smoking.

Vaporization, by the numbers:

According to a study conducted by California NORML and MAPS (Multidisciplinary Association for Psychedelic Studies), vaporizers convert approximately 46 percent of available THC into vapor, whereas the average joint converts less than 25 percent of THC into smoke. That means both more bang for your buck, and a better, cleaner high. Comparing cannabis vapor to smoke, the study found the vapors to “consist overwhelmingly of THC, the major active component in marijuana, whereas the combusted smoke contained over 100 other chemicals, including several polynuclear aromatic hydrocarbons (PAHs), carcinogenic toxins that are common in tobacco smoke.”

In a 2007 study by University of California San Francisco researchers (‘Smokeless Cannabis Delivery Device Found Efficient and Less Toxic’), “patients rated the ‘high’ they experienced from both smoking and vaporization and there was no difference between the two methods by patient self-report of the effect, according to study findings.” In addition, patients were asked which method they preferred: “By a significant majority, patients preferred vaporization to smoking, choosing the route of delivery with the fewest side effects and greatest efficiency.”

This story was originally published on KINDLAND.