The findings of the 2017 Global Drugs Survey were released this week, which gathered data from 115,000 people around the world. Although, by looking at the demographics (and additionally considering that taking the survey requires having Internet access), we can see that this by no means represents the experiences of all drug users, worldwide, the results provide many interesting insights into drug use and the differences between different types of drugs.

We spoke to Dr. Adam Winstock of the Global Survey about some of the interesting findings this year:

1. People who want cannabis to be legal don’t want it to be sold by the government

Only 17% of people would like to see the government being the vendor in a regulated cannabis market, with 45% preferring private companies and 38% preferring not-for-profits.

Interesting on how to regulate legal cannabis sales from @GlobalDrugSurvy – but options not mutually exclusive – could operate in parallel pic.twitter.com/fQQGC2RdEm

Despite higher purity cocaine being more widely available, there has been a doubling of the number of UK cocaine users being admitted to A&E in the last two years. Dr. Winstock believes that the most important takeaway from this is that we need to change the way we talk about drugs and open up discussion with drug users.

“In terms of big trends I think the increase in many countries in the purity and quality of drugs like cocaine and MDMA are placing more people at risk. It’s simply not true that better quality drugs are safer. They could be if people were better informed about what they were using and educated more practically about safer ways of using.”

As opposed to cocaine, the figures for people seeking emergency medical treatment after taking MDMA or ecstasy in the UK actually dropped from 1.2% last year to 0.8% this year (despite the total worldwide going up). 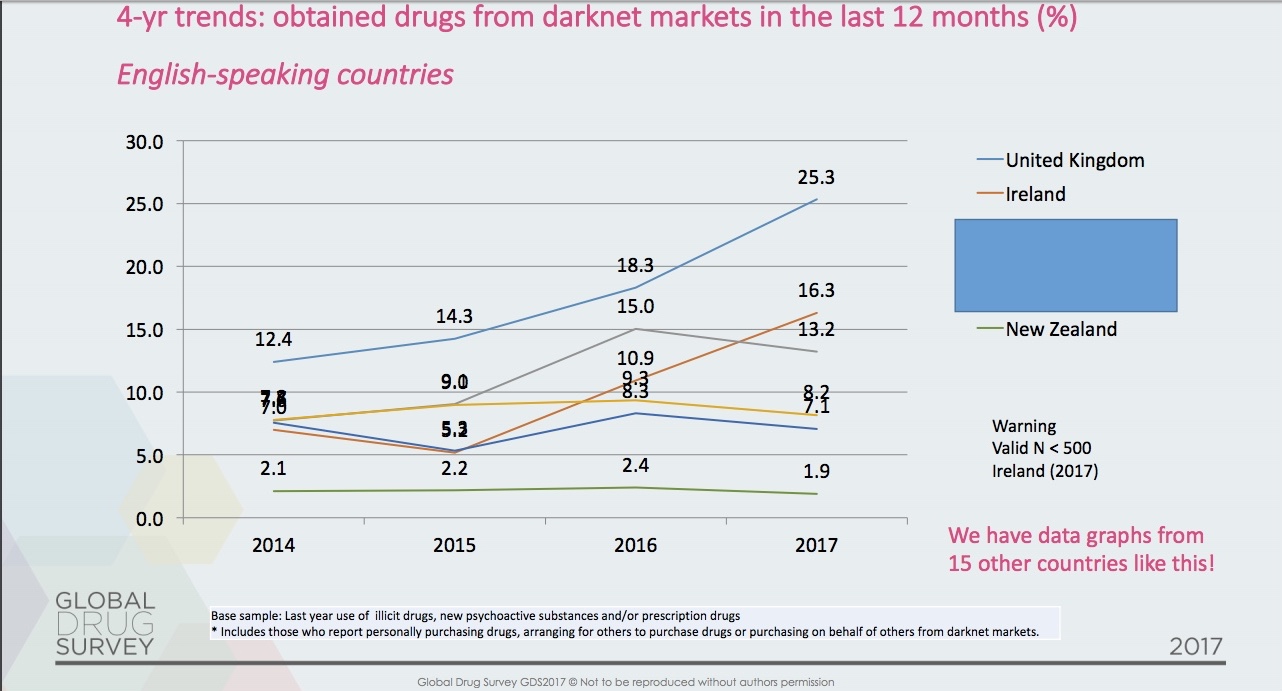 The Global Drug Survey has been covering cryptomarkets since 2012. 63,212 respondents completed the darknet market section of the survey this year, all of whom reported using drugs in the last year. Despite the FBI seizing the servers of the well known Silk Road marketplace, dark web drug sales are more popular than ever. The rate at which drug users in the UK are buying their drugs on the darknet has doubled since 2014. Although user reviews can be beneficial for people wishing to purchase drugs online, increasing access to purer drugs without open discussion about harm reduction methods can increase harm for some. For example, the survey results on cocaine warn:

“The darknet markets offer users the opportunity to obtain good quality cocaine with reduced levels of perceived risk. As such, it might be the case that darknet markets lead to more harmful use by some people.”

4. Mushrooms are the ‘safest’ recreational drug 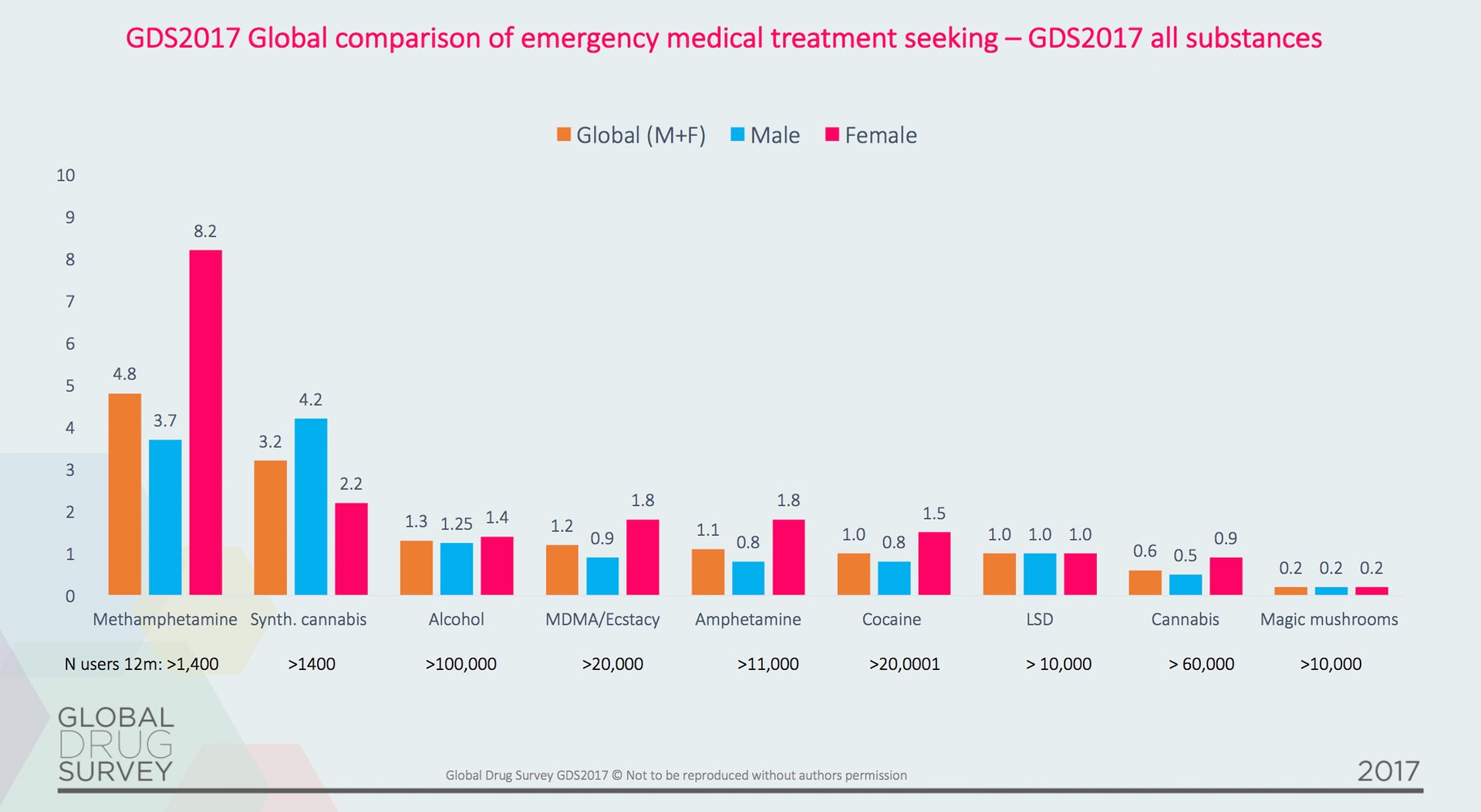 “Although the different psilocybin mushrooms across the world varying in size shape and potency in terms of their toxicity, they relatively safe with few and relatively mild adverse effects being reported,” said Dr. Winstock, but he warns that “combined use with alcohol and use within risky or unfamiliar settings increase the risks of harm most commonly accidental injury, panic and short lived confusion, disorientation and fears of losing one’s mind.”

5. Cannabis is a gateway drug… to tobacco

“For many Europeans, cannabis is a gateway drug to tobacco as many people are first exposed to tobacco when they smoke their first joint,” explain Ian Hamilton and Dr. Winstock. Up to 90% of Europeans are mixing their cannabis with tobacco, as opposed to only 8% of respondents from the USA. “In terms of public health the close association of tobacco with cannabis needs to become a focus of public heath intervention,” Winstock told us, adding that on this point the UK should be looking to follow the example of Canada and the US. The ‘cultural disdain’ for combining cannabis with tobacco in North America may also be due to the wider range of cannabis products available (legally and illegally) as well as a larger interest in vaping, which has been shown to be less harmful than smoking.

The most important takeaway from this year’s survey? A lot of people use drugs.

“Governments need to embrace the reality that treating people who use drugs as adults who care for themselves and others is a smart way to move forward and help save lives,” Dr. Winstock explains.

We are learning new things about drugs and their use every day, and everyone will benefit from more open discussion about drugs.

Raquel Morton is a staff writer for Volteface