The James Burton Story: Medical Cannabis in the Netherlands

The start of the controlled cannabis supply chain experiment, where legally produced cannabis will be sold in coffeeshops in ten municipalities, grown by government-designated growers seems to be moving the Netherlands in the direction of cannabis legalisation. What many people don’t know, however, is that medical cannabis has been legal in the Netherlands for a while now. James Burton was one of the very first to grow cannabis legally for medical use. This is his story.

1968 – A group of young American boys are sitting around a campfire, talking, laughing and telling stories. You would almost forget that they are here to fight a war. One of them is James Burton, only 19 years old. It feels good to forget about the horrors of war they witness on a daily basis, whether that be with alcohol, cigarettes, marijuana or heroin. A few nights before, someone was killed in their bed in the middle of the night. So although they might not say it out loud, everyone is scared to go to sleep at the risk of not waking up again. It’s better to go to sleep at seven o’clock in the morning, than seven o’clock at night. Everyone is stressed and most of all exhausted, the danger being that when you are stressed out, you make mistakes and  making mistakes in the jungle of Vietnam comes at a high price. The group around the campfire is passing around a shotgun with marijuana in it. They blow and the smoke from the pipe goes in the barrel, while being sucked out of the other end. It feels good: the high temporarily makes them forget about the people that are trying to kill them ‘out there’.

1972 – After returning from Vietnam, Burton finds out he has glaucoma, a degenerative disease that puts severe pressure on the eyes. If left untreated it can cause vision loss and even blindness. His brothers all suffer from the same disease, leaving them short of sight. Burton, however, doesn’t even need glasses. The only explanation he can find is that the marijuana he has been smoking has saved his sight.

According to research undertaken by Keith Green in 1998, smoking marijuana causes a fall in intraocular pressure (IOP), which is the fluid pressure inside the eye, in about 60-65% of users. The problem is, however, the drop in pressure only lasts for a few hours, so the consumption of marijuana needed to keep the IOP at a safe level would be rather high.

1987 – Eddie Railey, Kentucky state police investigator, calls it a one man operation. “It’s not that large, but it’s probably the most sophisticated operation I’ve seen in this area.” When Burton’s farm gets raided by police, they find over an estimated 112, 000 dollars’ worth of marijuana and 4000 dollars’ worth of processing equipment. Burton gets charged with cultivating marijuana and is facing over 50 years behind bars. He ends up pleading not guilty due to his medical necessity. The federal jury appears to agree with that, finding Burton not guilty of a felony crime, but three counts of misdemeanour possession. Burton’s attorney, Steve Hixson, calls the penalty mild, compared to what he was initially facing, admitting that ‘it’s a victory by any standard’. Burton ends up being transferred to 6 different federal facilities in a year, to avoid him talking to the press about his ‘medical necessity’. 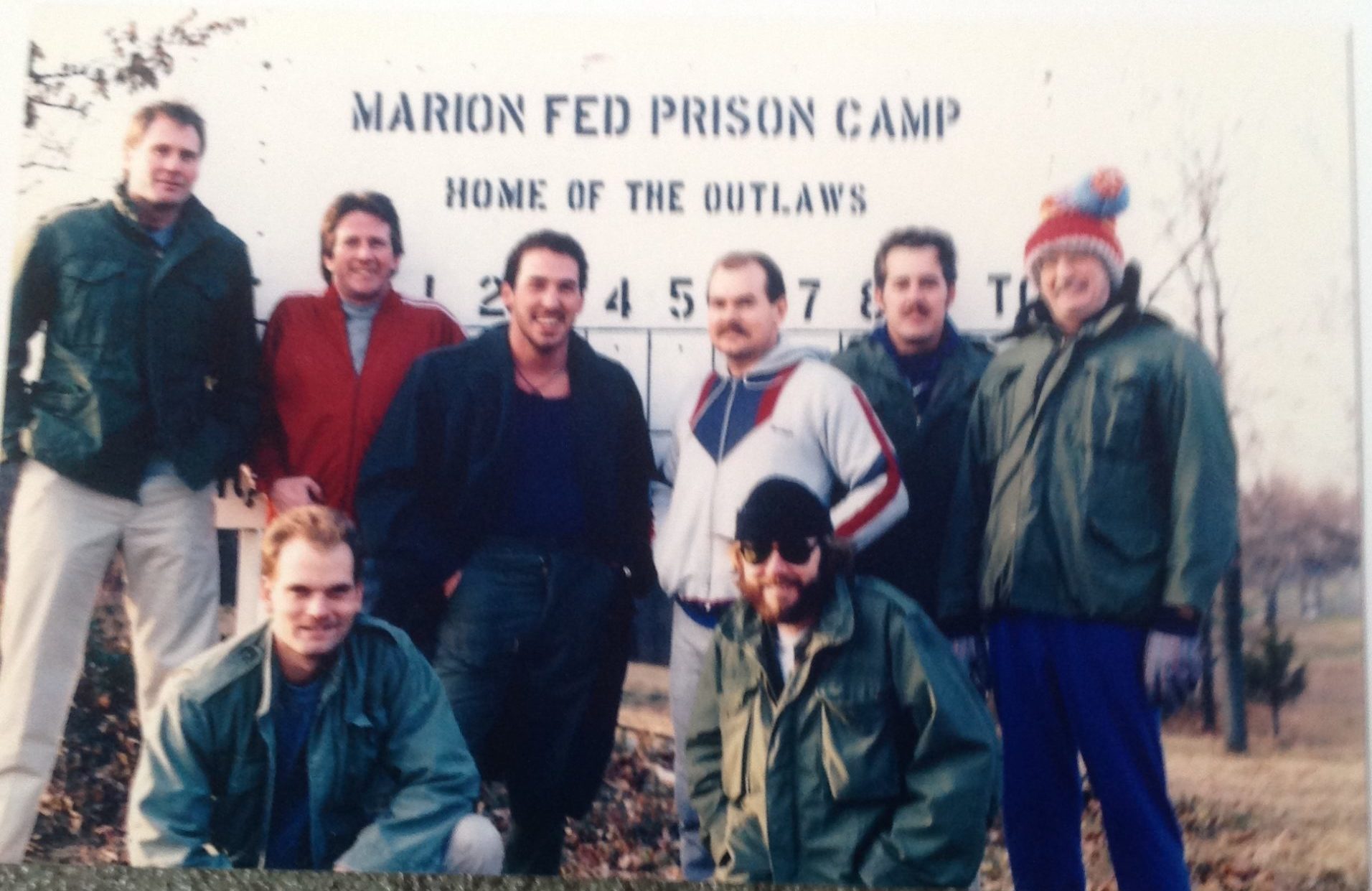 1989 – After getting out of prison, Burton has lost everything: his house, his cars, everything has been seized. There are two options: stay in the United States at the risk of going blind, or leave and go to the Netherlands where he can legally obtain marijuana to save his sight. Knowing that if he gets caught with marijuana a third time, he’ll be looking at a life sentence (‘three strikes and you’re out’), Burton decides to leave. He moves to Rotterdam, where he gets a job as a computer programmer, while growing marijuana in his spare time. It doesn’t take long before the police gets on his trail, because of the high energy bill. When Rotterdam’s police chef Jaap de Vlieger finds out that Burton’s not out to make profit, but provides all sorts of patients with his ‘medicine’, he decides to tolerate the ‘side project’, while telling him he’ll be ‘watching with three eyes…’. In 1993 Burton starts SIMM, the Institute of Medical Marijuana, selling only to patients with prescriptions for as little as 2.5 guilders (€1.15) a gram. After a while Burton starts providing pharmacies, Gouda being the first one, with his product as well as countless patients suffering from different kinds of diseases, from multiple sclerosis and arthritis to cancer and aids. 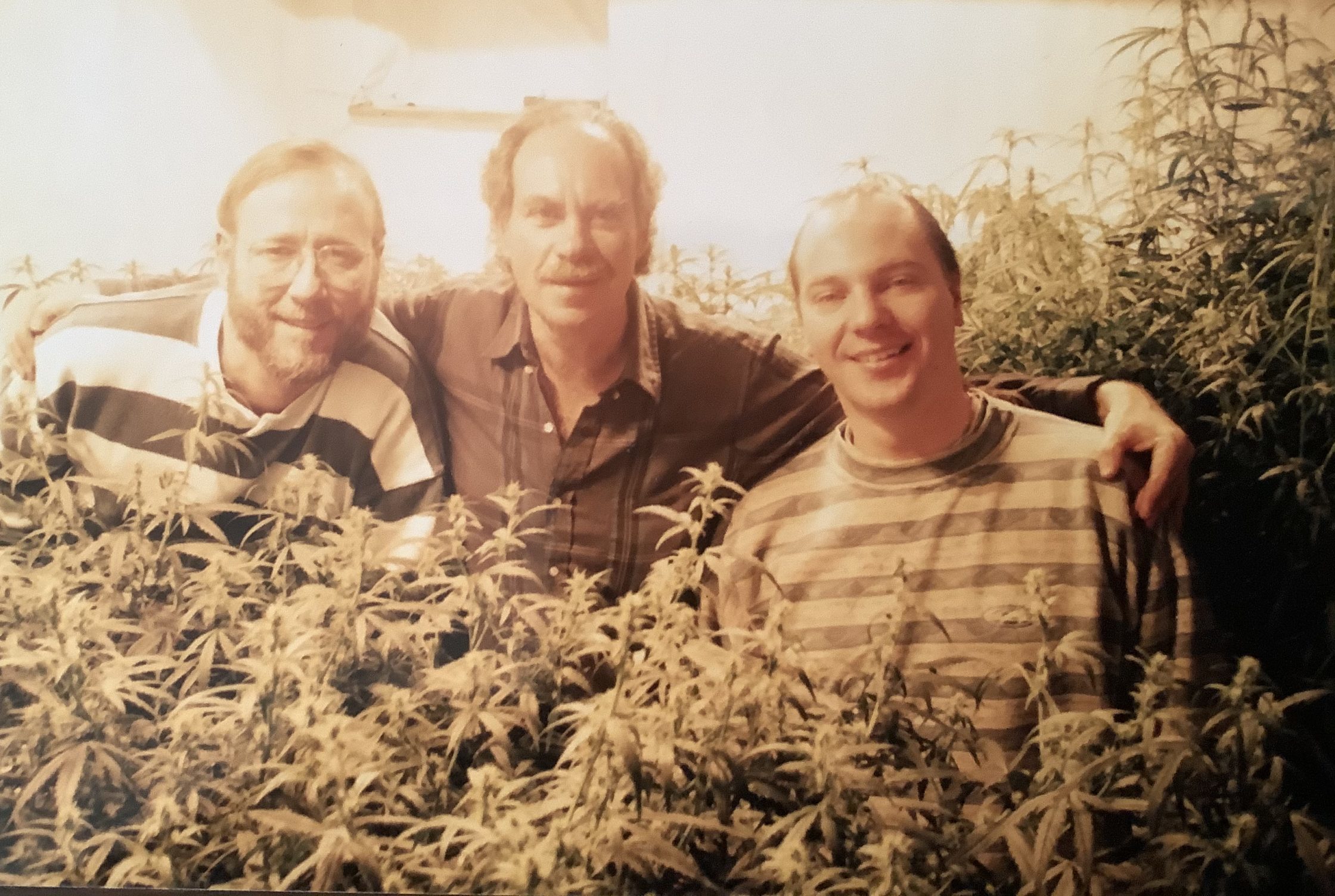 James Burton (left) in one of his first grow rooms in 1992, photo by James Burton

2003 – Burton gets a five year contract from the Dutch government to grow marijuana for pharmacies. He becomes one of just two official growers. The Bureau of Medical Cannabis (BMC), part of the Ministry of Health, gives him an official green light to start growing in bigger quantities. Dressed in a white lab coat, his ponytail barely visible, Burton gets to work in his 1800 square meter greenhouses in a secret location in the province of South-Holland. The complex is guarded by three big German shepherds and Burton’s work is being assisted by six full-timers and eleven part-timers. Over 130 different strains are being cultivated, all with different levels of THC and CBD (the active ingredients in cannabis). A day after the first official state-grown marijuana hits Dutch pharmacies, the college of health insurers advises against reimbursing medical cannabis.

2005 – It doesn’t take long before the ten to fifteen thousand patients who used to buy medical marijuana, start buying their medicine elsewhere. They are not satisfied with the quality, variety and price. The state-grown marijuana costs about €10 per gram, whereas coffeeshops charge no more than half of that. Health insurers often don’t reimburse medical marijuana because they feel there is too little scientific evidence for the effect of cannabis as a medicine. Less than a few hundred patients are left buying the state-grown product. At the end of 2004 the government has priced themselves out of the market and the waste processing facility in Rotterdam has to destroy kilos of excess cannabis. Not long after an interview with Dutch current affairs program NOVA, where Burton speaks out about what he calls ‘mismanagement’ by the government, his opioid license is revoked. The only state grower that is now left is Bedrocan, owned by Tjalling Erkelens, who is Leendert Erkelens’ brother, (then) senior official of the Ministry of Justice. Burton loses his institute and is forced to sell everything. In the years after Burton stops cultivating, business is slow for Bedrocan, but after about ten years it finally picks up. Popularity of cannabis-oil is partially to blame, as the popularity of dried cannabis-tops (flos) keeps declining, according to the Dutch Foundation for Pharmaceutical Key Figures (SFK). Still in the last few years the numbers are going down again, possibly due to the Dutch College of General Practitioners, which advises GP’s to be cautious when prescribing cannabis because ‘there is insufficient scientific evidence for pain reduction or quality of life improvement’. 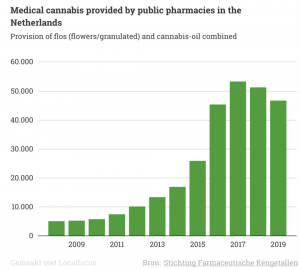 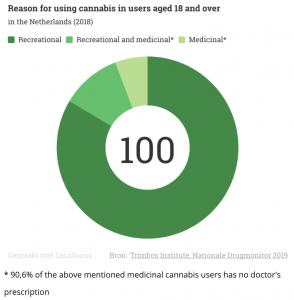 2019 – Almost fifteen years down the line, the Netherlands is getting ready for a new experiment. This time, it’s not just medical cannabis, but recreational cannabis. In this experiment coffeeshops in ten municipalities will start selling legally produced cannabis supplied by ten government designated growers. The aim is to find out whether it is possible to regulate a quality-controlled supply of cannabis to coffeeshops and to see if the experiment has an effect on crime, safety and public health. Although a lot of coffeeshop-owners seem excited because it might put an end to the current ambiguous ‘backdoor’ policy, where coffeeshops are allowed to sell cannabis, but not stock up on the product, there’s still a lot of discussion about whether or not this experiment is the way to go. Burton doesn’t believe the experiment will be a success, he thinks the same thing will happen that did back when he was growing: the price will be too high and the variety too low. If either one of those factors is completely off, customers might buy their product elsewhere, either in coffeeshops that are not in the experiment or on the black market. The experiment is set to take place in 2021.

`
This is James Burton’s story and it represents his recollections and experiences over time, some events have been compressed. We have spoken several times on the phone and over Skype (May 26th and June 4th/9th/18th).

The data on drug use under armed forces in Vietnam has been obtained through History.com, the US Department of Defense Report from 1971 cannot be found online.

Data on the reasons for using cannabis in users over the age of 18 has been found in the National Drug Monitor 2019 by the Netherlands Institute for Mental Health and Addiction (Trimbos). This report was made in cooperation with the Scientific Research and Documentation Center, which is part of the Ministry of Justice and Security in the Netherlands. This data is based on over 10.000 of online and face-to-face interviews and health-questionnaires.

Numbers on dispensing of medical marijuana through public pharmacies in the Netherlands have been obtained through the Stichting Farmaceutische Kengetallen (Foundation for Pharmaceutical Key Figures). Their data collection is achieved with the help of over 97% of Dutch public pharmacies. They also have user figures of over 15.3 million patients.

This article is not intended for any form of medical advice. The reader should consult a physician in matters relating to his/her health, particularly with respect to any symptoms that require medical attention.

Factfile: The Endocannabinoid System – Control Panel of the Human Body