Three months ago, Yvonne Cahalane and her 18-month old child Tristan left the small town of Dunmanay in Cork for the United States of America seeking opportunity.

The story of this mother and child is unique to the thousands of Irish people that have emmigrated before them. They are the first “international medical cannabis refugees” in the State of Colorado, as described by a local medical support group that welcomed Yvonne and her son under a blue flag of Colorado which was erected in downtown Denver on the same day as Tristan’s second birthday.

Young Tristan suffers from Dravet Syndrome and suffers up to 20-seizures every day, even after having undergone comprehensive treatment for epilepsy in Ireland. Thankfully Yvonne found hope when she launched a crowdfunding page and fundraised enough money for the pair to travel to Colorado in December 2015, where they will stay to test this potentially life-saving treatment which is now legally accessible. So far the results are outstanding and Tristan has regained the ability to speak.

During this short period of time another brave mother named Vera Twomey, also from Cork, spoke on Red FM about a similar case of Dravet Syndrome with her 6-year old daughter Ava.

Speaking live on air, Vera courageously described how her daughter has gone beyond any traditional medications and she is desperate to try anything that might help.

However Vera is heartbroken at the thought of having to emmigrate. Speaking to Neil Preneville, Vera says that she will not seek to move out of Ireland or undergo cannabis treatment under the current laws. As another tragic tale was discussed over morning radio, groups from all around the country reacted positively by forming together last week with Help Not Harm to collectively campaign for safe access to medical cannabis for patients in Ireland. The initial stages of this campaign shows great potential and the people involved are nothing short of inspiring.

The Help Not Harm medical campaign will be led by Tom Curran, husband to the late Marie Fleming, who addressed an audience of 80 people in Cork Institute of Technology last week.

Tom is widely acknowledged as one of the leading campaigners in the country, having dedicated over a decade to areas of palliative care and right to die. Tom’s story is powerful. Having become a full-time carer for his wife who suffered from Multiple Sclerosis, Tom grew cannabis for 10 years. This treatment allowed Marie to benefit from the hugely positive effects of cannabis on muscle spacisity and this courageous act by Tom drastically improved his wife’s quality of life.

You could tell in an instant by looking around the packed hall at the gazing faces, each one glued to Tom, that this story was having a strong impact.

Tom’s wit and fluid story-telling instilled a delicate mix of emotions and laughter in a mesmorised audience. And the stories didn’t stop there. We continued to the Help Not Harm office in Cork City later that evening for a public strategy meeting. The effects of Tom’s earlier speech in the college was felt as, from around 6pm, people packed into the office.

Many great ideas were respectfully shared around the room from familiar faces to new ones. We heard from medical cannabis campaigner Jonathan Liebling of the United Patients Alliance in the UK, as well as CISTA Northern Ireland candidate Barry Brown, Oliver Moran from the Green Party, as well as members of SSDP Ireland and NORML Ireland. The meeting has sparked a new collective of passionate campaigners dedicated to help patients in Ireland receive access to medical cannabis. 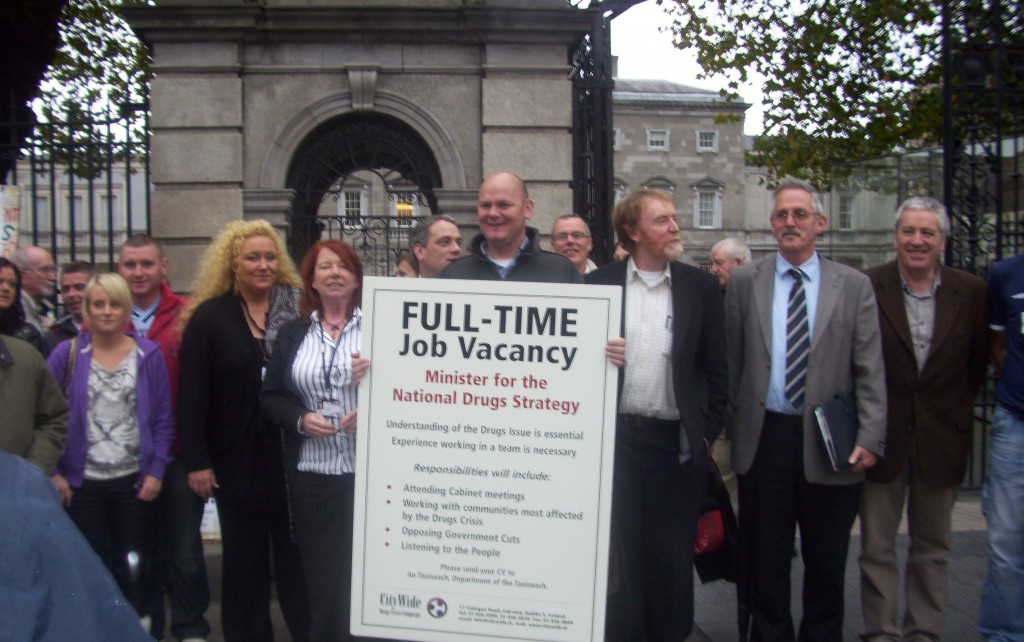 Stories like Tristan’s have set a precedent for patients in Ireland to come forward, such as the case of Vera Twomey and her daughter Ava.

With around 115 cases of Dravet Syndrome in Ireland and 8,000 MS patients, it is becoming more and more common for families to be forced to decide between their home and their health. Some follow similar paths to Tom Curran when he cared for his wife and investigate the possibility of growing cannabis, although illegal, and others have begun to decide to emigrate like Yvonne Cahalane. Then others, such as Vera, can not try either option and must wait for regulations around medical cannabis to allow for the treatment of epilepsy, as it currently already recognises MS. Even still, there is yet a single medical cannabis product available in Ireland while people desparately need it.

Thank you to everyone who travelled far and wide for the first day of events for our medical campaign. If you would like to get involved please sign up at Help Not Harm

Also, a moving account of treating a loved one with cannabis oil – Sylvia’s Story: The Love of my Life needs Cannabis Oil to Survive