The Lib Dems have traditionally been the most vociferous advocates for progressive drug reforms, but recently things have been suspiciously quiet…

‘We’re criminalising far too many young people. It’s also meaning that it becomes a gateway to other crime. ‘If instead we can regulate the cannabis market, we can raise taxation revenue from that, we can set regulations about the safety of the cannabis which is bought and sold. ‘Then we can create a much safer environment. This is something that is led by the evidence. ‘It’s happened in other countries where they’ve seen a decrease in crime rate and indeed they’ve been able to make sure people’s health has been protected too.’

These were the words of former Lib Dem leader Jo Swinson during the 2019 general election campaign at which she would be unceremoniously ejected from her own seat in East Dunbartonshire – much to the delight of Nicola Sturgeon.

The Liberal Democrats have long been the champions of progressive drug policies in the UK, willing to make the arguments that Labour have historically been too cowardly to champion.

In their 2019 manifesto the Lib Dems repeated their historic promises from the 2017 election regarding the legalisation and regulation of cannabis, and moving departmental responsibility for drugs to the Department of Health and Social Care (first proposed in 2015). The 2017 manifesto was a landmark document, the first by a major UK political party to propose a regulated cannabis market.

Much also remained the same between 2017-19 with regards to the party’s position on personal drug use, announcing that the party will “divert people arrested for possession of drugs for personal use into treatment, and imposing civil penalties rather than imprisonment”, a similar model to what has been implemented in Portugal which decriminalised drugs for personal use in 2001.

In 2015, they set up an expert panel to consider how a legal market for cannabis could work in Britain, called for doctors to be able to prescribe cannabis for medicinal use and advocated for legislation to make the Advisory Council on the Misuse of Drugs independent in setting the classification of drugs, and to end the use of imprisonment for possession of drugs for personal use.

This followed a journey beginning in 2002 with the development of a more detailed official drug policy document called Honesty, Realism, Responsibility: Proposals for the Reform of Drugs Law. It contained a strong critique of prohibition generally, and openly explored ideas for decriminalisation of personal drug possession, and legal regulated cannabis supply for the first time in British politics.

But under the leadership of Ed Davey, the party has been silent on drug policy issues. So what’s changed?

At the moment, see the huge emphasis placed on by-election victories in North Shropshire, Chesham and Amersham and Tiverton and Honiton, the party is clearly focused on winning seats from the Tories in the ‘blue wall’, as part of an unofficial dove-tail strategy with Labour to erode the Conservatives’ majority from all directions.

Sir Ed Davey, the genteel leader of the party is from the ‘orange book’ wing of the party (that’s the classically Liberal right of the party) and served as Energy Secretary during the coalition. He describes himself as believing in “in the free market and in competition” and a “strong free-trader”. Clearly, he knows he is best suited to winning over Tory seats – which make up the vast majority of Lib Dem targets and marginals anyway.

Davey himself has a decent record of campaigning on drug policy issues. He’s spoken out in favour of the work of the Bristol Drugs Project, supported the legalisation of medical cannabis, and has condemned the ‘war on drugs’ saying “I think we do need to review the drug laws. I think we need to look at the evidence.” The ‘lets legalise and regulate cannabis’ page is still up on the Lib Dem website to be fair, but it looks to be a data harvesting exercise as much as a meaningful policy commitment.

The Lib Dems have gone quiet on drugs because they see it as an unnecessary fight to have when focusing on winning back socially conservative seats in the south. That’s politics. Politics is about choices, and they’ve chosen to go quiet on it.

Potentially still two years away from an election, with little real power to change the agenda without one of the Tories or Labour also rolling the pitch, and with very very little media attention on them, drug reform is a fight the Lib Dem’s simply don’t feel it necessary to have right now.

Now, making the bold positive case for drug reform might get them some more air time, but Davey knows this would be to play into the hands of the Tories and even Labour, who launched crass attack adverts about the Lib Dem’s drug policies during last year’s local elections. 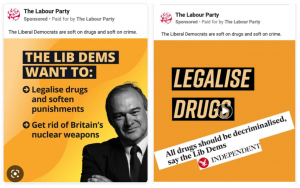 This was a particularly galaxy-brain move from Labour HQ given a) the overwhelming support for drug reform amongst Labour voters and b) the electoral reality that Labour and the Lib Dems need each other to do well in order to do well themselves. They have an electorally symbiotic relationship.

A Labour party advert has attacked the Lib Dems for wanting to legalise drugs… but 42% of Labour’s own voters want to legalise soft drugs like cannabis, and another 25% want to decriminalise themhttps://t.co/EF4SIMGUWR pic.twitter.com/uEa7bFPtoT

Given the record numbers of drug deaths in the UK and the race to the ridiculous being waged by Labour and the Conservatives on drug policy, it’s more important than ever that British politics has a strong, alternative voice advocating for life-saving, evidence-based, progressive drug reforms. The Liberal Democrats have historically played this role, but in their quest to win over affluent, southern voters they are seemingly willing to ditch this long-standing policy position.

The Liberal Democrats could act as wingmen to Keir Starmer’s Labour as part of a ‘coalition of the respectable’ advocating for ‘sensible, evidence based’ drug policy reforms. The two knights of the realm, Starmer and Davey, could stand united in calling for an overhaul of our drug laws.

This piece was written by Jay Jackson, Head of Policy & Public Affairs at Volteface. Tweets @wordsbyjayj