Friday 14th July was a big day for UK’s drug policy strategists. Many of our best and brightest, including treatment service providers, mental health practitioners, police and probation officers, gathered at Manchester Metropolitan University (MMU) for a conference called “Responding to ‘Spice’: Developing an Integrated Response.” The cross-sector discussion was led by Dr Rob Ralphs, Senior Lecturer at MMU, and co-hosted by VolteFace in our ongoing collaboration with MetroPolis.

Greater Manchester’s Mayor Andy Burnham promised the assembled strategists his full support in a rousing Keynote speech, in which he pledged to end rough-sleeping in Manchester by 2020. He added:

“I give you my full commitment, whatever comes out of this conference, if it has the broad support of you all, I will back it and put my weight behind it.

His wholehearted endorsement of our determination to develop an impactful response to ‘Spice’ set the tone for the day’s interdisciplinary policy innovation.

The format of Friday’s event was an information exchange followed by workshops predicated on identifying the most needed drug policy innovations. This was capitalising on the constructive success of “High Stakes”, the prison drug policy symposium which Dr Rob Ralphs and Volteface co-hosted in May 2017, along with User Voice. By cross-pollinating insights from the people with direct experience of the problem and those with the most relevant expertise at their events, VolteFace and MetroPolis aim to close the gap between rhetoric and reality.

Manchester is the most appropriate city in the UK to lead the way in closing the gaping gap between rhetoric and reality in relation to ‘Spice.’ Ever since they began reporting on the “Spice epidemic”, our local and national press have dubbed the UK’s second most populated city the epidemic’s epicentre. As VolteFace’s Abbie Llewelyn made clear earlier this year, there’s no place in our society for dehumanising rhetoric such as descriptions of “zombies” on ‘Spice’ “swarming” the streets. Setting such stigma aside, it is nevertheless a truth that was universally acknowledged at the conference that ‘Spice’ is uncommonly visible throughout Greater Manchester.

We arrived at 9:30pm on Thursday night. On leaving Manchester Piccadilly Railway Station, the widespread homelessness which Burnham pledges to end was immediately evident: we noticed five different clusters of people sleeping rough within the space of three streets. Making our way through Piccadilly Gardens, we saw a larger group forming an orderly queue in front of three “alphas,” a term used by career support worker Peter Morgan to describe the members of the tent community who sell ‘Spice’ as well as use it.

Rough sleepers in Manchester (via Volteface)

This chimes with everything that Peter tells me when he talks me through some of the real-life situations that inspired his forthcoming book The Spice Boys (July 2017). His true-life novel is based on his long career as a support worker assisting young homeless people in Manchester, and it charts the impact that the Psychoactive Substances Act 2016 (PSA) has had on the lives of the people he works with.The

The repeated exchanges of cash and baggies were brisk but overt. Emblematic of the fact that the Mancunian ‘Spice’ market is thriving regardless of the PSA, the exchanges that we saw were taking place metres from the site of Elysium, Peter’s thinly-veiled fictionalisation of Manchester’s most prolific former vendor of “legal highs.” The ‘Spice’ trade is technically illegal, but the reality is that it has simply been shorn of its former awnings and reconsolidated a few metres beyond them in the streets themselves.

Meanwhile, from the Palace of Westminster, the government chose the day of VolteFace and MetroPolis’ #SpiceResponse conference to proclaim their new drug strategy. Eagerly awaited and long overdue, the document is replete with instantly refutable claims, like the assertion that their “landmark” PSA 2016 has been effective, and that it “removes [the] availability [of new psychoactive substances (NPS)] from open sale on the UK’s high streets and puts an end to the fast paced nature of the market.” In fact, the “open sale” of NPS is an accurate description of the perfect storm that greeted us when we arrived in Manchester to co-host this conference on ‘Spice.’

Perhaps the shortcomings of the strategy -if not the extent of them- were to be expected. However, particularly in relation to its depiction of the PSA and its effects on ‘Spice’, the document appears to widen the gap between rhetoric and reality. Max Daly charts the ways in which, despite “virtually inventing harm reduction in the ‘80s,” the UK is now “lagging behind” most of the rest of the world as we fail to adopt evidence-based drug policies that reduce harms. Alex Stevens, a member of the Advisory Council on the Misuse of Drugs (ACMD); which recommended decriminalising drugs to the government when asked and was then blindsided; brands the strategy “a shameful ignoring of evidence.” Mental health and substance use specialists Ian Hamilton and Harry Sumnall point out that the new drug strategy does not, in fact, contain any new drug strategies, and even if it did, the proposals aren’t funded anyway. 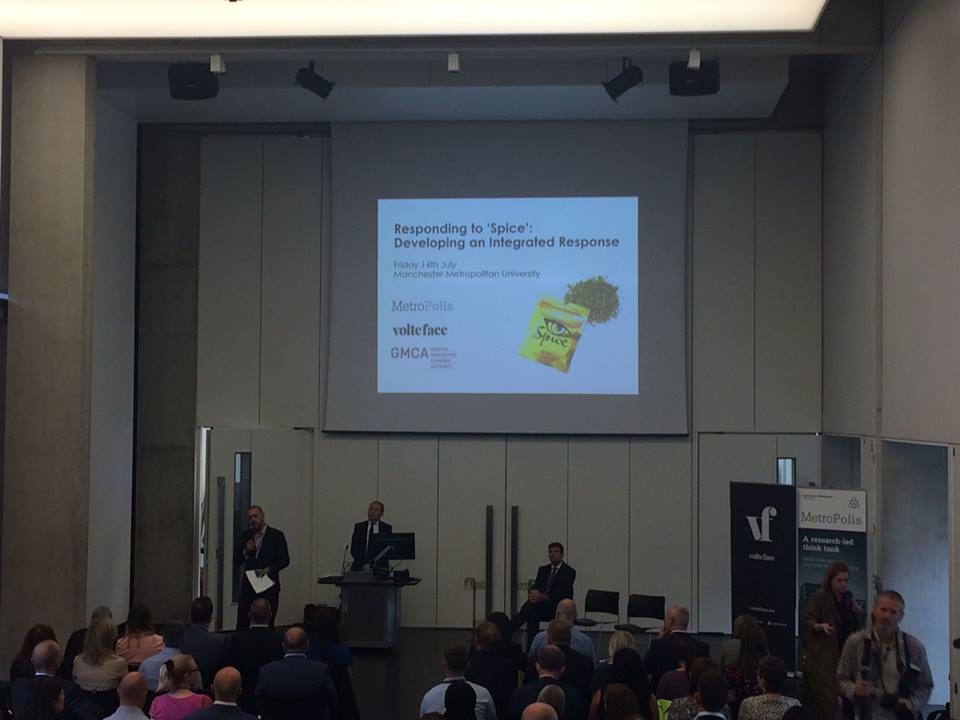 The event (via Volteface)

So it was heartening to spend the day at the #SpiceResponse conference, responding to some problems unaddressed by the strategy in depth. It was also encouraging to hear Burnham align his stance with many of these concerns: in particular, he pronounced the descriptions of the schemes it does propose “hollow.” (“Where is the money?”)

Back at the frontlines, Lorna Smith and Rachael Hope talked us through the extensive research they have conducted into the impact that the PSA has had on the people of Newcastle-upon-Tyne from a public health perspective. Sharing insights on NPS toxicology trends in the area, they explained how the Act has, as predicted by everyone who has direct experience of service provision or an academic knowledge of psychoactive substances, had a disastrous impact on the safety of people who use NPS.

Hope drew on data from Max Daly and Harry Shapiro’s DrugWise report, “Highways and Buyways: a snapshot of UK drug scenes 2016” to illustrate how the PSA has driven the manufacture and distribution of the substances we refer to as ‘Spice’ underground. This has amped up their toxicity, their prices, and correspondingly, rates of drug-related acquisitive crime.

Hope’s presentation was a testament to the value of adopting a “whole person” approach when working to understand the ‘Spice’ crisis. Particularly revealingly, a drop in ambulance call-outs turned out, on talking to people who use ‘Spice’ in Newcastle, to be attributable a collective sense of having learned how to better manage overdoses, rather than indicating a decline in use and a correlative diminished number of overdoses. (A conclusion which it would be all too easy to draw, if one was to consider the statistic without bothering to find out more about the cluster of individual humans with lived experiences that it pertains to.)

However, bringing the day-to-day reality of people living in such precarious situations into the academic discourse can be challenging work. Any substance billed as ‘Spice’ has the potential to facilitate an extremely intense high, and “you’re out of it for eighteen hours of the day,” explains Lauren Lowe, a research scientist from Manchester Metropolitan University. Ideal in many respects, if you’re one of the people whom Burnham describes as enduring an existence “without hope.” Not so ideal if you’re Lowe, and your research involves meeting these individuals for appointments. This makes the data she does collect all the more valuable, as it is only through such field research that their experiences can be documented, and ultimately, in an ideal world, considered by the policymakers arbitrating their lives. 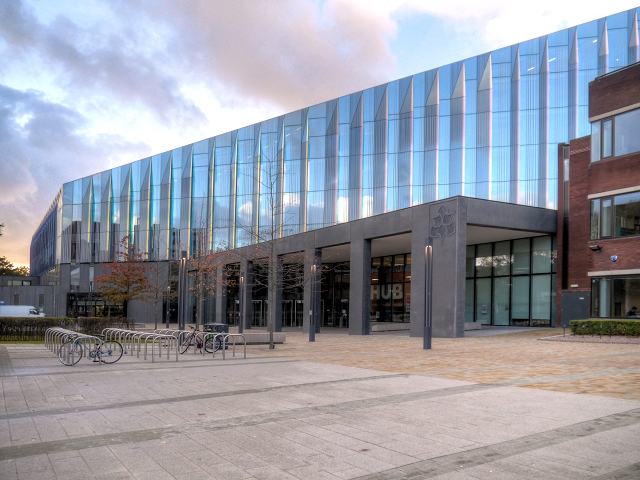 Discussing the scope of the ‘Spice’ problem in Wrexham, Substance Misuse Commissioner Vicky Jones lamented the “extreme polarisation” of the public’s perception of ‘Spice,’ noting that attitudes range from discrimination (“Why can’t we put them all in a minibus and send them somewhere else?”) at one end of the spectrum to agreement that “these people need our help” at the other. However, the attitude which she finds the most problematic is the widespread “normalisation” in some communities of the medical emergencies ‘Spice’ regularly causes.

Jones described assisting an unconscious man whilst an elderly bystander reassured her (“It’s alright, love, he’s just had some of that ‘Mamba’ stuff!”). “This woman shouldn’t know what ‘Mamba’ is,” said Jones, “let alone see it.” There were 55 Spice-related ambulance call-outs for rough sleepers in Manchester this year the weekend before Easter, we learned from David Regan, a director of Manchester Health Care & Commissioning with over 20 years’ experience in the field. We need an integrated response to ‘Spice’ in order to reduce the bluelight incidents and A&E admissions associated with it because ‘Spice’ use is so thoroughly integrated into a tapestry of other social problems – unemployment, disempowerment, financial instability – and these usually affect people in combination.

What policy changes does an integrated response to ‘Spice’ involve? “I can see Manchester heading towards decriminalisation” says Rebecca Askew. The city would be following in the footsteps of Durham and Bristol, whose police forces have refused to waste limited resources futilely penalising individuals for drug possession, leading to “de-facto decriminalisation.” Askew derives her positive outlook partly from Andy Burnham’s eagerness to embrace alternatives to the government’s drug strategy. Decriminalisation of all drugs in the UK may not be on the immediate horizon, but the conference concluded by voting on several innovative pragmatic responses to ‘Spice’.

New approaches which have not already been repeatedly tried and found to be ineffective – like many in the government’s ‘new’ drug strategy – seem like the obvious way to go about tackling new issues. Especially when we remember that VolteFace and MetroPolis are attempting to resolve social problems which, like the new psychoactive substances they pertain to, have been born directly out of the failures of the old, punitive policies, which were trumpeted by the government in previous drug strategies and disappointingly reiterated in the 2017 offering.

My favourite take-away from the #SpiceResponse conference? “You can try banning the drugs, but you can’t take away people’s receptors.” Realistic drug strategists who acknowledge that drug use isn’t going away and who are willing to explore possibilities for genuinely reducing drug-related harms will eventually win out.

Rosalind Stone is Director of Development for Drugs and Me, Publicist for Psychedelic Press and is a regular contributor to Volteface. She has also written for Psymposia, Talking Drugs, The Stylist and The Londonist. Tweets @RosalindSt0ne

Drugs, Dissociatives and Displacement: The Festival Drug Report – Part I