To kick off the first week of 2022 we are spotlighting the work of women in the medical cannabis sector. 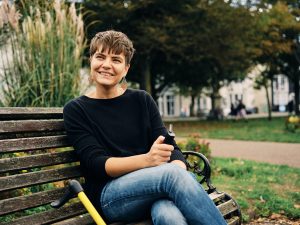 In this Volteface interview Carly Barton, Director of Cancard and patient advocate, has spoken about her journey into the medical cannabis sector as a patient, and the value of having lived experience and patient voices within the sector. We also go to learn more about the current issues she is working on, and her hopes for the future of medical cannabis in the UK. Finally, we covered Carly’s experience of this male dominated field, and why women need to be loud and proud about using medical cannabis, and working within the space.

How did your journey into the medical cannabis sector begin?

I am first and foremost a patient. I had a stroke in my 20s that left me with damage to my brain and chronic neuropathic pain. My condition had gotten so bad that my neighbour would often say that he could hear me screaming through the walls at night. I spent 6 years on opiates, such as fentanyl and 23 other drugs, none of which managed my pain. The pharmaceuticals had completely destroyed my personality and my way of being; it got to the point where I couldn’t see how I was going to get through the next day.

It wasn’t until I tried cannabis, and I was reluctant to do so, that I had the experience of being pain free for the first time in 6 years. Since, I’ve used cannabis daily and I’ve managed to come off all of the pharmaceuticals through the use of just 1 plant. After that I got a bit obsessed with cannabis and also with the stigma, I liked the idea of challenging my own stigma, and openly talking about it. I also liked seeing how other people in similar situations to me were doing.

What role do you now have in the cannabis space?

I’m an advocate and I support other people who are in similar situations. When the law changed in 2018 I was the first person to get a private medical cannabis prescription for flower in the UK, and it cost me £1500 for 1 month’s supply. This was a ridiculous amount of money and although the costs have come down, I think there are still significant costs involved, especially in terms of the clinic consultancy fees. Access to the medical cannabis products was, and still is, incredibly difficult. It can also be very hit and miss with regards to the quality, and there are also only a handful of strains to choose from; which we cannot justify will suit everybody.

I stepped into the role of engaging with the police to see if there was a way of facilitating an agreement around possession of small amounts of cannabis, for patients who would otherwise qualify for prescription, but are currently self-sourcing. That’s how Cancard was born. Cancard is a medical ID for patients who qualify for a private prescription, but remain without access. Essentially it’s an indicator to police, or any third party, that you are a genuine medicinal consumer. If you are stopped by the police then you would present your ID card, and with this information the police can use their discretion to not arrest or fine patients, and allow them to keep their medicine.

Why is lived experience important within the medical cannabis sector?

I’ve been to many events where there are mostly white middle-class men in suits taking the stage, and speaking about cannabis as if it is some kind of commodity; they could be talking about rice or flour. I think there’s a secondary green rush happening in the UK at the moment, which seems to be filled with people that do not quite understand the power of this plant. It’s clear to me that there is often a lack of experience at these events.

Before I tried cannabis I was looking at end of life clinics, and this plant has saved my life. I have got to meet many patients who have a very similar story to mine, and I take that experience really seriously. When a patient—let’s take Callie Seaman—gets on stage and talks about how cannabis controls her epilepsy, the delivery of this personal narrative is very different to when someone from the pharmaceutical industry gets on stage. I think that you need to have some of that lived-experience to work in this space, and to understand why people need this plant, and what we can do to make access easier.

I’m hoping that the women–and men—who are in this for the right reasons, and have an authentic reason to back this plant, are the ones who are listened to.

Are there any key issues within the sector that you are currently working on?

We recently did a patient study, where we asked Cancard holders questions about the parts of their lives that were affected by the current policy, what their needs are, and so on. It’s often forgotten that there are millions of people that are living with the impacts of this policy. These people can tell you a lot, but often they are not asked. Some of the main issues raised were to do with social stigma rather than police stigma. As Cancard holders the patients asked have much less fear of the police now, but still feared and were subjected to interventions from social services, social housing ect.

One of the main issues raised was fears held by parents around their children’s education. If you are a parent who is medicating then there are real concerns around how you explain that to children, what they do with that information, what are they going to say when they get to school in the playgrounds. We’ve got an ex primary school head teacher and education expert to write a series of children’s books for families to talk about cannabis as a medicine. The first one’s called ‘What’s that funny smell?’. We’re hoping that these educational resources will help parents who use medical cannabis to break down stigma within the family unit.

We are currently working on a Cancard Aware project within the community, where we are working with businesses to spread awareness of the scheme. Patients and Cancard holders, while not fearful of the police, are often concerned that they might not be able to go somewhere public because they can’t medicate. We’re going to create a map of all of the places which have had training, and understand the needs of patients and why they might be taking the medication.

The third issue is one of accessing quality medical cannabis products. We did a study at an event where we had a pop up lab, and we asked people to bring samples of their cannabis. We had an amnesty to run samples through the lab on site, and tested for potency and contaminants. One of the major concerns that patients have got at the moment is the quality of prescription cannabis. We had a range of prescription cannabis under the scope, and I’ve never seen worse cannabis up close. The trichomes were completely obliterated, the terpenes were completely, and had been radiated away.

We’re going to be doing some work around trying to encourage greater quality of medicine for patients that choose the prescription route. As well as to help try to push for lower pricing, and a greater awareness of the community’s needs.

What are your hopes for the future of medicinal cannabis?

I think mine is quite idealistic, but I think we’ll get there one day. I think there should be more than one route of access. I don’t think we should have medical cannabis only through the NHS, or only through dispensaries, or that we should only be able to grow.

I think there should be NHS access, there should be training for NHS doctors, and we should have more products available through the NHS. I also think that like we’ve seen in the Canadian recreational market, a lot of medicinal consumers found that they were more comfortable going to the dispensaries than the doctor. So there is also a place for this model.

I think we need to have that option of growing medical cannabis for people, and not have that option bathed in the fear of having a criminal record. For some people growing their own medical cannabis isn’t just about being self-sufficient and having access to a particular strain. Some find it empowering that they’ve planted a seed which has then brought down their inflammation, which has then meant that they can spend more time with their family. That’s a very different energy from “I have taken a pill and I don’t understand what’s in that pill.”.

In your experience, what’s it like to be a woman in this male-dominated space?

I think being a woman in the industry is very different than being a woman within advocacy. At an industry event you’re put on a panel with a load of white men, and you’re there because you’re a woman, and they have to have a woman. In these events you’re always aware that you are the token woman, and that is the thing that we’ve got to change.

However, in the wider world of advocacy, outside of industry, I think that being a woman is beneficial. If we look historically at the cannabis community it’s been male-dominated for years. It wasn’t until women came into this space and—actually, mothers—that the conversation changed, and I think that’s because there’s nothing more scary to men than a woman standing up for her child. We’ve seen that with Hannah, and we’ve seen that with Charlotte; they’re both powerful women in their own right. I think there is a difference in our communication style as women, and our willingness to open up dialogue.

I think that there’s a need for groups like the’ Women in Medical Cannabis Leadership’  network, to support each other, to champion each other, and to help each other shape the industry.

Do you have any advice for women who are working in the space or looking to get involved in the space?

My advice would be don’t be shy, now’s the time to be loud and proud, women have historically been more shy of standing on a box and talking about cannabis. They are often concerned about their children, being perceived in a certain light, their careers and so on. It’s always more acceptable for men to talk about cannabis than it is for women, but in the past year we’ve seen many more women popping up. Along with this we’ve also seen many other women wrapping their arms around those who are entering the space, and going “go girl, keep using your voice!”.

We come from a place where there was stigma, and it was difficult to talk, but that time is gone now. Find yourself a group of women who you can be really honest with, and talk about the difficult situations you’re going to find yourself in, apart from that, don’t stop.

It has been fantastic to catch up with our good friend Carly Barton, and learn about how her lived experience as a medical cannabis patient has lead her into the professional sector. It’s clear from our conversation with Carly that some parts of the sector are lacking female representation, as well as insight from patients with lived experience.

Although this doesn’t seem to be reflective of the sector as a whole, and through her work at Cancard, and the patient advocacy networks Carly is doing a tremendous job at amplifying and empowering the voices of patients, as well as other women in the space.