It’s Friday night. You’re planning on going to a festival with your friends. But first you take your bicycle and you take a trip to the ‘XTC-shop’. The cashier calculates exactly how much MDMA your pill needs to contain based on your weight and experience. The ingredients of the pill are listed on the packaging, which includes a leaflet as you would get with any other medication. You hand over your ‘pill passport’ in which your purchase is registered and you’re on your way. Is this the future of ecstasy use in the Netherlands? According to a group of 18 different Dutch experts, it could be.

A police officer, a lawyer, a toxicologist, a philosopher, a pharmacist, a behavioural scientist and an anthropologist. It almost sounds like the run up to a terrible joke, but the opposite is true. These and more experts bundled forces and shared their knowledge in order to take a look at the current MDMA policy in the Netherlands. Together they looked at 95 possible MDMA policy options, which were scored on 27 different outcomes, like their effects on health, crime, ethics, environmental impact, degree of use, international relations and more. These outcomes were all weighed differently, with public health and crime at the top of the list.

The goal of this ‘ThinkTank’ was not for the experts to give their own personal opinion, but to look at what would be the best policy, objectively speaking, explains Floor van Bakkum, initiator and Prevention Manager at Jellinek, which is the expert in Amsterdam when it comes to alcohol, drugs and addiction. She explains that it had been quiet on this policy front for a while and it was time to get the conversation going again. “The idea behind this system is that we want to judge the effects of different policy measures as objectively as possible. We’ve seen in the past that more people have said that some sort of regulation could have positive effects on things like public health and crime, so the results weren’t completely surprising, but because we broke it up in such small pieces, there was no telling exactly which way it would go.”

Not all participants share in the results of the ThinkTank, however. The Dutch police publicly distanced themselves from the conclusion. Suzanne van der Graaf, police spokesperson, explains that they felt like the discussion focussed more on legalisation rather than combating crime. “Being police, of course, we’re neutral, meaning we cannot agree with the idea of legalising ecstasy. We don’t feel like we haven’t been heard, but the results are not in line with our vision, we are in favour of a preventive policy, like the interception of drugs.”

The Trimbos Institute for Mental Health and Addiction also announced that they did not share in the results, stating that they felt that their work was done after giving their input. “We see it as our role to highlight the various sides and positions and where necessary to provide the facts or data, like we did in the development of the ThinkTank’s scoring tool, not to plea for ‘the solution’ or any particular model,” said their spokesperson.

According to Van Bakkum, agreeing or disagreeing with the results is not relevant. “The problem with an exercise like this, is that you don’t know what the outcome will be. It doesn’t really matter whether they agree with the outcome or not, what we needed was their input, like the input of the other experts. With that input we did our calculations and that’s how these results came to be. We didn’t go around asking everyone if they agreed with the outcome, because that wasn’t the goal of this exercise.”

When asked whether or not we could expect ecstasy shops to rise in coming years, Van Bakkum explains: “If there is a will, politically speaking, then it would be possible. But the problem is that this is often a sensitive and complicated subject. At the end of the day we’re doing the same with cannabis now, that is something of which people used to say you couldn’t regulate. These processes take a long time and of course there are hiccups along the way. We’re not saying that policymakers need to copy the exact results from the ThinkTank, but we’re trying to indicate that it can be good to think out of the box sometimes.”

Tom Blickman, drug policy reform expert at the Transnational Institute (TNI) and one of the experts in the ThinkTank, is not amused when asked whether or not this solution could be realistic. “I find it very strange that people that come up with alternatives are always asked in what extent these are realistic, because in what extent is the current policy realistic? If you look at the amount of damage it brings, we should ask ourselves if this is really want we want.”

Still not everyone is too excited about ideas like these. Ferd Grapperhaus, recently resigned minister of Justice and Safety, said in a talk show that people who talk about legalising hard drugs, don’t realise that this would turn the Netherlands into the drain of the world. “All of these gangs from Colombia and Mexico would come over here to fabricate and distribute their trash.” Grapperhaus is part of political party CDA (Christian Democrats), for whom regulation of soft (and hard)drugs is out of the question. ‘We should not pretend like drugs are safe, instead we should prevent people from using drugs’ it states on their website. That a change might be far out of reach, could also be concluded after watching a Vice NL interview from 3 years ago. Mark Rutte (VVD), Prime Minister at the time, when asked about ecstasy policies said “this is such filthy crap, that [policy] is something that we will never change. Just because people want to kill themselves doing this, doesn’t mean we should just facilitate it.”

When asking Van Bakkum what she thinks about the Netherlands becoming the drain of the world, she explains that doing this by ourselves is complicated. “Because the Netherlands is not an island, a policy like this would be very difficult to implement. The best way to go about this, would be if you worked together with other countries, starting a coalition. I don’t think it would be very likely that the Netherlands would start a policy like this by themselves. Even now you can see that there’s a global discussion that’s starting to take place, questioning current drug policies, which often comes to the conclusion that something needs to change, because these policies just do not work.” 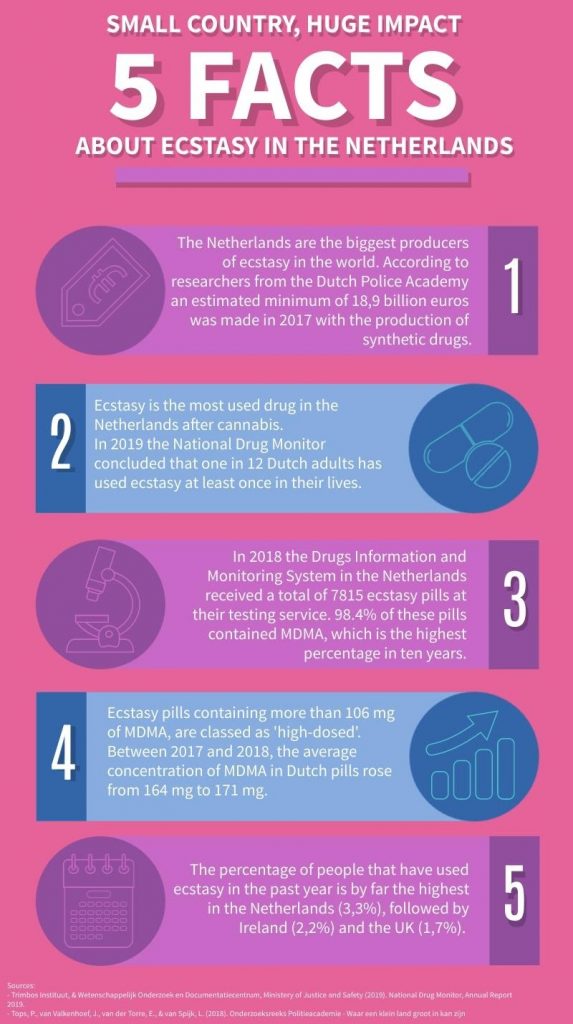 Even though opening an ecstasy shop tomorrow might seem unlikely, this is not the end of the debate, but merely the beginning. It wasn’t too long ago that the Utrecht fraction of political party D66 (Democrats 66) pleaded for a local experiment with ecstasy shops. Councillor Han Bakker stated that a shop like this would lie between a pharmacy and a liquor store, but for the sale of ecstasy. “Controlled products will be sold in limited user quantities, you get good information and you’re not allowed to enter under the age of 18.” D66 wants to put a stop to criminals’ revenue model by regulating the ‘least harmful’ drugs, like cannabis and ecstasy. They are not alone in this, as political party GroenLinks (GreenLeft) states on their website that they think ecstasy and magic mushrooms should be legalised and that police capacity shouldn’t be used against users of these substances.

Blickman is hoping for a snowball effect to happen, the same way it did with cannabis. “First Uruguay, then a number of American states, Canada and now more and more countries are discussing and considering the legalisation. Slowly but surely people are starting to realise we need to do it differently and if it happens with cannabis, other drugs will follow. Ecstasy would be the most logical next step, looking at the relatively low risk it carries.” One thing is for sure, Blickman says: “Whatever moral judgement you have against drugs, I think that rationally speaking we can all conclude that the current policy just simply does not work.”

Lara Smit is a freelance journalist and be contacted at contactlarasmit@gmail.com. Tweets @larasmitt