On Young Women and Skunk

Yesterday morning, The Times released a piece entitled ‘Middle-class, female, and smokes skunk‘, which attempts the commendable task of highlighting problematic cannabis use by a group — young women and girls — which is often overlooked in discussions about cannabis. Use of cannabis by women is underreported in the UK, but medical professionals have seen a recent increase in female skunk users coming forward to talk about their experiences.

Skunk, which is the most easily available form of cannabis in the UK, has been cultivated to have a very high level of THC (the primary psychoactive component of the plant), at the expense of the other, anxiety reducing cannabinoid, CBD. As noted in Volteface’s Tide Effect Report, “The higher the ratio of THC to CBD, the greater some scientists believe the risks to the user, particularly concerning dependence, memory impairment and psychosis.”

The Times spoke to Robin Murray, a professor of psychiatric research at the Institute of Psychiatry, King’s College, London, who explained:

Men are more enthusiastic about smoking cannabis, but women are catching up. It’s become normalised. The use of skunk has increased over recent years and therefore one would expect that its use would increase among women. We see more psychotic behaviour among young men, but I’m not at all surprised that more young women are running into difficulties.

In the article, a now 23-year old Louise Leech (not her real name) speaks about starting to smoke skunk when she was 16, a year after being diagnosed with depression. While in hospital for four months, she began to smoke on the weekends she was allowed home. Her use became more frequent (about eight or nine joints a day) while attending an ‘exclusive’ sixth-form college, and she said that she “couldn’t get up in the morning or go to bed in the evening without a smoke.”

Louise and her friends started smoking when they were teenagers, to relax and escape from stress:

I’ve always been hard on myself. Private school puts huge expectations on you. Everyone sees you doing brilliantly, but it doesn’t feel so brilliant deep down. When I wasn’t smoking, everything seemed like a disaster. My friends and I viewed smoking as a form of mindfulness. During those blissful sessions we could focus on music or whatever for an hour or two and felt a lot better about life.

This mirrors what consultant psychiatrist Dr Paul McLaren, a leading expert on addiction at the Priory’s Fenchurch Street Wellbeing Centre, told The Times:

Young, professional women are using cannabis to relax after a hard day. Skunk is the most readily available form. Just as women are moving towards men in respect of binge-drinking and cocaine use, so the same is happening with cannabis. With regular skunk use comes a marked increase in women and men who have a vulnerability to psychosis.

McLaren’s observations become particularly worrying when read alongside Louise’s story, in which she describes the stigma and shame she felt for being a cannabis user, particularly because she was a young woman. Despite the fact that about the same numbers of boys and girls smoked cannabis in her school, she said that the girls were better at hiding their use, because they saw that female smokers were viewed negatively by their male counterparts:

“Male smokers are shocked when they realise we smoke,” says Leech. “They’d say: ‘I thought you were a clean girl.’ Women don’t want to associate themselves with this ‘dirty’ tag, which is why we hide it.” 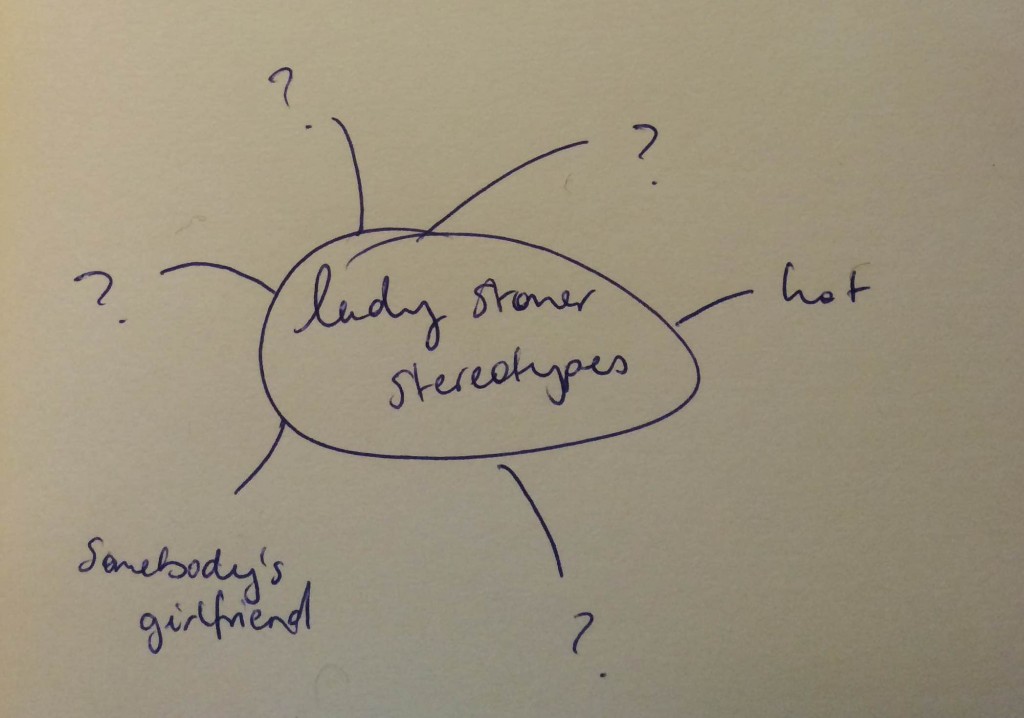 Unfortunately, The Times (hopefully unwittingly) has undone some of their good work by starting the article out with a line that continues the very stigmatisation and objectification of young women that Leech speaks about. Leech’s story is important, timely and should be shared widely, but the way in which it is presented shows how much progress the UK still has left to make when discussing drug use and when discussing young women. It is deeply frustrating and alienating to start reading an article about a peer’s struggle with her mental health and have it start out:

“With her glossy hair, glowing complexion and slender frame, Louise Leech is as far from a ‘dirty stoner’ — a user of the highly potent form of cannabis, skunk — as can be imagined.”

Did they just say all people who smoke skunk are dir— But wait! What was she wearing? Was it on trend? Did she show just the right amount of her ample cleavage with a sheer blouse that was that was perfectly demure and perfectly sexy?

It isn’t impossible, or even difficult, to write about problematic cannabis use among young women without reducing them to only their appearance in the first line… check out this excellent article published three days ago. In the US and Canada especially, cannabis use is more out in the open than ever, which leads to more knowledge and discussion about both positive and negative aspects of the plant. Open discussion by mainstream magazines and popular television shows helps to dispel the myth of the ‘dirty stoner’ that UK publications continue to perpetuate. Within the legal market, “32% of senior management positions in cannabis are actually held by women. Women are really excelling in the cannabis industry,” says Maya Elizabeth, co-founder of Whoopi & Maya.

Writing about young women in this way reinforces the exact kind of stigma that has kept so many women cannabis users from openly discussing their use by starting out this important, timely article with a Regina George-esque– “You’re SOO pretty and normal… For a stoner.” This only encourages young women like Leech to stay silent, who explains in the article, “There’s something really unfeminine about that label, which is why girls do our best to keep it hidden.”

This fear kept her from talking to her friends, family or medical professionals when she felt that her smoking had become excessive and was negatively impacting her mental health. Our recent Black Sheep report found that among people in the UK showing signs of cannabis dependence, only 14.6 % had ever received treatment, help or support. Leech only was able to get help from doctors because her father found out that she smoked by mistake:

Cannabis use is endemic in the UK. It’s time to stop pretending that all cannabis users are ‘dirty’ or ‘zombies’ and acknowledge that its smokers are as diverse as the population of the UK. It shouldn’t be this surprising that people who use the most popular drug in the world (after alcohol) don’t all fit one stereotype. We also need to stop treating drug use of any kind as ‘unfeminine’– women use drugs, and by implying that this makes them in some way less attractive than men who use drugs, we are pushing problematic users like Louise Leech away from valuable resources.

Leech sums up how we can begin to solve the problems problematic skunk users are experiencing:

“If there was a safer, legal alternative to skunk it would be easier for young women to talk about and get help. As it is we’re too afraid to admit that we’ve even touched the stuff, let alone smoke it regularly.”

Why I Came Out Of The Psychedelic Closet