Last week (19 January 2017), the Office for National Statistics published the latest crime figures for England and Wales which cover the year ending September 2016.

The statistics combine the findings from the Crime Survey for England and Wales (CSEW) and police recorded crime. CSEW figures tend to be higher as they are based on victims of crime and a significant proportion of crimes are never reported. They also tend to be more accurate in terms of measuring trends whereas police statistics can be influenced statistically by changes in recording definitions or practices.

Violent crime covers a wide range of offences including minor assaults (such as pushing and shoving), harassment and abuse (that result in no physical harm) through to wounding and homicide. The Crime Survey for England and Wales (CSEW) provides the better measure of trends in overall violent crime. The police recorded crime series is restricted to violent offences that have been reported to and recorded by the police.

Over the longer-term, levels of violent crime estimated by the CSEW have shown substantial falls. These declines continued until 2014, after which estimates of violence from the CSEW have been fairly flat for the past two years. CSEW findings for the latest survey year show no change in levels of violence compared with the previous survey year (the apparent 4% increase was not statistically significant). Similar trends have also been demonstrated in accident and emergency department violence-related attendances and NHS hospital admissions for assault. 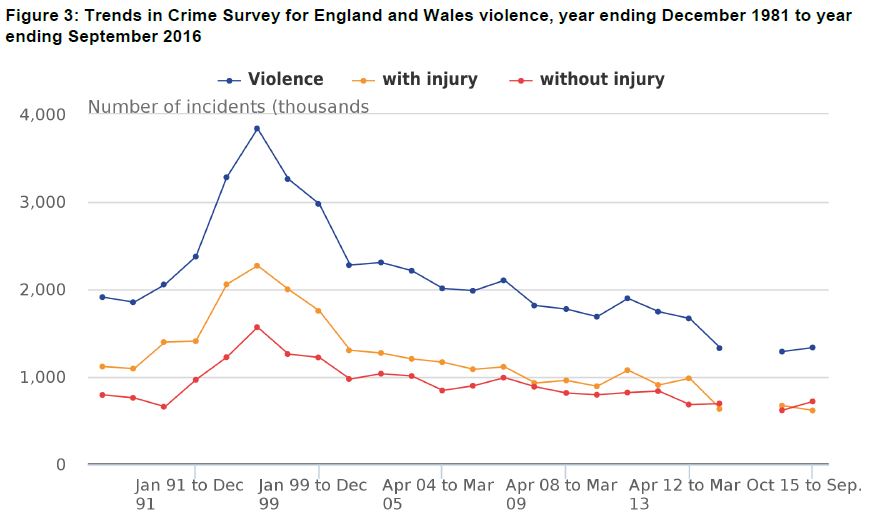 In the “violence with injury” category within police stats, there was a year-on-year increase of 12% – up to 449,844 offences. This increase includes a 23% rise in the number of attempted murder offences (a volume increase of 141) in the latest year; although these figures may also have been influenced by improvements in crime recording.

In the latest year, the police recorded an 11% increase in offences involving a knife or sharp instrument, compared with the previous year. While it is difficult to be certain what has driven this rise as these figures can be influenced by a wide range of factors, the available evidence suggests improvements in recording practices as well as an actual rise in knife crime are both likely to have contributed. Offences involving firearms in the latest year also increased, by 7% compared with the previous year.

The extent of fraud is difficult to measure because it is a deceptive crime; victimisation is often indiscriminate, covering organisations as well as individuals. Some victims of fraud may be unaware they have been a victim of crime, or that any fraudulent activity has occurred for some time after the event. Others might be unwilling to see themselves as victims or reluctant to report the offence to the authorities, feeling embarrassed that they have fallen victim. The level of fraud reported via administrative sources is thought to significantly understate the true level of such crime.

The most common types of fraud experienced are shown in the table below (“Non-investment” fraud is fraud related to online shopping or fraudulent computer service calls):

Other key findings relating to fraud were:

The latest set of crime figures are typical of recent quarterly reports — overall crime has stopped falling but is pretty stable.

There are possible indications that some categories of violent crime may be rising with the main concern being the increase in the use of weapons.

We are only just starting to explore the real extent of cybercrime (online fraud and computer offences) and it may be a year or two before we get an accurate picture of the extent of this crime and whether, as many suspect, it is growing exponentially.

This article originally appeared on russellwebster.com

Russell Webster is a blogger with over thirty years experience working in the drugs, alcohol and crime fields. He is an expert in payment by results and the strategic use of social media

[Listen] Stop and Search: Think of the Children!