We employ a number of analogies within the drug reform world – Wild West being one of the main ones. We have entered a phase of ad hoc drug laws with many caveats; it’s pretty clear to see that the police hold the keys to community relations.

We also use buzz-terms such as ‘lottery’ – it is indeed unfortunately true; it really does depend on your skin colour, your socio-economic status, your place of residence and sheer luck to determine your fate if caught in possession of a ‘controlled substance’.

A tweet by the Portland police demonstrates just what a post-reform world could look like. This simple social media interaction gives hope to the remaining US States, and the UK’s constabularies, that relationships between communities and the police can be re-forged once rational policies take hold. In Oregon, where cannabis is legal, the police are recommending citizens buy from reputable outlets. 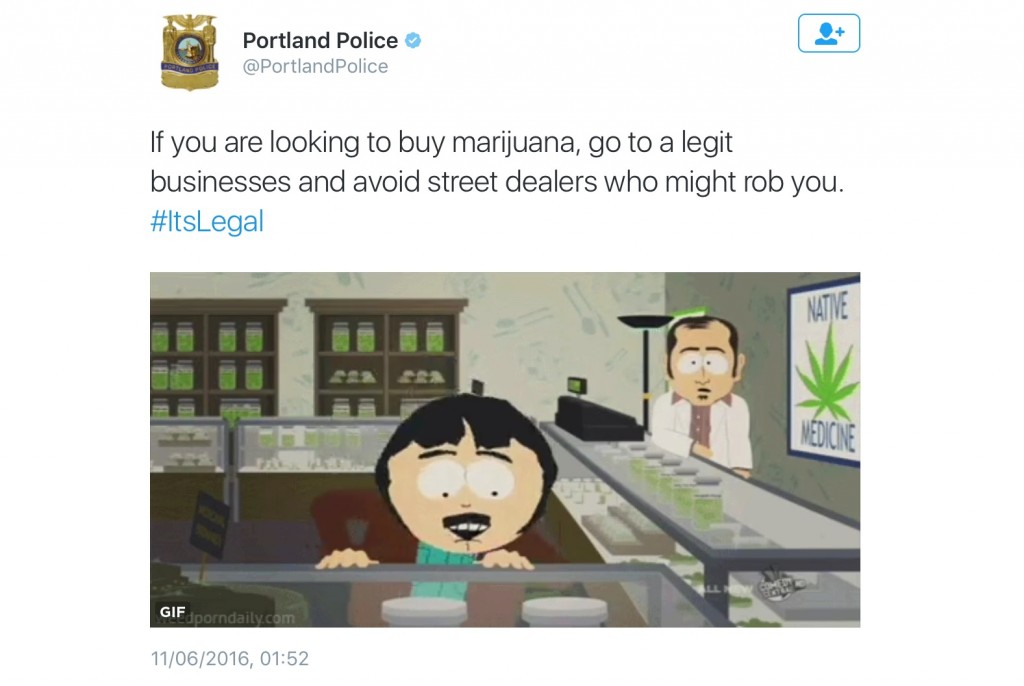 In contrast, with cannabis still a Class B substance, the UK has a mixed bag when it comes to the police and their enforcement.

Durham have led the way in making it clear that low level drug possession is no longer a priority. It’s perhaps not a coincidence that Durham also received an ‘outstanding’ rating from the HMIC, the only constabulary to do so. Ron Hogg was twice elected to the role of Durham PCC by a considerable margin, an indication that communities are seeing the merits of incremental drug law reforms in practice. Ron Hogg’s re-election, with over 50% of the vote, goes to show that his doorstep popularity is mirrored at the ballot box – Ron’s simple drug law de-prioritisation, which has received a lot of media attention, has only strengthened his bonds to his representative community.

When Durham was used as an example in the media, constabularies such as Dorset, Surrey, Avon and Somerset and Derbyshire also made it clear as to their similar positions, stating cannabis was no longer a priority. 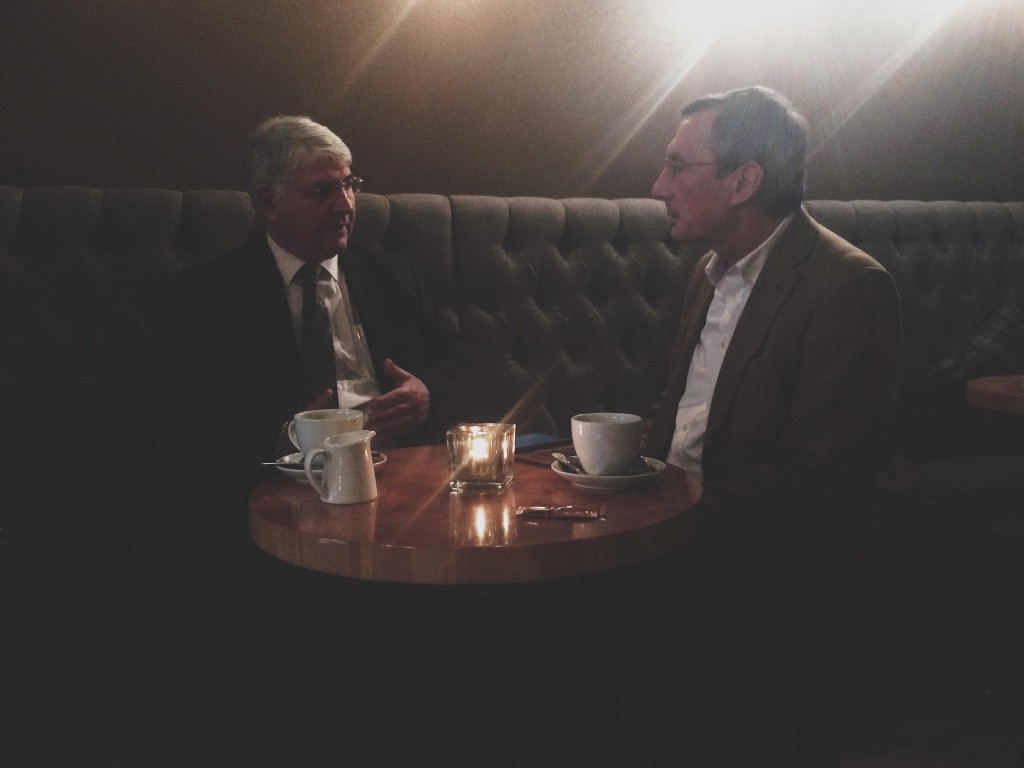 In recent weeks, Gloucestershire have gone on record with a mixture of messages.

It began by stating it would fully enforce cannabis laws, but PCC Martin Surl cautiously clarified that cannabis was not at the forefront of their priorities.

It’s fair to say that this isn’t just a case of ‘a tale of two cities’, but it’s become saga of a few cities. All the while punitive policies exist, there’s a real and ingrained danger in community fallout between the police and those who are disproportionately hit by drug laws. In the Release report, ‘The Numbers in Black and White’, which looks at the disparities in drug law enforcement, it found that:

Across London black people are charged for possession of cannabis at 5 times the rate of white people. For cannabis warnings the rate is 3 times.

Perhaps one of the more subtle, yet most harmful facets of our drug laws is that of the criminal record.

Every year approximately 80,000 people in England and Wales are convicted or cautioned for possession of drugs. In the 15 year period, 1996 to 2011, 1.2 million criminal records have been generated as a result of drug possession laws.

In 2010 the Crown Prosecution Service brought more prosecutions for possession of drugs than have been bought in any year since the introduction of the Misuse of Drugs Act 1971 43,406 people were found guilty of drug possession. This was primarily driven by prosecution for cannabis possession.

Despite a trend downwards, with the BBC reporting that there’s been a 46% drop in cannabis arrests since 2010, this still doesn’t ameliorate the harm and divide between the police and those who are more vulnerable to disproportionate enforcement – we may have a quiet revolution of de facto decriminalisation, but it doesn’t go far enough to prevent the tangible harms at street level. 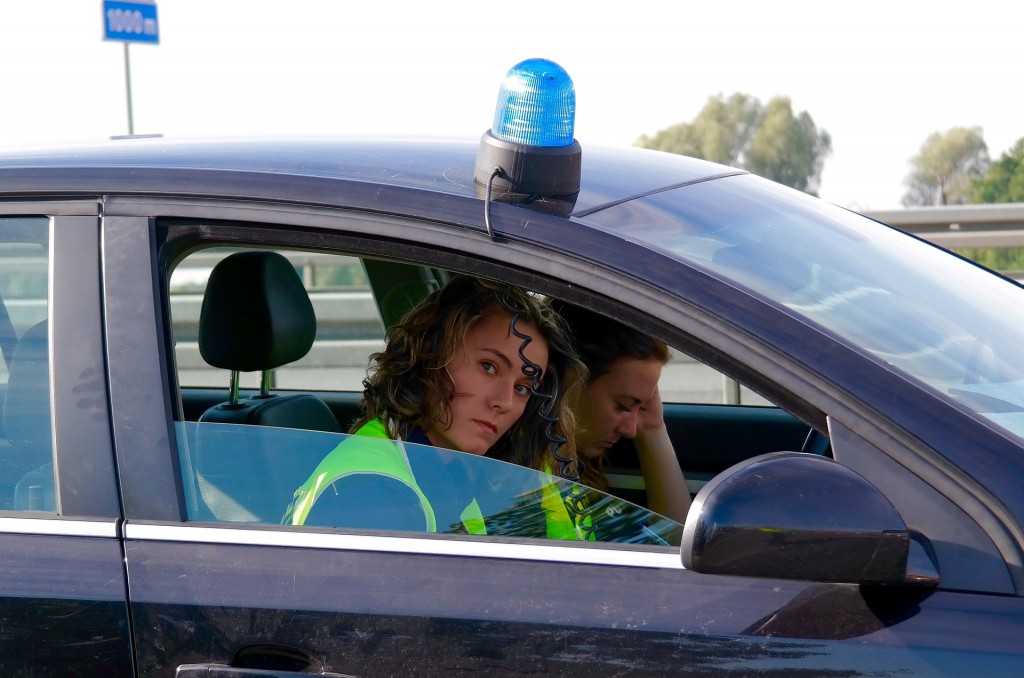 Stop and Search remains the most insidious arm to the enforcement of drug laws.

Over half a million stop searches were carried out in England and Wales every year for drugs – this is matched with only a 7% arrest rate. It’s easy to see how this will drive a wedge between community relationships and the police.

Not every UK force is ready to give up the chase: 2,327 people were arrested for cannabis possession in the West Midlands in 2015; this is up from 1,618 in the previous year. Once more, this 40% increase demonstrates that a clichéd postcode lottery is all too real.

As we try to forge a consensus for drug enforcement and real reforms, we really must see how any talk of a rise in arrests, or Stop and Searches, is firmly anchored in the past and a more historic perception of how to deal with drugs. It’s abundantly clear that Portland Police’s tweet, urging ‘customers’, ordinarily law abiding citizens, to buy their cannabis from a reputable source is a glimpse of the future – and it’s a scenario that could sweep across the United States. We can walk a quiet path to reform, but we really do need a louder call for decriminalisation (with a view to regulation) if we’re serious about reinstating trust between communities and the police.

Jason Reed is the Director of LEAP UK and a regular VolteFace contributor. Tweets @JasonTron

The Volteface Podcast #11: Live from the Big Tent with Andrew Boff